Comments (0)
Add to wishlistDelete from wishlist
Cite this document
Summary
United Kingdom is a country which is much inclined to sports. From time immemorial, the said country is participating on various sporting events in and outside the country. Also, it is an established fact that there are varieties of sporting events that are adopted and propagated by the aforementioned country…
Download full paperFile format: .doc, available for editing
HIDE THIS PAPERGRAB THE BEST PAPER96.4% of users find it useful 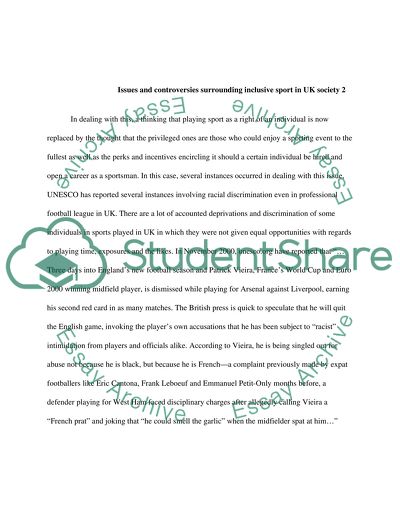 Download file to see previous pages With this, there are a lot of individuals who are prompted to involve and even develop themselves into several sporting events. There are statistical data which states that there are national or professional athletes who are not passionate with the sport that they are playing but do play because of money.
In dealing with this, one might say that sporting in UK would mean career and employment opportunities for some. There are a lot of spectators who are saying that these kinds of occurrences really prompted people to go on several sports as a career. However, they also stated that some even though not that physically capable and deserving are pushing them to become a part of the national team or play on major commercial leagues. Such occurrences are well-documented. In further dealing with this, there are also irregularities and deprivation which are happening in different fields of sports in UK. These occurrences have something to do with racism, gender and sometimes social status between the rich and the poor and the disabled one.
In dealing with this, a thinking that playing sport as a right of an individual is now replaced by the thought that the privileged ones are those who could enjoy a sporting event to the fullest as well as the perks and incentives encircling it should a certain individual be hired and open a career as a sportsman. In this case, several instances occurred in dealing with this issue, UNESCO has reported several instances involving racial discrimination even in professional football league in UK. There are a lot of accounted deprivations and discrimination of some individuals in sports played in UK in which they were not given equal opportunities with regards to playing time, exposures and the likes. In November 2000, unesco.org have reported that "Three days into England's new football season and Patrick Vieira, France's World Cup and Euro 2000 winning midfield player, is dismissed while playing for Arsenal against Liverpool, earning his second red card in as many matches. The British press is quick to speculate that he will quit the English game, invoking the player's own accusations that he has been subject to "racist" intimidation from players and officials alike. According to Vieira, he is being singled out for abuse not because he is black, but because he is French-a complaint previously made by expat footballers like Eric Cantona, Frank Leboeuf and Emmanuel Petit-Only months before, a defender playing for West Ham faced disciplinary charges after allegedly calling Vieira a "French prat" and joking that "he could smell the garlic" when the midfielder spat at him"

CHECK THESE SAMPLES OF Inclusive sport in UK society

... movements are formed with the idea of lowering the hazards that were caused by what was referred to as “progression” in the modern society. People of all social classes understand the dangers associated with global warming and are coming together to find a lasting solution. Other social movements such as those advocating gender equality, social inclusion and religion amongst others enhance social integration that the modern society did not accomplish (Martin 1996 p 47). Nations in the post-modern society are tending to lose their significance as globalization of industries continues to lead to the emergence of strong multinational organizations that are more powerful than many sovereign nations. More over, states are tending to privatize...
7 Pages(1750 words)Essay

Johnson et al highlight that external macro-economic factors intrinsically impact strategy management and without accounting for macroeconomic factors in strategy development and management, a business will fail (Johnson et al, 2008, p.3). If we consider this contextually with regard to the UK grocery market; the move demise of the local high street store to the dominance of supermarkets in the past 20 years has radically transformed the grocery market ( Henry, 2008, p.77). For example, the DEFRA Economic Note on UK Grocery Retailing (2006) indicates that in addition to continued growth in the UK Grocery Retail sector; approximately “3/4 sales are made in supermarkets and superstores… with traditional small retailers...
13 Pages(3250 words)Assignment
sponsored ads
Save Your Time for More Important Things
Let us write or edit the essay on your topic "Inclusive sport in UK society" with a personal 20% discount.
GRAB THE BEST PAPER

Let us find you another Essay on topic Inclusive sport in UK society for FREE!