Comments (0)
Add to wishlistDelete from wishlist
Cite this document
Summary
It may be helpful to understand a little about divorce and the typical effects it has on men, women and children. The divorce rate in the United States is the highest in the world. Fifty percent of marriages end in divorce
Many families all over the world go through divorce, the rate for divorce is about 40%-60% for newly married and 50%-70% for those who remarry…
Download full paperFile format: .doc, available for editing
HIDE THIS PAPERGRAB THE BEST PAPER96.1% of users find it useful 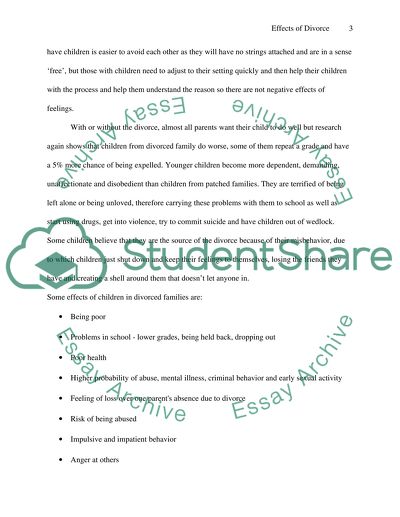 Extract of sample "Effects of divorce on children"

Download file to see previous pages It is obvious that no parent likes to experience the divorce, so why would they want their child do experience it Regretfully, divorce is quite common in present-day society, but researchers have proved that there is a negative impact on the children and their future. A lot of children do not recover from a divorce and their inability to cope with it affects their relationships later on. When parents decide that they will have a divorce, it is not in happiness as most children seem to feel.
A recently divorce man/woman will feel a loss concerning their spouse and their marriage. There is also a sense of relief that the faade is over and they can start healing themselves against the pain and suffering they were going through. For those people that do not have children is easier to avoid each other as they will have no strings attached and are in a sense 'free', but those with children need to adjust to their setting quickly and then help their children with the process and help them understand the reason so there are not negative effects of feelings.
With or without the divorce, almost all parents want their child to do well but research again shows that children from divorced family do worse, some of them repeat a grade and have a 5% more chance of being expelled. Younger children become more dependent, demanding, unaffectionate and disobedient than children from patched families. They are terrified of being left alone or being unloved, therefore carrying these problems with them to school as well as start using drugs, get into violence, try to commit suicide and have children out of wedlock. Some children believe that they are the source of the divorce because of their misbehavior, due to which children just shut down and keep their feelings to themselves, losing the friends they have and creating a shell around them that doesn't let anyone in.
Some effects of children in divorced families are:
Being poor
Problems in school - lower grades, being held back, dropping out
Poor health
Higher probability of abuse, mental illness, criminal behavior and early sexual activity
Feeling of loss over one parent's absence due to divorce
Risk of being abused
Impulsive and impatient behavior
Anger at others
Oppositional, rebellious, defiant, or conduct problems
Breaking rules and testing limits
Destructive behavior
Anger at self
Self-blame or guilt
Self-destructive or self-harming behavior
Apathy or failure to accept responsibility
Isolation and Withdrawal
Becoming divorced themselves someday
Yearly, over 1 million American children experience the tragedy of divorce, and half the children that are born within the year will have parents who will divorce before they turn 18. American society has to teach it citizens that marriage is the best surroundings in which to raise healthy, happy children who reach their potential and family is the essential item for a social well-being.
The best thing that parents can do for their child while the divorce is to assure them that the divorce is not the child's fault and to tell them constantly assure them that they are loved by both parents and the relationship with either parent will not be ...Download file to see next pagesRead More
Share:
Tags
Cite this document
(“Effects of divorce on children Essay Example | Topics and Well Written Essays - 1500 words”, n.d.)
Effects of divorce on children Essay Example | Topics and Well Written Essays - 1500 words. Retrieved from https://studentshare.org/miscellaneous/1500984-effects-of-divorce-on-children

CHECK THESE SAMPLES OF Effects of divorce on children

Despite the few negative incidences of crime committed by the United States of America’s security troops that were deployed in the country on a peacekeeping mission.
Since the war in Korea began in the early nineteen fifties, the United States has stationed tens of thousands of soldiers, mostly the United States’ army personnel, in South Korea. Through the assistance of the South Korean troops and other neighboring governments, the American troops have been able to guard and offer maximum security to South Korean people. In line with the argument of James (2003), ‘most of the military bases in South Korea are relatively isolated’ thus the need for much attention from the troops so as to ensure maximum...
10 Pages(2500 words)Assignment
sponsored ads
Save Your Time for More Important Things
Let us write or edit the essay on your topic "Effects of divorce on children" with a personal 20% discount.
GRAB THE BEST PAPER

Let us find you another Essay on topic Effects of divorce on children for FREE!