Psychological effects of Propaganda in relation to Totalitarianism - Essay Example

Comments (0)
Add to wishlistDelete from wishlist
Cite this document
Summary
In a general sense propaganda is the dissemination of information with the view to spread and promote a particular idea or attitude. It is otherwise referred to as psychological warfare. Linebarger defines propaganda as the "planned use of any form of communication designed to affect the minds, emotions, and action of a given group for a specific purpose" (qtd…
Download full paperFile format: .doc, available for editing
HIDE THIS PAPERGRAB THE BEST PAPER92.2% of users find it useful 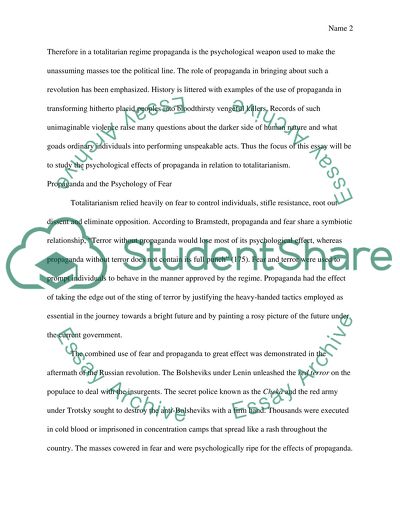 Extract of sample "Psychological effects of Propaganda in relation to Totalitarianism"

Download file to see previous pages Totalitarianism is a new form of government falling into the general classification of dictatorship, a system in which technologically advanced instruments of political power are wielded without restraint by centralized leadership of an elite movement for the purpose of affecting a total social revolution, including the conditioning of man on the basis of certain arbitrary ideological assumptions, proclaimed by the leadership in an atmosphere of coerced unanimity of the entire population. (qtd. in Linz 66).
Therefore in a totalitarian regime propaganda is the psychological weapon used to make the unassuming masses toe the political line. The role of propaganda in bringing about such a revolution has been emphasized. History is littered with examples of the use of propaganda in transforming hitherto placid peoples into bloodthirsty vengeful killers. Records of such unimaginable violence raise many questions about the darker side of human nature and what goads ordinary individuals into performing unspeakable acts. Thus the focus of this essay will be to study the psychological effects of propaganda in relation to totalitarianism.
Totalitarianism relied heavily on fear to control individuals, stifle resistance, root out dissent and eliminate opposition. According to Bramstedt, propaganda and fear share a symbiotic relationship, "Terror without propaganda would lose most of its psychological effect, whereas propaganda without terror does not contain its full punch" (175). Fear and terror were used to prompt individuals to behave in the manner approved by the regime. Propaganda had the effect of taking the edge out of the sting of terror by justifying the heavy-handed tactics employed as essential in the journey towards a bright future and by painting a rosy picture of the future under the current government.
The combined use of fear and propaganda to great effect was demonstrated in the aftermath of the Russian revolution. The Bolsheviks under Lenin unleashed the red terror on the populace to deal with the insurgents. The secret police known as the Cheka and the red army under Trotsky sought to destroy the anti-Bolsheviks with a firm hand. Thousands were executed in cold blood or imprisoned in concentration camps that spread like a rash throughout the country. The masses cowered in fear and were psychologically ripe for the effects of propaganda. Agitation propaganda had been employed by Lenin via inflammatory publications like the Pravda to discredit the Tsarist regime and to fan the flames of revolution. Having seen the revolution to its bloody end and by demonstrating their might the Bolsheviks set about establishing a totalitarian system. Propaganda was used to garner popular support for the government and to enlighten the masses about the benefits of communism. People were led to believe that communism was the panacea for all their problems and the rewards were manifold for those who embraced its tenets. Needless to say the masses were convinced and thus propaganda bolstered by fear laid the groundwork for the development of a powerful Soviet Russia.
The Nazis used a like combination of propaganda ...Download file to see next pagesRead More
Share:
Tags
Cite this document
(“Psychological effects of Propaganda in relation to Totalitarianism Essay”, n.d.)
Psychological effects of Propaganda in relation to Totalitarianism Essay. Retrieved from https://studentshare.org/miscellaneous/1500650-psychological-effects-of-propaganda-in-relation-to-totalitarianism

“Psychological Effects of Propaganda in Relation to Totalitarianism Essay”, n.d. https://studentshare.org/miscellaneous/1500650-psychological-effects-of-propaganda-in-relation-to-totalitarianism.
Comments (0)
Click to create a comment or rate a document

Despite the few negative incidences of crime committed by the United States of America’s security troops that were deployed in the country on a peacekeeping mission.
Since the war in Korea began in the early nineteen fifties, the United States has stationed tens of thousands of soldiers, mostly the United States’ army personnel, in South Korea. Through the assistance of the South Korean troops and other neighboring governments, the American troops have been able to guard and offer maximum security to South Korean people. In line with the argument of James (2003), ‘most of the military bases in South Korea are relatively isolated’ thus the need for much attention from the troops so as to ensure maximum...
10 Pages(2500 words)Assignment
sponsored ads
Save Your Time for More Important Things
Let us write or edit the essay on your topic "Psychological effects of Propaganda in relation to Totalitarianism" with a personal 20% discount.
GRAB THE BEST PAPER

Let us find you another Essay on topic Psychological effects of Propaganda in relation to Totalitarianism for FREE!