Comments (0)
Add to wishlistDelete from wishlist
Cite this document
Summary
After the end of World War II, the Blacks became increasingly active socially. Discrimination in the military services and in the work force challenged them from getting any important positions. In the South, Blacks had been put to near slavery conditions with the Black Codes and the Jim Crow Laws…
Download full paperFile format: .doc, available for editing
HIDE THIS PAPERGRAB THE BEST PAPER96.1% of users find it useful 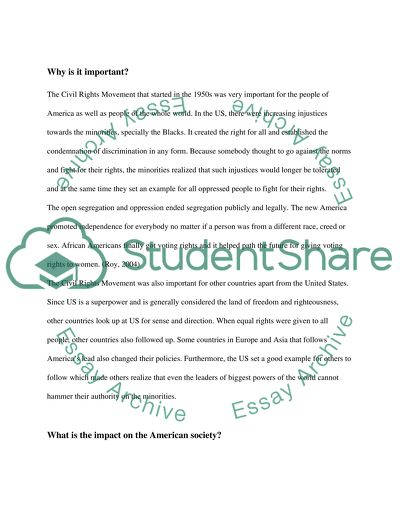 Extract of sample "The Civil Rights Movement in 1960"

Download file to see previous pages (Encarta, 2008)
With the formation of NAACP (National Association for the Advancement of Colored People) in 1909 an organized struggle for equality for blacks began. The event that triggered the eventual Civil Rights Movement was when a Black lady, Rosa Parks, refused to give her seat to a White person in a public bus. She was arrested for non-compliance and put in jail. The refusal to give up the seat led to an eight month strike of the bus system in Montgomery. During this time the black community organized their own carpools and deprived the government of the income that came from black riders. The eight-month strike put a severe financial burden on the city and thus the Supreme Court ruled that bus segregation was unconstitutional and ended the strike. (Mkmba, 2005) ("Origins of the Civil Rights Movement", 1994)
The Civil Rights Movement that started in the 1950s was very important for the people of America as well as people of the whole world. In the US, there were increasing injustices towards the minorities, specially the Blacks. It created the right for all and established the condemnation of discrimination in any form. Because somebody thought to go against the norms and fight for their rights, the minorities realized that such injustices would longer be tolerated and at the same time they set an example for all oppressed people to fight for their rights.
The open segregation and oppression ended segregation publicly and legally. The new America promoted independence for everybody no matter if a person was from a different race, creed or sex. African Americans finally got voting rights and it helped path the future for giving voting rights to women. (Roy, 2004)
The Civil Rights Movement was also important for other countries apart from the United States. Since US is a superpower and is generally considered the land of freedom and righteousness, other countries look up at US for sense and direction. When equal rights were given to all people, other countries also followed up. Some countries in Europe and Asia that follows America's lead also changed their policies. Furthermore, the US set a good example for others to follow which made others realize that even the leaders of biggest powers of the world cannot hammer their authority on the minorities.
What is the impact on the American society
The impact of the Civil Rights Movement has time and again been seen from a positive and a negative perspective. The achievement of purpose of the Movement has been questioned and critics have been discussing this for a long time.
On a positive front, changes have taken place in the social and legal context. These changes are not only for Blacks, but for all. The human race is imperfect. Everybody has some flaws within themselves which a nation cannot expect to correct. Civil Rights Movement was about making the majorities realize that the minorities existed and they wanted to have some rights. The goal wasn't to remove all racism. Such a happening could never workout since all humans are different and have different values and emotions. What the Civil Rights Movement did was to provide a /legal mean to the minorities to challenge the injustices committed against them. Anyone who feels that he/she is being discriminated, ...Download file to see next pagesRead More
Share:
Tags
Cite this document
(“The Civil Rights Movement in 1960 Essay Example | Topics and Well Written Essays - 1000 words”, n.d.)
The Civil Rights Movement in 1960 Essay Example | Topics and Well Written Essays - 1000 words. Retrieved from https://studentshare.org/miscellaneous/1500640-the-civil-rights-movement-in-1960

CHECK THESE SAMPLES OF The Civil Rights Movement in 1960

...Hello, I have read this and thinks it’s perfect I have slight amendments which are highlighted in red. thanks Universal Declaration of Human Rights Introduction Human rights are defined as, the basic standards by which we can identify and measure inequality and fairness. These rights are specified in the Universal Declaration of Human Rights.1 The United Nations adopted the Universal Declaration of Human Rights (UDHR) on the 10th of December 1948. It consists of a number of civil, cultural, economic, political, and social rights. Although, it is not legally binding, it provides an authoritative interpretation of several articles of the UN Charter; and the latter is binding on the member states of the United Nations.2 There are several...
8 Pages(2000 words)Case Study
sponsored ads
Save Your Time for More Important Things
Let us write or edit the essay on your topic "The Civil Rights Movement in 1960" with a personal 20% discount.
GRAB THE BEST PAPER

Let us find you another Essay on topic The Civil Rights Movement in 1960 for FREE!