Comments (0)
Add to wishlistDelete from wishlist
Cite this document
Summary
A. Attention: Last semester, 20 year-old Leesa was a 4.0 student on a full scholarship and an active participant in campus activities. This semester, Leesa struggles to make it to class, has been placed on academic probation, and is losing her financial support…
Download full paperFile format: .doc, available for editing
HIDE THIS PAPERGRAB THE BEST PAPER97.8% of users find it useful 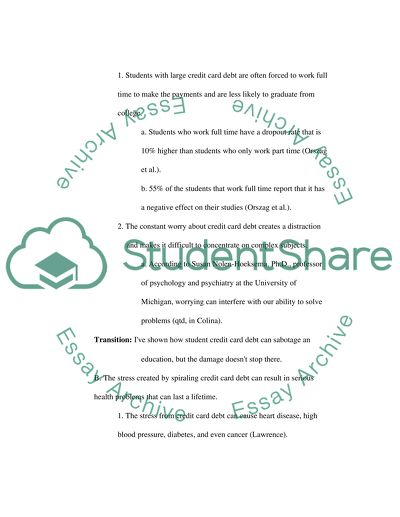 Bank Lending - Principles for the Management of Credit Risk

Risk Management Group of the Basel Committee on Banking Supervision defines credit risk as “potential that a borrower or counterparty of a financial institution will fail to meet the obligations in accordance with the agreed terms” (bcbs54, 1999). Such deviations from the obligations result in market distortions and cause several woes to both; the bank and the counterparty. Although the risks involved with sanction of a credit is to a large extent intangible; banks can; and in fact to a large extent have been successful in mitigating the risks involved. Effective risk mitigation requires the establishment of appropriate credit risk environment, which can facilitate the creditors to analyze the risks involved in grantin...
9 Pages(2250 words)Coursework

... remark about contingent liability might enlighen. Contingent liabilities are those under which one or more conditions have to be fulfilled before the obligation takes effect, and therefore may entail some risk. External debt can be classified into 1) public or publicly guaranteed debt, 2) private non-guaranteed credits, 3) central bank deposits, 4) and loans due to the IMF. The Reserve Bank of Australia (RBA) provides its own definition of gross and net external debt. To the RBA gross external debt includes borrowings by both the private and government sectors, and net external debt represents the gross external debt less lending by Australian residents to non residents. A qualification is added: Debt is not the only form of external...
10 Pages(2500 words)Assignment

... specifically of increasing the debt for government bailouts due to financial institutions being irresponsible regarding subprime mortgages or credit default swaps but his basic philosophy of the working class paying for the whims of the upper class was accurate. To add insult to injury, those who are flush with cash invest in federal bonds which are used to fund the debt that workers are paying for through taxes which are directly deducted from their paychecks. “Taxpayers pay interest to the rich bondholders of that national debt. The rich make money both ways in the creation of the debt and the interest paid on it” (Taylor, 2010). History of the National Debt The National Debt was initiated four years after the ratification...
9 Pages(2250 words)Coursework

Unfortunately the United States into a new debt in the Second World War. In 1941, the gross domestic product was 45 percent; it rose up to 119 percent in 1946 probably at the end of t...

... Reasons for Debt Crisis The ‘Moment of Truth report’ outlines the looming economic crisis that is bound to hit the American nation if certain policies are not changed. Debt is steadily increasing with most citizens unwilling to sacrifice their spending to guarantee sustainable growth of the country. This aspect jeopardizes the ability of future generations to acquire resources for their survival. Apart from this the report formulates proposals that could ensure change is implemented and appreciated by the American people. It calls for political unity and advocacy to come up with better ideas to change the current debt situation. Federal debt is one of the very few, but crucial reason that is leading to the looming fiscal crisis...
6 Pages(1500 words)Assignment
sponsored ads
Save Your Time for More Important Things
Let us write or edit the essay on your topic "Credit Card Debt" with a personal 20% discount.
GRAB THE BEST PAPER

Let us find you another Essay on topic Credit Card Debt for FREE!