Comments (0)
Add to wishlistDelete from wishlist
Cite this document
Summary
The irony of the so called globalization coupled with technological advancement and the presence of a great number of people living in poverty leaves us wondering whether these developments in the society has turned man into a machine who no longer recognizes the feelings of compassion towards other people…
Download full paperFile format: .doc, available for editing
HIDE THIS PAPERGRAB THE BEST PAPER93.4% of users find it useful 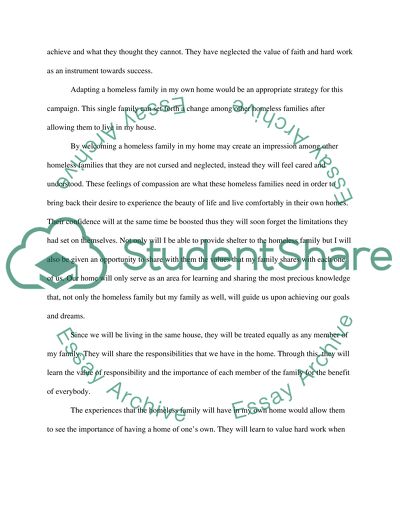 Altruism in Society Campaign (Homelessness) The irony of the so called globalization coupled with technological advancement and the presence of a great number of people living in poverty leaves us wondering whether these developments in the society has turned man into a machine who no longer recognizes the feelings of compassion towards other people. These days, only a few individuals are aware of the sufferings of other human beings. Most are driven with self-interest and rely on material possessions for security. They have neglected the fact that there are families who possess nothing and have nowhere to live. Man has become selfish along with the developments in the society.
Putting first the interest of others above your own ("Altruism," para 1) is an ethical system August Compte, a French philosopher, had proposed ("What is Altruism," para 2). When the society acknowledges the importance of altruism, they will be motivated to develop cooperation rather than conflict. Harmony among nations will be attained and peace will be a reality ("What is Altruism," para 3)
In a social campaign against homelessness, one can become an altruist who can be happy when we see others live in a place they can call their home. We are well aware that most of our homeless neighbors are those who were brought up in an environment where people are non-educated - who had given up on their dreams. Their achievement has been to create a boundary within themselves limiting their abilities and skills to achieve more than what they have. Most of the homeless people in the society have created a border between what they thought they can achieve and what they thought they cannot. They have neglected the value of faith and hard work as an instrument towards success.
Adapting a homeless family in my own home would be an appropriate strategy for this campaign. This single family can set forth a change among other homeless families after allowing them to live in my house.
By welcoming a homeless family in my home may create an impression among other homeless families that they are not cursed and neglected, instead they will feel cared and understood. These feelings of compassion are what these homeless families need in order to bring back their desire to experience the beauty of life and live comfortably in their own homes. Their confidence will at the same time be boosted thus they will soon forget the limitations they had set on themselves. Not only will I be able to provide shelter to the homeless family but I will also be given an opportunity to share with them the values that my family shares with each one of us. Our home will only serve as an area for learning and sharing the most precious knowledge that, not only the homeless family but my family as well, will guide us upon achieving our goals and dreams.
Since we will be living in the same house, they will be treated equally as any member of my family. They will share the responsibilities that we have in the home. Through this, they will learn the value of responsibility and the importance of each member of the family for the benefit of everybody.
The experiences that the homeless family will have in my own home would allow them to see the importance of having a home of one's own. They will learn to value hard work when they see the members of my family work hard in order for us to live comfortably. Soon, they will learn to adopt these values, as well as they will learn to live and dream once again.
As an ordinary member of the society, we cannot provide these homeless families the shelter that they need. The least we can do is teach them to strive and work hard for themselves to have a home they can call as their own.
References & Works Cited:
Altruism. Retrieved from http://www.howyoucanchangetheworld.com/alt.htm on December 8,
2007.
What Is Altruism Retrieved from http://www.altruists.org/about/altruism/ on December 8, 2007. Read More
Share:
Tags
Cite this document
(“Altruism in Society Campaign Essay Example | Topics and Well Written Essays - 500 words”, n.d.)
Altruism in Society Campaign Essay Example | Topics and Well Written Essays - 500 words. Retrieved from https://studentshare.org/miscellaneous/1500531-altruism-in-society-campaign

CHECK THESE SAMPLES OF Altruism in Society Campaign

Morrison scrutinizes the community with its internal conflict between the rising middle class and the lower classes but also points out its responsibility in the main character’s downfall. In fact, through the character of Pecola Breedlove, an 11-year-old girl who struggles to get accepted in her community because of her perceived standard of beauty, Morrison exposes the drama about the concept of beauty in the American society. Indeed, Pecola’s longing for blue eyes reflects her understanding of beauty according to white principles and features that pose a serious self-esteem problem for African Americans. This statement exposes the problem:
Morrison addresses the instability in the black family that has dire con...
15 Pages(3750 words)Book Report/Review
sponsored ads
Save Your Time for More Important Things
Let us write or edit the essay on your topic "Altruism in Society Campaign" with a personal 20% discount.
GRAB THE BEST PAPER

Let us find you another Essay on topic Altruism in Society Campaign for FREE!