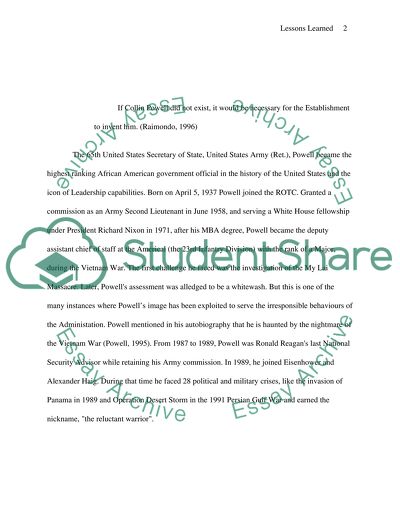 Download file to see previous pages The first challenge he faced was the investigation of the My Lai Massacre. Later, Powell's assessment was alledged to be a whitewash. But this is one of the many instances where Powell's image has been exploited to serve the irresponsible behaviours of the Administation. Powell mentioned in his autobiography that he is haunted by the nightmare of the Vietnam War (Powell, 1995). From 1987 to 1989, Powell was Ronald Reagan's last National Security Advisor while retaining his Army commission. In 1989, he joined Eisenhower and Alexander Haig. During that time he faced 28 political and military crises, like the invasion of Panama in 1989 and Operation Desert Storm in the 1991 Persian Gulf War and earned the nickname, "the reluctant warrior".
Militant about defending the "hardwon civil rights legislation of 1960's, General Colin Powell made famous the so-called Powell Doctrine, as part of the attitude to be considered while considering the 1990-1991 Gulf War. The Doctrine asserts that when a nation is engaging in war, all resources should be brought into action to affect an overwhelming force against the enemy. The questions that Powell Doctrine centers on are the issues of national security based on a clear and attainable objective fully analyzing the risks and costs, the full utilization of all non-violent policies, a plausible exit strategy to avoid endless entanglement, the consequences of American government action, support received from the American people on any particular action, and the presence of international support.
Leadership is the art of accomplishing more that the science of management says it possible. (Harari, 2002)
Leadership connotes an interrelationship of power - the power to give vision to others, and not just be a frontrunner. In the Leadership Character ModelSM developed by Robert Turknett and Carolyn Turknett in 2005 in their Decent People, Decent Company: How to Lead with Character in Work and in Life, they prescribe Accountibility, Responsibility and Integrity as some of the characters of a leader. Powell too, practiced people-based leadership that gave him an edge. A leader, as Powell believed and practiced himself, must challenge the status quo of all traditions. (Harari, 2002). Effective Leadership is a true test of character, and Colin Powell's life has been a testimony to this.
In the study of his 35 years of military experience, we find a galore of instances where Powell used the basic human emotions of trust and belief in order to get over tricky situations. Powell rarely proposed military intervention as the first solution to any dispute, and instead advocated compromise. In the 2000 U.S. Presidential Election, Powell served as the key foreign policy advisor to the Bush campaign. After September 11, this public icon played a crucial role in taking up a single-handed leadership to enhance America's relationship with international countries. In an interview by O'Rourke of the Atlantic Unbound, Powell says:
I'm considered the multilateralist-multilateralism means finding areas of compromise. Our nation also rests on a non-zero-sum concept. It was intended that Congress work by finding compromise, and from compromise you achieve consensus. Without compromise, you never get to ...Download file to see next pagesRead More
Share:
Tags
Cite this document
(“Lessons Learned Book Review on Colin Powell Essay”, n.d.)
Lessons Learned Book Review on Colin Powell Essay. Retrieved from https://studentshare.org/miscellaneous/1500475-lessons-learned-book-review-on-colin-powell

Analysis of The Bookseller of Kabul Book by Asne Seierstad

Most individuals and families construct public impressions of themselves somewhat different from reality: they have privacy rights to do so. All people have habits which they practice only when they are conscious that they are entirely unobserved. It is unethical by most standards to publish for profit, information gained by surreptitious means.

Human rights are violated on grounds of sex, skin color, ethnicity, age, economic status, beliefs, and nationality. Every attempt to correct such uncivilized discrimination is worthy of support, which gives the work under review undeniable value. Since free world access to Afghanistan is so restricted, we must assume that the book under review is entirely representative of conte...
11 Pages(2750 words)Book Report/Review

“Visions in Conflict” has a threefold purpose. The first of these is to express much of the good work being done in the field of conflict resolution and peacebuilding around the world. This is especially relevant in the areas of acknowledgment and understanding of the “other” (including interfaith dialogue); communication through conflict and forgiveness. Second, this compilation aims to open up the field in ord...
8 Pages(2000 words)Book Report/Review

The focus of this exposition is the book of Isaiah chapter 61: 1-11.  The King James Version of the Bible is used as well as the Judaica Press Complete Tanach Yeshayahu Chapter 61.  The Jewish Publication Society Tanach (1917) is also used.  Lastly, Rashi’s commentary is referred to as well.  It is worthy of mention that both the Jewish and Christian perspectives are explored here and that, in the true essence of research, one is not favored over the other.  Isaiah Ben Amoz was considered a prophet in his time. He was known to predict the deliverance of Jerusalem from the Assyrians. Jerusalem was freed from the control of the Assyrians in 701 B.C. which added to his credibility as a prophet. The whol...
13 Pages(3250 words)Research Proposal

Critical Analysis of Joel Bakans Argument in the Corporation Book

...Business and society: Critical analysis of Joel Bakan’s argument in the book The Corporation Introduction Corporations refer to business entities constituted by a group of people with similar interest in profitability. Just like any other businesses, corporations exist solely to make a profit and therefore do everything logically possible to ensure that they sustain their interests. It is this aggressive view of business that Joel Bakan argues, in his book, that this has made corporations more pathological. Corporations exists in the society, they therefore interact with the society on a daily basis and even share some fundamental resources. Bakan argues that societies sustain the corporations that exist among them. It thus becomes natural...
6 Pages(1500 words)Term Paper
sponsored ads
Save Your Time for More Important Things
Let us write or edit the essay on your topic "Lessons Learned Book Review on Colin Powell" with a personal 20% discount.
GRAB THE BEST PAPER

Let us find you another Essay on topic Lessons Learned Book Review on Colin Powell for FREE!