Comments (0)
Add to wishlistDelete from wishlist
Cite this document
Summary
The research was performed by identifying some of the key related issues in each of the segments of the marketing audit. In the internal analysis of the museum, we identify factors such as the availability, levels of utilization of the resources. In this scenario, the major resources present for the museum are the finances, the location of the museum…
Download full paperFile format: .doc, available for editing
HIDE THIS PAPERGRAB THE BEST PAPER96.5% of users find it useful 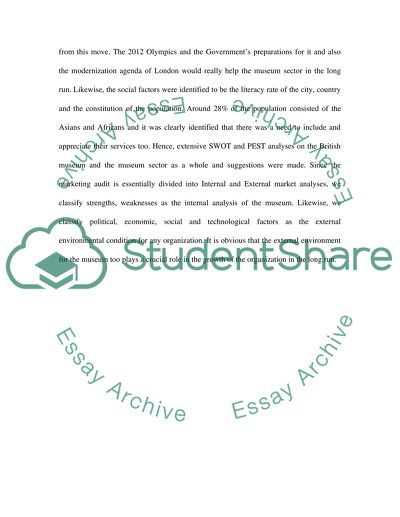 Download file to see previous pages Coming to the Political factors which can influence the museum, it was identified that the Mayor's commission on the inclusion of Asian and African settlers in London into the Heritage could play an instrumental role in deciding if the museum would get the required support from the Greater London Association (GLA) for its further needs. It could also play a role in making a political impression, which could go a long way in the museum's growth.
The 2012 Olympics and its preparations were also taken into consideration while formulating the political factors. At this juncture when the Government of UK was looking forward to make rapid changes to the city of London in a big way and also promote tourism, it is an undisputable fact that the museums would directly be impacted from this move. The 2012 Olympics and the Government's preparations for it and also the modernization agenda of London would really help the museum sector in the long run. Likewise, the social factors were identified to be the literacy rate of the city, country and the constitution of the population. Around 28% of the population consisted of the Asians and Africans and it was clearly identified that there was a need to include and appreciate their services too. Hence, extensive SWOT and PEST analyses on the British museum and the museum sector as a whole and suggestions were made. Since the marketing audit is essentially divided into Internal and External market analyses, we classify strengths, weaknesses as the internal analysis of the museum. Likewise, we classify political, economic, social and technological factors as the external environmental condition for any organization. It is obvious that the external environment for the museum too plays a crucial role in the growth of the organization in the long run.
Marketing Audit and Recommendations
It is a well-known fact that the British museum in London is one of the world's greatest museums of human history and culture. Its collections, which number more than 13 million objects from all continents, illustrate and document the story of human culture from its beginning to the present. is a point of controversy whether museums should be allowed to possess artefacts taken from other countries, and the British Museum is notable target for criticism (Albert Gunther, 2003).The Elgin marbles and the Benin Bonzes are among the most disputed objects in its collections, and organisations have been formed demanding the return of both sets of artefacts to their native countries of Greece and Nigeria respectively. The British Museum has refused to return either set, or any of its other disputed items, stating that the "restitutionist premise, that whatever was made in a country must return to an original geographical site, would empty both the British Museum. The Museum has also argued that the British Museum Act of 1963 legally prevents it from selling any of its valuable artefacts, even the ones not on display.
Internal Environment Analysis
The Weaknesses
Lack of funds, has clearly paralyzed the prospects of development of the museum in a real big way. Under funding has clearly caused discontent among the employees of the organization. In fact there were instances when the employees had gone off their duties in order to protest the government's attitude towards the museum. At a time when ...Download file to see next pagesRead More
Share:
Tags
Cite this document
(“Marketing For Non-profit Organizations Case Study”, n.d.)
Marketing For Non-profit Organizations Case Study. Retrieved from https://studentshare.org/miscellaneous/1500288-marketing-for-non-profit-organizations

CHECK THESE SAMPLES OF Marketing For Non-profit Organizations

Even so, we particularly think of scientists as the ones responsible for the destruction caused during World War II. In spite of the uses of atomic physics in improving our daily life most usually associate it with Hiroshima and Nagasaki and the atomic bombings that changed the way, people think about science.
Rhodes describes that the development of atomic physics began with Rutherford’s experiment on gold sheets which lead to the idea of what an atom is like. This model of the atom was not perfect but even so, it did provide a basic idea about the arrangement of sub-atomic particles within an atom. Rutherford’s model was supported by the discovery of the neutron by Chadwick. This model was further improved later...
7 Pages(1750 words)Essay
sponsored ads
Save Your Time for More Important Things
Let us write or edit the case study on your topic "Marketing For Non-profit Organizations" with a personal 20% discount.
GRAB THE BEST PAPER

Let us find you another Case Study on topic Marketing For Non-profit Organizations for FREE!