Comments (0)
Add to wishlistDelete from wishlist
Cite this document
Summary
A marketing plan for Far Horizon should consider some economic concepts that will affect the company's operations. First, it should consider the state taxes that will be deducted from its net income; this will greatly affect how much is scraped-off from its Earnings Before Income Taxes…
Download full paperFile format: .doc, available for editing
HIDE THIS PAPERGRAB THE BEST PAPER92.2% of users find it useful 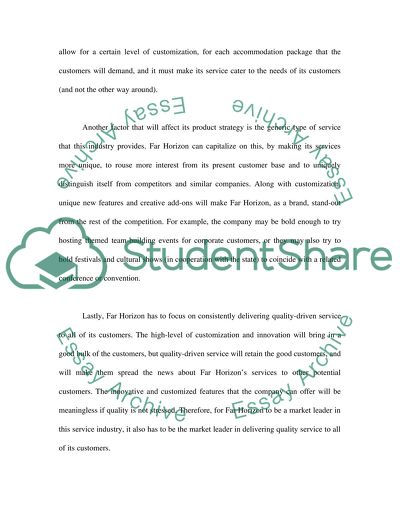 Download file to see previous pages Lastly, it should be aware of the income level of its target market, so that it can appropriately price the goods and services that it will offer, to match the market's willingness to purchase.
Far Horizon has to make a product strategy that is very sensitive to its customers unique needs, as well as one that is innovative and quality-driven. The customers for this type of service are very scrutinizing, in a way that each set of customers have very unique needs, which might not be the same which the next set of customers. Far Horizon must therefore avoid the scenario where it will commoditize its products, in a way that it provides the same type of service to its different customers. Instead, the company must allow for a certain level of customization, for each accommodation package that the customers will demand, and it must make its service cater to the needs of its customers (and not the other way around).
Another factor that will affect its product strategy is the generic type of service that this industry provides. Far Horizon can capitalize on this, by making its services more unique, to rouse more interest from its present customer base and to uniquely distinguish itself from competitors and similar companies. Along with customization, unique new features and creative add-ons will make Far Horizon, as a brand, stand-out from the rest of the competition. For example, the company may be bold enough to try hosting themed team-building events for corporate customers, or they may also try to hold festivals and cultural shows (in cooperation with the state) to coincide with a related conference or convention.
Lastly, Far Horizon has to focus on consistently delivering quality-driven service to all of its customers. The high-level of customization and innovation will bring in a good bulk of the customers, but quality-driven service will retain the good customers, and will make them spread the news about Far Horizon's services to other potential customers. The innovative and customized features that the company can offer will be meaningless if quality is not stressed. Therefore, for Far Horizon to be a market leader in this service industry, it also has to be the market leader in delivering quality service to all of its customers.
Place Strategy
The most obvious factor that would affect Far Horizon's place strategy is its proximity to highways, airports or other transportation hubs. More and more customers would want to avail of Far Horizon's services, if the place was immediately accessible from public highways and airports.
Another factor that can affect the company's place strategy is the scenic view that surrounds the place. While the company should focus on delivering customized and innovative quality service, it can also factor in the scenic surroundings around the place, to further enhance the company's image.
Lastly, the overall attractiveness of the city or state of location affects the image that the company will project to its customers. If the city or state is known to maintain a high level of crime and theft, for example, then customers will still not be attracted to avail of Far Horizon's services. On the other hand, if the city or state has a good reputation among business and socio-civic organizations, then more customers will ...Download file to see next pagesRead More
Share:
Tags
Cite this document
(“Far Horizon's case study Essay Example | Topics and Well Written Essays - 2500 words”, n.d.)
Far Horizon's case study Essay Example | Topics and Well Written Essays - 2500 words. Retrieved from https://studentshare.org/miscellaneous/1500188-far-horizons-case-study

If we make a comparison of the past and present concept of leadership we will find that it has been revisited and has undergone a major shift. Leadership is no longer about managing people or supervising and controlling them. It is more of giving them direction, motivating them and gets the best out of them. Leadership is not about leading the people from the front and having an authoritative standpoint. Leaders in today’s generation will cultivate teamwork, be open to their subordinates. Also, they will show the same level of commitment and understanding of their colleagues and peers. The idea is to create something new and unique to be ahead of the time. Throughout history, we have seen the leadership ability of many perso...
6 Pages(1500 words)Assignment

...Opinion paper The Declaration of Helsinki by the WHO clearly s that in clinical trials involving humans the wellbeing of the should be of prime importance than the interest of science or society. This has been stated because at times in order to achieve the objectives of a study the investigators might overlook the welfare of the trial subjects thus jeopardizing their health in the process. According to ethical rules while comparing two treatment options the control group of the study must receive the best known treatment available while the study subjects are given a potential newer treatment. Only when there is no effective treatment available a placebo-controlled group can be used for the study. There have been several trials which have...
7 Pages(1750 words)Essay
sponsored ads
Save Your Time for More Important Things
Let us write or edit the essay on your topic "Far Horizon's case study" with a personal 20% discount.
GRAB THE BEST PAPER

Let us find you another Essay on topic Far Horizon's case study for FREE!