Comments (0)
Add to wishlistDelete from wishlist
Cite this document
Summary
Evaluate and discuss the potential liability (negligence or other torts) of the various parties in this case. Be sure to discuss the elements of negligence as they apply to each party separately, and also discuss the application of EMTALA.
Ace Sports built and installed the basketball backboard and rim; but were negligent as small pieces of metal were sticking out from the rim; that led to the injury…
Download full paperFile format: .doc, available for editing
HIDE THIS PAPERGRAB THE BEST PAPER91.8% of users find it useful 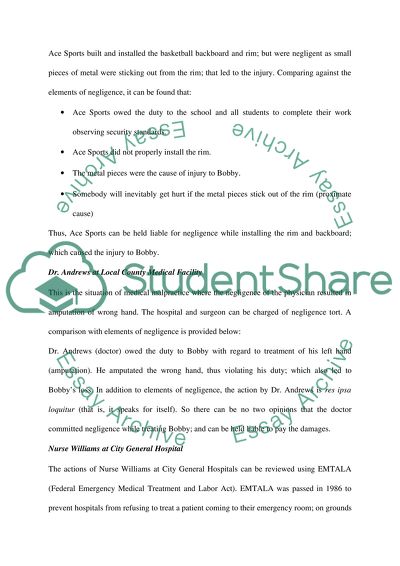 Download file to see previous pages Dr. Andrews (doctor) owed the duty to Bobby with regard to treatment of his left hand (amputation). He amputated the wrong hand, thus violating his duty; which also led to Bobby's loss. In addition to elements of negligence, the action by Dr. Andrews is res ipsa loquitur (that is, it speaks for itself). So there can be no two opinions that the doctor committed negligence while treating Bobby; and can be held liable to pay the damages.
The actions of Nurse Williams at City General Hospitals can be reviewed using EMTALA (Federal Emergency Medical Treatment and Labor Act). EMTALA was passed in 1986 to prevent hospitals from refusing to treat a patient coming to their emergency room; on grounds of not having enough money or insurance to pay for the treatment. The Act places two main obligations on hospitals (Lafferty, 2000):
2. If it can be established that the patient's condition is in fact, an emergency; the hospital must take steps to 'stabilize' the condition before the patient can be asked to contact any other hospital for detailed treatment.
In the given case, a screening examination was not conducted to determine the severity of wounds. Although, Nurse Williams attended Bobby immediately and put towels on his wound, probably to stop the flow of blood; and may be this would be presented by the hospital in defense. Yet there is no evidence that any screening examination was carried out to ascertain if the condition can be classified as emergency; and any attempt to 'stabilize' the emergency condition other than above which can hardly be classified as an attempt to stabilize Bobby's condition. The delay thus caused, resulted in deteriora36tion of the injury, which ultimately resulted in amputation. Bobby and his parents can sue ...Download file to see next pagesRead More
Share:
Tags
Cite this document
(“Legal Aspects of Health Care Case Study Example | Topics and Well Written Essays - 1000 words”, n.d.)
Retrieved from https://studentshare.org/miscellaneous/1499994-legal-aspects-of-health-care-case-study

The Duty of Care

... that conclusion, be treated as the real, substantial, direct or effective cause, and the other dismissed as at best a causa sine qua non and ignored for purposes of legal liability….’25 The ‘last clear chance rule’ introduced in Davies v. Mann may operate to implicate Malheatan Hospital. In this case the court found that if proximate cause can be attributed to a lack of proper care and/or conduct by the defendant, he will be liable in damages to the plaintiff. This rule would operate notwithstanding the unlawful act of the plaintiff or any other defendant.26 W. Friedman counters that the ‘last opportunity doctrine’ has evolved to be synonymous with ‘responsibility’ for the injury itself.27 At the same time, the fact that the attending...
10 Pages(2500 words)Case Study

Legal Environment of Business and Employment

...Legal Environment of Business and Employment QUESTION ONE Winston saw a diamond ring in Brudders Field Jewellery shop, which he desired to buy. He placed a note in the shop’s letter box, stating his intention to purchase that ring for the price specified on the tag. The liability of Winston, with regard to breach of contract can be assessed, by examining whether there is a legally binding agreement between him and the shop owner. An agreement can be a statement or actions between two parties. Whenever, two parties come to an agreement regarding some matter that is to their mutual benefit; and negotiate dealings to that end, it can be concluded that these parties’ actions are in accordance with some undetected agreement between them...
9 Pages(2250 words)Case Study

...Running Head: Adolescent Case Study on Juvenile Delinquency Introduction For quite a long time, criminal justice mechanism and implementation have been difficult with respect to the problematic teenagers. Generally, the age group of 13 to 18 years is marked as the adolescent population. Unfortunately, these young people often fall victim to the irregularities and problems of modern lifestyle (Butterworth, D. A., & Wikstrom, P. H., 2007). Australia is no exception to this situation, and the number of cases of lawbreaking by adolescents is on the rise. The wide spectrum of social issues involved in the problematic behaviour patterns of today’s teenagers cannot be neglected. However, advanced researches in Forensic Mental Health can formulate...
8 Pages(2000 words)Case Study

Legal Drinking Age in the U.S

50 states had adopted the 21 legal drinking age limit by 1988. Before this legislation came into effect, fraternities had kegs in open places in the university, gatherings of students on campus included beer and university administrators including police often strolled through the fraternity parties ensuring that everything was under control.

Mothers Against Drunk Driving, (MADD)’s well-intentioned leaders succeeded in convincing politicians that voting against the bill was a favor of drunken driving. With this concerted effort, the bill gained a unanimous passage in both the Senate and the House. MADD’s website indicates that the National Highway Traffic Safety Administration approximations show that the n...
6 Pages(1500 words)Case Study
sponsored ads
Save Your Time for More Important Things
Let us write or edit the case study on your topic "Legal Aspects of Health Care Case Study" with a personal 20% discount.
GRAB THE BEST PAPER

Let us find you another Case Study on topic Legal Aspects of Health Care Case Study for FREE!