Comments (0)
Add to wishlistDelete from wishlist
Cite this document
Summary
It has been argued that every business's practice to maximize profits. Profit maximization is "the ability to deliver highly available and desirable offerings at minimal cost" as defined by Dortch (2005). This is common sense. Maximizing profits will help to increase sales, retain customers, draw in new customers, keep inventory fresh, and so much more…
Download full paperFile format: .doc, available for editing
HIDE THIS PAPERGRAB THE BEST PAPER98.8% of users find it useful 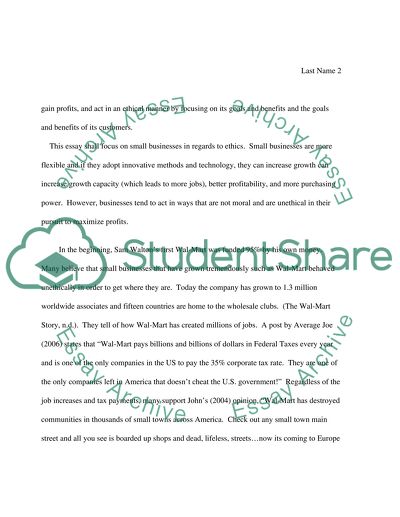 Extract of sample "Wal-Mart--Are they doing anything unethical"

Download file to see previous pages Business ethics should be followed or consequences will result which can be detrimental to all. Machan (2003) lists the meaning of business ethics as "a discipline specializing in the examination of answers to the questions 'How should I act' or 'What standards ought I use to guide my conduct'...Business ethics assumes commerce and business are, as a rule, morally proper." In the quest to maximize profits, some businesses do not act in an ethical manner. It is an ever-increasing problem as business acquire more profits, they tend to behave in an unethical manner. However, a business can still maximize profits,
This essay shall focus on small businesses in regards to ethics. Small businesses are more flexible and if they adopt innovative methods and technology, they can increase growth can increase growth capacity (which leads to more jobs), better profitability, and more purchasing power. However, businesses tend to act in ways that are not moral and are unethical in their pursuit to maximize profits.
In the beginning, Sam Walton's first Wal-Mart was funded 95% by his own money. Many believe that small businesses that have grown tremendously such as Wal-Mart behaved unethically in order to get where they are. Today the company has grown to 1.3 million worldwide associates and fifteen countries are home to the wholesale clubs. (The Wal-Mart Story, n.d.). They tell of how Wal-Mart has created millions of jobs. A post by Average Joe (2006) states that "Wal-Mart pays billions and billions of dollars in Federal Taxes every year and is one of the only companies in the US to pay the 35% corporate tax rate. They are one of the only companies left in America that doesn't cheat the U.S. government!" Regardless of the job increases and tax payments, many support John's (2004) opinion, "Wal-Mart has destroyed communities in thousands of small towns across America. Check out any small town main street and all you see is boarded up shops and dead, lifeless, streetsnow its coming to Europe and doing the same thing because for every mom and pop store that's thrown on the scrap heap other local jobs are lost as well."
Last Name 3
And although Wal-Mart may be creating jobs while it is destroying jobs, the more Wal-mart lowers its prices, more customer loyalty is created. This leads to lower rates of pay in other countries such as China in order to justify for the lower prices. A corporation such as Wal-Mart can pressure to shut down cheap warehouses in third world countries such as Mexico because their workers were making too much.
As corporations get bigger especially as huge as Wal-Mart has become, they "are in positions of power that allow them to do greater damage to others when they act immorally or unethically or socially irresponsibly" as Why Bother With Ethics (n.d.), reports. One blogger Eli (2005) posts, "Do you know where all of those cheap products are being producedThose products were OUTSOURCED taking THOUSANDS of jobs ...Download file to see next pagesRead More
Share:
Tags
Cite this document
(“Wal-Mart--Are they doing anything unethical Essay”, n.d.)
Wal-Mart--Are they doing anything unethical Essay. Retrieved from https://studentshare.org/miscellaneous/1499845-wal-mart-are-they-doing-anything-unethical

“Wal-Mart--Are They Doing Anything Unethical Essay”, n.d. https://studentshare.org/miscellaneous/1499845-wal-mart-are-they-doing-anything-unethical.
Comments (0)
Click to create a comment or rate a document

CHECK THESE SAMPLES OF Wal-Mart--Are they doing anything unethical

It also has a display of properties typified through the organisms like the reaction of its environment as well as directing the various efforts for self-replication. Like bacteria, viruses are rather microscopic and induce human diseases. However, unlike bacteria, the nature of viruses is of acellular in particles (which means that they do not comprise of living cells such as plants and animals). Instead, they consist of central cores of RNA or DNA coupled in protein coatings (Marshall Cavendish Corporation. 2007).
The viruses do not have properties for living things as they do not have any energy for metabolism hence do not grow in a bid to eradicate the production of waste products. They have no response to any form of sti...
6 Pages(1500 words)Article
sponsored ads
Save Your Time for More Important Things
Let us write or edit the essay on your topic "Wal-Mart--Are they doing anything unethical" with a personal 20% discount.
GRAB THE BEST PAPER

Let us find you another Essay on topic Wal-Mart--Are they doing anything unethical for FREE!