Comments (0)
Add to wishlistDelete from wishlist
Cite this document
Summary
School councils are democratically elected groups of students who represent their peers and enable pupils to become partners in their own education, making a positive contribution to the school environment and ethos. (Wyse 2001)
School Councils have been used in British schools for about the past ten years…
Download full paperFile format: .doc, available for editing
HIDE THIS PAPERGRAB THE BEST PAPER91.4% of users find it useful 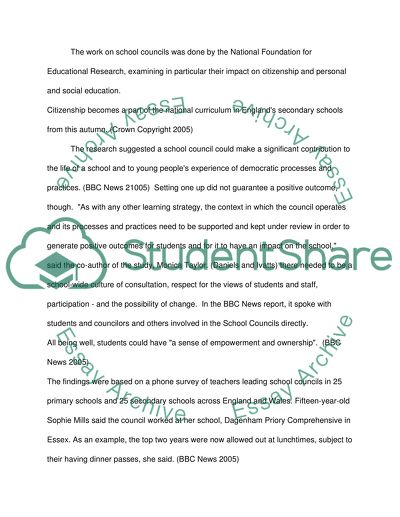 School councils are democratically elected groups who represent their peers and enable pupils to become partners in their own education, making a positive contribution to the school environment and ethos. (Wyse 2001)
School councils make a positive contribution to every aspect of the school community. They:
improve academic performance
reduce bullying and vandalism
reduce school exclusions
improve teacher-pupil relations (Daniels and Ivatts 2003)
School Councils have been used in British schools for about the past ten years. According to a BBC News report, School councils - giving students a say in how their schools are run - are given a vote of confidence by researchers." (2005) They suggest that student councillors and their teachers feel the councils benefit the school as a whole. "The youngsters involved also learn about society and citizenship as well as developing their personal skills. " (BBC News 2005)
In a separate survey by BT and the charity Childline, only 47% of the children questioned said adults listened to what they said and acted on it. (Anderson 2004) Most adults agreed it was important to listen to children, but only 57% said this happened. The effectiveness of these School Councils is not as positive as some of the media would like for us to think. There has been recent research on the School Counsils and the results are similar to the ones revealed by Anderson (2000)
The work on school councils was done by the National Foundation for Educational Research, examining in particular their impact on citizenship and personal and social education.
Citizenship becomes a part of the national curriculum in England's secondary schools from this autumn. (Crown Copyright 2005)
The research suggested a school council could make a significant contribution to the life of a school and to young people's experience of democratic processes and practices. (BBC News 21005) Setting one up did not guarantee a positive outcome, though. "As with any other learning strategy, the context in which the council operates and its processes and practices need to be supported and kept under review in order to generate positive outcomes for students and for it to have an impact on the school," said the co-author of the study, Monica Taylor. (Daniels and Ivatts) there needed to be a school-wide culture of consultation, respect for the views of students and staff, participation - and the possibility of change. In the BBC News report, it spoke with students and councilors and others involved in the School Councils directly.
All being well, students could have "a sense of empowerment and ownership". (BBC News 2005)
The findings were based on a phone survey of teachers leading school councils in 25 primary schools and 25 secondary schools across England and Wales. Fifteen-year-old Sophie Mills said the council worked at her school, Dagenham Priory Comprehensive in Essex. As an example, the top two years were now allowed out at lunchtimes, subject to their having dinner passes, she said. (BBC News 2005)
In conclusion, it must be taken into consideration that the process is still fairly new. The research that has been conducted does not take this into account. The School Councils were implemented for the benefit of the entire educational process and it appears that some of this vision has gotten lost along the way.
References
Alderson, J. (2004) Civil Rights in Schools, ESRC Research
Briefing No. 1
Crown Copyright. (2005) "Higher Standards, Better Schools For All More choice for parents and pupils Higher Standards, Better Schools For All More choice for parents and pupils" Presented to Parliament by the Secretary of State for Education and Skills by Command of Her Majesty
Daniel, P. & Ivatts, J. (2000) Children and Social Policy,
(ch.7) Macmillan
Hammarberg, T. (1997) A school for children with right,
UNICEF
Wyse, D. (2001) 'Felt tip pens and school Councils:
Children's participation Rights in Four
English Schools' Children & Society, Vol. 15(4) Read More
Share:
Tags
Cite this document
(“School councils Essay Example | Topics and Well Written Essays - 500 words”, n.d.)
School councils Essay Example | Topics and Well Written Essays - 500 words. Retrieved from https://studentshare.org/miscellaneous/1499427-school-councils

CHECK THESE SAMPLES OF School councils

As a result, the school asked the boys to stay away from school till the investigation was completed and Ali was thus excluded from school for successive periods from 9th March to 6th June 2001. Schoolwork was sent to the defendant’s home and he was allowed to sit for his SAT tests between 8th and 14th May 2001. The school then referred the student to the LEA for the continuation of his education with no further work being assigned to the student by the school after 14th May.
On 18th June 2001, the Prosecution informed Ali’s solicitors that the case was being discontinued for lack of evidence and this was formally executed the following day. The respondent approached the school with his brother and requested re-e...
6 Pages(1500 words)Case Study

...Do We Need a High School Diploma or College Degree to Be Successful Today? Why or Why Not? by I must say that success is a very ive concept and much would depend on how one understands it. Though it may seem that we decide for ourselves how we define this phenomenon, it is still dependent on the surrounding and culture. For an Indian boy and an American girl of the same age being successful can mean completely different things. In the Eastern culture living one`s life decently and reaching spiritual harmony, having your family healthy and wealthy, and being respected by the members of commune is success. For people of Western culture being successful often means being wealthy first of all (having a big house and two cars), being in happy...
8 Pages(2000 words)Scholarship Essay
sponsored ads
Save Your Time for More Important Things
Let us write or edit the essay on your topic "School councils" with a personal 20% discount.
GRAB THE BEST PAPER

Let us find you another Essay on topic School councils for FREE!