The Good, the Bad, and Your Business - Essay Example

Comments (0)
Add to wishlistDelete from wishlist
Cite this document
Summary
In the increasingly competitive business environment, managers are continually faced by tough situations and ethical dilemmas that need to be dissected with utmost caution if their businesses are to survive. The primary goal of business entities is to make profits for their shareholders…
Download full paperFile format: .doc, available for editing
HIDE THIS PAPERGRAB THE BEST PAPER95.6% of users find it useful 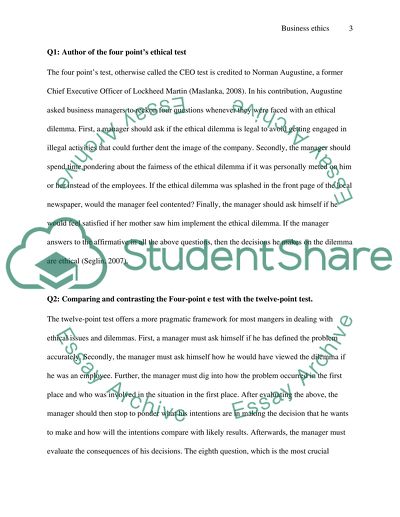 Extract of sample "The Good, the Bad, and Your Business"

Download file to see previous pages The pressure to make the correct business decisions is often unbearable to many managers. Indecision, anxiety, or a misstep can bring the company to its knees in today's highly competitive economy. While ethical dilemmas remain unsolved, employee morale can plummet, productivity can drop off, business competitors can take a large proportion of your profits, and dissatisfied customers can free (Seglin, 1999). This is bad news for business managers. It is on this premise that Jeffrey L. Seglin wrote the book, The Good, the Bad, and Your Business to give business managers some useful insights on how to conduct their businesses more efficiently and navigate through their everyday moral business dilemmas. Business mistakes can put a decent professional in serious ethical troubles. This essay attempts to answer some ethical considerations and questions using the above named book.
The four point's test, otherwise called the CEO test is credited to Norman Augustine, a former Chief Executive Officer of Lockheed Martin (Maslanka, 2008). In his contribution, Augustine asked business managers to reckon four questions whenever they were faced with an ethical dilemma. First, a manager should ask if the ethical dilemma is legal to avoid getting engaged in illegal activities that could further dent the image of the company. Secondly, the manager should spend time pondering about the fairness of the ethical dilemma if it was personally meted on him or her instead of the employees. If the ethical dilemma was splashed in the front page of the local newspaper, would the manager feel contented Finally, the manager should ask himself if he would feel satisfied if her mother saw him implement the ethical dilemma. If the manager answers to the affirmative in all the above questions, then the decisions he makes on the dilemma are ethical (Seglin, 2007).
Q2: Comparing and contrasting the Four-point e test with the twelve-point test.
The twelve-point test offers a more pragmatic framework for most mangers in dealing with ethical issues and dilemmas. First, a manager must ask himself if he has defined the problem accurately. Secondly, the manager must ask himself how he would have viewed the dilemma if he was an employee. Further, the manager must dig into how the problem occurred in the first place and who was involved in the situation in the first place. After evaluating the above, the manager should then stop to ponder what his intentions are in making the decision that he wants to make and how will the intentions compare with likely results. Afterwards, the manager must evaluate the consequences of his decisions. The eighth question, which is the most crucial question, is whether the manager can engage the affected party in discussing the problem before making a final judgment. Afterwards, the manager should stop to ponder about the longevity of the decision he makes. Will it appear valid over a long period of time as it appears now Another crucial question for the manager is whether he could disclose the decisions that he has made to his boss, CEO, board of directors, the society, and family members without any misgivings. The manager should also consider the symbolic potential of the action he is about to take. Finally, the mana ...Download file to see next pagesRead More
Share:
Tags
Cite this document
(“The Good, the Bad, and Your Business Essay Example | Topics and Well Written Essays - 3250 words”, n.d.)
The Good, the Bad, and Your Business Essay Example | Topics and Well Written Essays - 3250 words. Retrieved from https://studentshare.org/miscellaneous/1499125-the-good-the-bad-and-your-business

“The Good, the Bad, and Your Business Essay Example | Topics and Well Written Essays - 3250 Words”, n.d. https://studentshare.org/miscellaneous/1499125-the-good-the-bad-and-your-business.
Comments (0)
Click to create a comment or rate a document

CHECK THESE SAMPLES OF The Good, the Bad, and Your Business

The self-assessment has been used to further set long term and short term goals and decide on the different resources and support that will be required to meet those goals and objectives. Likewise, there is a commitment on the part of both the student to work to the best...
7 Pages(1750 words)Assignment

After the emergence of new business technologies, the overall business management has greatly improved. Now we have better tools and techniques business management. The use of modern and up-to-date technology in the business always offers better support to the business in managing and organizing the organization’s resources. However, the implementation of information technology at business is a challenging task that requires extensive resources, knowledge, and planning. Club IT nightclub aimed to implement a new a...
8 Pages(2000 words)Case Study

... few ethical theories that will allow analysis of the case study in a critical manner. Utilitarianism (Mill, pp. 20-43, 2001) is one of the prominent ethical theories of contemporary era that although traces back historically; however, ethical experts have continued to consider it until today. In order to evaluate the case from a Utilitarian’s perspective, it is essential to understand the basics of this ethical theory. In this regard, consequentialism (Mill, pp. 29-50, 2001) is the foremost and most important concept in the ethical theory of Utilitarianism that evaluates every situation based on its consequences. For instance, a bad action with good consequences will be an ethical action from a Utilitarian’s point of view (Mill, pp. 24-41...
10 Pages(2500 words)Case Study

...Introduction Globalization, one of the most hotly debated issues means global capitalism to some while others consider it to be the continuation of modernism with the forces of wealth, progress, democracy and happiness at play (Kellner, 2002). Globalization is considered to be beneficial which promotes economic prosperity, cultural diversity and technological advancement. According to the critical social theory, technology and capital work together to create a new globalized and interconnected world. While each force of globalization is important, technological revolution has impacted the business models, value creation and differentiation (Spelman, 2010). The cloud computing technologies that have made the popular social networking...
7 Pages(1750 words)Coursework
sponsored ads
Save Your Time for More Important Things
Let us write or edit the essay on your topic "The Good, the Bad, and Your Business" with a personal 20% discount.
GRAB THE BEST PAPER

Let us find you another Essay on topic The Good, the Bad, and Your Business for FREE!