Comments (0)
Add to wishlistDelete from wishlist
Cite this document
Summary
I will define expectations of good social work, how I have been able to look after children, foster careers, and birth families and professionals. I will highlight the importance…
Download full paperFile format: .doc, available for editing
HIDE THIS PAPERGRAB THE BEST PAPER92.1% of users find it useful 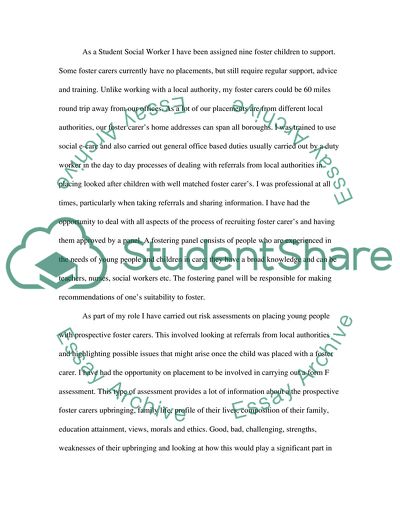 Extract of sample "Working with people and organisations"

Download file to see previous pages Furthermore preventative strategies and dilemmas were encountered.
When considering student social work one of the overarching aspects is the consideration of the welfare of the individuals involved. Indeed, Ollsen (2008) has indicated the tenuous nature of such circumstances on the children involved, “Unaccompanied minors often face severe trauma during their preflight lives as well as during the course of their migration. These traumatic experi- ences can have negative psychosocial impacts on the minors” In many instances one understands the cases and the level of support that they require, but still rely heavily on supervision for the best outcome. I have relied on supervision and have found it extremely necessary as working so closely with your cases means one must maintain an appropriate professional boundary. I have found that foster children and their birth families often in conversation slip something to you, hoping that it will not be reported. I am constantly aware of safeguarding and always advise them it must be noted. That information could be apparent later on and could put someone’s life at risk or cause personal danger.
As a Student Social Worker I have been assigned nine foster children to support. Some foster carers currently have no placements, but still require regular support, advice and training. Unlike working with a local authority, my foster carers could be 60 miles round trip away from our offices. As a lot of our placements are from different local authorities, our foster carer’s home addresses can span all boroughs. I was trained to use social e-care and also carried out general office based duties usually carried out by a duty worker in the day to day processes of dealing with referrals from local authorities in placing looked after children with well matched foster carer’s. I was professional at all times, particularly when taking referrals ...Download file to see next pagesRead More
Share:
Tags
Cite this document
(“Working with people and organisations Essay Example | Topics and Well Written Essays - 1000 words”, n.d.)
Working with people and organisations Essay Example | Topics and Well Written Essays - 1000 words. Retrieved from https://studentshare.org/miscellaneous/1416349-working-with-people-and-organisations

CHECK THESE SAMPLES OF Working with people and organisations

... solving and productivity.” (POLLITT, David, 2006) In a varied work team, managers are obligated to be acquainted with and deal with the resemblances and disparities that subsist amongst the people in the business. Worker’s notion of tasks, hope of rewards from the company and preparation as compared to others are all influenced by diversity. (GOLEMBIEWSKI, Robert T., 1995)It is necessary for the managers to comprehend the ways in which societal surroundings impinge on worker’s viewpoint regarding their duties and there ought to be a smooth flow of communication to develop self-assurance and sense of worth in associates of varied work groups. This paper hereby highlights the significance of diversified workforce for senior management...
6 Pages(1500 words)Case Study

The ways in which the treatment of young offenders is differentiated from that of adult offenders are also presented using appropriate literature; particular reference is made to the role of Young Offender Institutions (YOI). It is proved that the current criminal justice for young offenders in the UK is not effective, despite the measures taken by the government for securing the rehabilitation of these individuals. On the other hand, the full alignment of the treatment of young offenders with that of the adult offenders, as this practice is in progress in the UK, will not resolve the problems related to the rehabilitation of young offenders. The alteration of the rules of the existing criminal justice system without eliminating t...
7 Pages(1750 words)Coursework
sponsored ads
Save Your Time for More Important Things
Let us write or edit the essay on your topic "Working with people and organisations" with a personal 20% discount.
GRAB THE BEST PAPER

Let us find you another Essay on topic Working with people and organisations for FREE!