Comments (0)
Add to wishlistDelete from wishlist
Cite this document
Summary
The other reason is to recognize the application and disadvantages of the two techniques for observing bacteria. The experiment was specifically performed…
Download full paperFile format: .doc, available for editing
HIDE THIS PAPERGRAB THE BEST PAPER92.8% of users find it useful 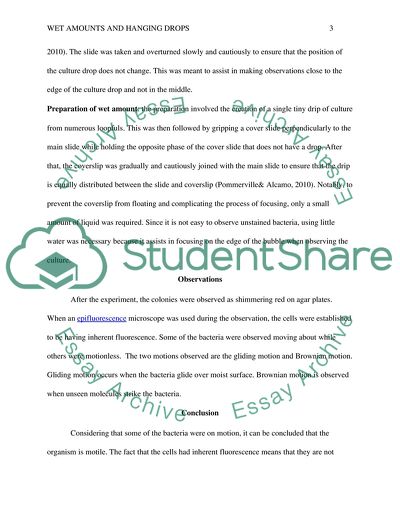 Wet amounts and Hanging Drops Purpose of the experiment The main objective of the test is to perform a microscopic analysis using wet amounts technique and hanging drops technique. The other reason is to recognize the application and disadvantages of the two techniques for observing bacteria. The experiment was specifically performed to recognize the existing dissimilarities between motion and true motility.
Method
The two methods that can be effectively used to detect active cells in a liquid include wet amount method and the hanging drop method. In the hanging drop method, a little drip of liquid is suspended from the bottom of a coverslip, over a thin depression in the distinct slide. On the other hand, wet amount method comprises of a very tiny film of liquid sandwiched between a microscopic and a cover slip respectively (Pommerville& Alcamo, 2010). In the two cases, temperature generated from the lamp and concentrated on the slide by the condenser will start to destroy the bacteria within the shortest time possible. Notably, the light should not be on if there is nobody observing the slides. If the cells are not available shortly; a new slide should be made in order to measure motility precisely.
Procedure
Preparation of hanging drop: to perform this experiment, a small amount of Vaseline was placed at both ends of the cover slip using a small stick. A tiny wax pencil spot was also placed close to one corner to assist in focusing. A little drip of culture was then placed in the middle of the cover slip. For the Vaseline to be in touch with the slide and the depression to be above the culture drop, the depression slide was upturned over the cover slip (Pommerville& Alcamo, 2010). The slide was taken and overturned slowly and cautiously to ensure that the position of the culture drop does not change. This was meant to assist in making observations close to the edge of the culture drop and not in the middle.
Preparation of wet amount: the preparation involved the creation of a single tiny drip of culture from numerous loopfuls. This was then followed by gripping a cover slide perpendicularly to the main slide while holding the opposite phase of the cover slide that does not have a drop. After that, the coverslip was gradually and cautiously joined with the main slide to ensure that the drip is equally distributed between the slide and coverslip (Pommerville& Alcamo, 2010). Notably, to prevent the coverslip from floating and complicating the process of focusing, only a small amount of liquid was required. Since it is not easy to observe unstained bacteria, using little water was necessary because it assists in focusing on the edge of the bubble when observing the culture.
Observations
After the experiment, the colonies were observed as shimmering red on agar plates. When an epifluorescence microscope was used during the observation, the cells were established to be having inherent fluorescence. Some of the bacteria were observed moving about while others were motionless. The two motions observed are the gliding motion and Brownian motion. Gliding motion occurs when the bacteria glide over moist surface. Brownian motion is observed when unseen molecules strike the bacteria.
Conclusion
Considering that some of the bacteria were on motion, it can be concluded that the organism is motile. The fact that the cells had inherent fluorescence means that they are not stained. The use of epifluorescence made the visualization of live bacteria less complex. Arguably, the use of this compound provided more information for the analysis.
Reference
Pommerville, J. C., & Alcamo, I. Edward. (2010). Alcamos laboratory fundamentals of microbiology. Sudbury, Mass: Jones and Bartlett Learning. Read More
Share:
Tags
Cite this document
(“Wet amounts and Hanging Drops Lab Report Example | Topics and Well Written Essays - 500 words”, n.d.)
Retrieved from https://studentshare.org/medical-science/1684766-wet-amounts-and-hanging-drops

CHECK THESE SAMPLES OF Wet amounts and Hanging Drops

...?WET LAB Part The discovery and isolation of stem cells proved to be a in the history of molecular biology, and the medical sciences that they inform. In addition to the obvious advantages of providing a clear model for embryonic development, the discovery of stem cells is also a crucial milestone for genetic manipulation. When embryonic mouse stem cells were isolated more than 25 years ago, the significance of the discovery was soon realized. (Keller, 2005) there are many researchers and hold out hope for cellular replacement therapy arising from stem cell research. Specifically, embryonic stem cells, also known as ES - pluripotent cells are of great concern. They exhibit the potential to differentiate into a variety of final tissue types...
5 Pages(1250 words)Essay

...﻿ What makes Orwell’s essay A Hanging so powerful? 1. Introduction Orwell’s essay A Hanging is a story that projects a scene from a jail where an individual is about to be hanged. This story is a gradual progression of the criminal and his fellows along with the warders and superintendent to the gallows where an individual’s life would be put to an end. However during this progression the readers observe a variety of play of emotions as well as get an insight of the actions that lead to the ultimate end of an individual and the manner which a culprit is punished. Orwell through this story makes an attempt to bring in light the fact that even the criminals and the people who punish such individuals...
16 Pages(4000 words)Assignment

Wet/Dry: A Status of the United States Alcohol Sales

...?Wet/Dry: A Status of the United s Alcohol Sales Introduction Traditionally, the United s has implemented a total prohibition with regard to buying and selling of alcoholic beverages; however, the government perception about the prohibition was changed during the beginning of the 20th century. Today, the alcohol industry in the U.S. is treated in different manners wherein some communities are conservative while some are against the prohibition. The conservative community does not want to legalize the selling of alcoholic drinks in the market because it could cause social and economic problems brought by unpleasant behaviors (Dull & Giacopassi, 1988). Also, they argued that this is not the only solution left to improve the economic status...
8 Pages(2000 words)Research Paper

The Hanging Gardens of Bablyon

... water. There are some ancient texts, which state that some of these stone slabs may have been over 300 feet wide and as much as eighty feet tall. If this is true, then the effort that was used to move them must have been indeed extraordinary. It would have required the use of a lot of both physical and mechanical labor in order to accomplish their movement and perfect placement within the massive structure. The amount of labor employed in the construction of the Hanging Gardens must have been staggering, especially when one considers the fact that some of the material used, such as the stone slabs, was quite massive. Furthermore, the walls of the Garden are said to have been quite high, in fact, they were even higher than the city walls...
8 Pages(2000 words)Research Paper

... of “Hanging Fire” It is perhaps only in art that one finds a cheerful coexistence of aesthetics and politics. In this light, this essay will attempt to read Audre Lorde’s poem “Hanging Fire.” The analysis will look at both formal and thematic aspects of the poem and understand them in the context of poet’s own times, social and cultural location and views projected in her art. The first feature that one notices of the poem’s rhyme scheme is the fact that it is written in a free verse. This allows the narrator, a young girl, to express herself in a pointed, free flowing manner. Furthermore, the rhyme scheme also imparts a conversational quality to the poem. Thus, the poet-narrator’s art and by extension her readers become the confidants...
3 Pages(750 words)Essay

... Verizon Drops McCann for McGarry Bank of America (BofA), recently made changes in its global advertising and marketing agency. Following a review on advertisement agencies, the bank settled on WPP and dropped BBDO, which was responsible for marketing and advertising BofA worldwide. The need to make this change was a result of the institution’s resolve to restore a positive image to its customers and other people (Elliott). As earlier mentioned, Bank of America had carried out a review on the company’s advertisement agencies that necessitated the consideration of its advertisement account. The bank carried the review in the wake of a financial crisis and recession that occasioned a rough time for recovery. In addition, the bank had...
2 Pages(500 words)Research Paper

... the class time. If I find myself doing the same, I will take a punishment of not listening to music in the evening and utilize the time to skim on the topics to be taught latter. Apart from making myself conversant with the topics to be taught, I will also start making short notes in class as the instructor continues to expound points in the relevant topic. On the normal days, I depend on the lecture notes given out by the instructor after the lesson, which at times are difficult to understand due to large amounts of information contained in them. Lastly I will increase my daily study time from one hour to three hours in a day with two hours in the evening from 7pm to 9pm and one hour in the morning from 6am to 7am. This will enable me...
2 Pages(500 words)Essay

... due to low problem solving abilities. Research findings conducted by psychologists using different theories of human development have also shown that playing violent games as has the potential to train children on complex tactics to become aggressive. Playing and wining video games also create the urge within children to involve in physical and practical exercising of their skills (Cavanaugh & Kail, 2013). To satisfy such urges, children have to involve their colleagues or any person to violence. A good example clarifying the effects of television and media on social behaviors of children occurred in 2006 immediately after hanging of Iraqi’s former President Saddam Hussein. As recorded by ABC News Medical Unit (2007), a nine years old...
1 Pages(250 words)Essay

Shooting an Elephant and A Hanging by George Orwell

...﻿Compare and Contrast "Shooting an Elephant" And "A Hanging". Abstract George Orwell played as a key character in the story but he was the main narrator and also there were six prison wardens as well as their senior; a superintendent. In the story; "A Hanging" the setting was mainly in a prison based jail while on the other hand the "Shooting an Elephant was in a Moulmein, in lower Burma where an Elephant went 'mute'.The use of colors in the two stories was mainly brown and yellow.There is also another similarity in side of character development and opening lines. In the both stories, there are two main outstanding animals involved; an elephant in the “Shooting an Elephant" and a dog in the “A Hanging". The elephant was angry, laborious...
6 Pages(1500 words)Literature review
sponsored ads
Save Your Time for More Important Things
Let us write or edit the lab report on your topic "Wet amounts and Hanging Drops" with a personal 20% discount.
GRAB THE BEST PAPER

Let us find you another Lab Report on topic Wet amounts and Hanging Drops for FREE!