Comments (0)
Add to wishlist Delete from wishlist
Cite this document
Summary
The article has described patients with the Intestinal Pseudo-Obstruction, a condition of intestinal blockage (The New York Times, 2012). It can also be known as the chronic intestinal pseudo-obstruction. Patients suffer from constipation, bloating, nausea and abdominal pain…
Download full paper File format: .doc, available for editing
HIDE THIS PAPERGRAB THE BEST PAPER99% of users find it useful 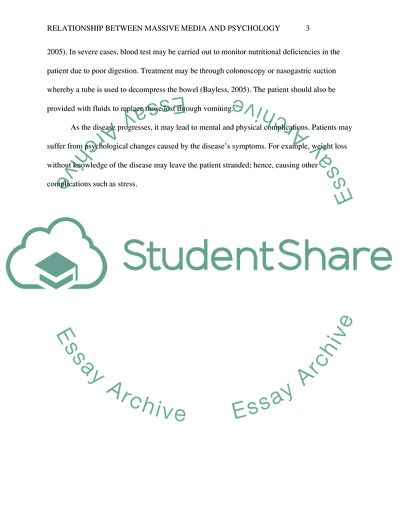 ﻿Relationship between Massive Media and Psychology

Relationship between Massive Media and Psychology
Observation 1
Date: 9/15/2011
Location: The New York Times (Intestinal Pseudo-Obstruction)
Case Description:
The article has described patients with the Intestinal Pseudo-Obstruction, a condition of intestinal blockage (The New York Times, 2012). It can also be known as the chronic intestinal pseudo-obstruction. Patients suffer from constipation, bloating, nausea and abdominal pain. The patients suffer from decreased abilities in the digestion process. Food cannot be digested normally due to the blockages in the intestine. However, there is no physical blockage in the patient’s body. The large and small intestines lose their capability to push food and stool through the gastrointestinal tract. Patients suffer from other symptoms such as constipation in the end.
Psychological Implication
The case study is an example of a condition that may lead to various brain and neural conditions such as cerebral palsy (Bayless, 2005). They are caused by chronic symptoms that occur over time. There is no specific cause of Intestinal Pseudo-Obstruction, and patients may suffer from the disease at any age. Other risk factors include chronic lung, heart and kidney diseases. They may be caused by the lack of proper food digestion and prolonged constipation periods. Weight loss may occur in some patients since the consumed food is not being digested. Lack of physical blockage makes it hard for the patient notice the first stages of the condition. Scans and x-ray can be used for the exams and tests in patients. Abdominal x-ray, anal manometry, colonoscopy and barium-swallow may be used to diagnose the condition (Bayless, 2005). In severe cases, blood test may be carried out to monitor nutritional deficiencies in the patient due to poor digestion. Treatment may be through colonoscopy or nasogastric suction whereby a tube is used to decompress the bowel (Bayless, 2005). The patient should also be provided with fluids to replace those lost through vomiting.
As the disease progresses, it may lead to mental and physical complications. Patients may suffer from psychological changes caused by the disease’s symptoms. For example, weight loss without knowledge of the disease may leave the patient stranded; hence, causing other complications such as stress.
References
Bayless, T. (2005). Advanced therapy in gastroenterology and liver disease (5th ed.). London: B.C. Decker.
The New York Times. (2012, August 22). Retrieved February 24, 2015, from http://www.nytimes.com/health/guides/disease/primary-intestinal-pseudo-obstruction/overview.html Read More
Share:
Tags
Cite this document
(Primary Intestinal Pseudo-Obstruction in The New York Times Article, n.d.)
Primary Intestinal Pseudo-Obstruction in The New York Times Article. Retrieved from https://studentshare.org/medical-science/1679760-relation-ship-between-massive-media-and-psychology

...?Audience: New York Times Readers Let twitter bring peace on earth. In the park, or the mall, or the subway, this festive season will be alive with the sound of i-phones ringing and young people tweeting to their friends. The big issue for many parents and grandparents will be: how far should we go along with this post-modern trend for fancy gadgets ? Do we really want our kids to be laying out their lives for all to see on facebook, or tweeting their innermost thoughts to the world? Despite the dangers, our answer to these questions should be a resounding “yes.” Some would say a policy of benign indifference is best. Kids will always choose what is trendy and it is cruel to deny them the chance to be cool in school. Facebook is a fad...
3 Pages (750 words) Essay

In the assessment, the divergence in the articles may be less accounted for by cultural differences, and more in line with differences in a vantage point with respect to the issue at bar. Assignment No. 3 Analyzing Reports on a Current Business Related Event: Germany’s Refusal to Share the EU Debt Burden Introduction The tenets of journalism require objective reporting, which is defined as: balance and even-handedness in presenting sides of an issue; accuracy and realism; separating facts from opinion; minimizing the influence of writer’s own attitude or opinion; and avoiding slant, rancor or devious purposes (Boyer, 1981, cited in Harcup, 2009: 83). Evidently, the purpose of news reporting is to filter out the reporte...
4 Pages (1000 words) Research Paper

...?New York Times by Elisabeth Rosenthal THESIS MENT This paper intends to summarize certain articles that provide a brief idea about the rising healthcare costs in the United States. Moreover, the conception of “evidence based medicine” and the reasons for which it is criticized at certain times will also be discussed. SUMMARY OF THE ARTICLE TITLED: “THE 2.7 TRILLION MEDICAL BILL” This article primarily highlights the critical concern of raising medical expenses in the overall context of the United States. It also demonstrates the most costly bill of the year that amounted to US$6,385. For providing extended features of treatment, medical care professionals are responsible for charging certain amounts to the patients in relation...
4 Pages (1000 words) Research Paper

...New York Times Article The essay aims to address and respond to the following questions after reading thearticle entitled “If You Want to Observe ’Em, Join ’Em” written by William Grimes and published in The New York Times on January 16, 2008: 1) Why do you think Sudhir Venkatech choose to use participant observation to do this research? What advantages and disadvantages can you see in his choice? 2) What special dangers did this research pose to the researcher? 3) From this article, did you learn anything about gang life that surprised you? If so what? Paper must answer these three questions and have two Scholarly references, must have good thesis. New York Times Article: “If You Want to Observe ’Em, Join ’Em” Grimes (2008) proffered...
2 Pages (500 words) Research Paper

New Articles from the New York Times about Mammograms

New articles from the New York times about Mammograms are important in the addressing of various speculations related to radiation and cancer. In addition, the article helps to clarify facts that exist between the value of the screening test for women suspected to have cancer and those with cancer (Dronkers, 2011). The news report also tries to enlighten the effectiveness of Mammograms in the determination of the existence of cancer at the early periods' stages especially in the development of this particular malady (Botha, 2014). The news article is significant due to its combination of various research findings in its quest to conclude the average effectiveness of Mammograms. Mammograms are heavily relied on for cancer ther...
4 Pages (1000 words) Research Paper

...﻿New York Times Newspaper Paywall Situation overview New York Times is an American newspaper founded in 1851 and has attained high success since it has won 112 ‘pulitzer prizes’ due to its high readership and informative content. The company implemented the paywall system that was aimed in increasing revenues through online subscription. Paywall is designed to streamline online business and monetize digital content through creation of digital barriers for the premium content that require readers to make subscriptions. The system creates additional revenue streams for newspaper companies and enhances the brand loyalty. The design of paywall New York Times used a device-specific and metered system that allowed the readers to access...
2 Pages (500 words) Case Study

New york times from from october 2014

Incarceration and the Reintegration of Ex-offenders Why has the US prison population increased steeply over the past 3 decades?
First, pressure against crime during the 1980s and 1990s turned the issue into a bipartisan, political matter. Today, this demographic increase is a product of a bipartisan assessment of the criminal justice system (Williams and Vega 2014). Second, the allocation of funds for incarceration efforts rose steeply over the last thirty years to the extent that it surpassed those of other state functions. Third, the marginalization of the employment sector towards depriving ex-offenders of employment opportunities compelled them to return to crime and eventually maintain the already soaring prison population...
1 Pages (250 words) Assignment

...﻿False Information In The New York Times Example: The New York Times published false information on the collapse of the Wall Street Collapse 2008. Inthis report, themedia house published a narrative that the Glass-Steagall Act repeal in 1999 had nothing to with the major collapse of Wall Street in 2008. Reason why it is deceitful In earlier news publication, The New Times had already admitted in one of its editorial pages that it was wrong for the economic advisors to repeal the Glass-Steagall suggesting that the news power house already knew that it was the repeal of the act that caused or led to the collapse of Wall Street in 2008. In this case, the New York Times implicated itself by publishing a new story on what actually transpired...
1 Pages (250 words) Assignment
sponsored ads
Save Your Time for More Important Things
Let us write or edit the article on your topic "Primary Intestinal Pseudo-Obstruction in The New York Times" with a personal 20% discount.
GRAB THE BEST PAPER

Let us find you another Article on topic Primary Intestinal Pseudo-Obstruction in The New York Times for FREE!