Comments (0)
Add to wishlistDelete from wishlist
Cite this document
Summary
The essay aims to address a two-fold objective to wit: to study further Alzheimer’s disease; to explain the concept of Alzheimer’s disease. Scientists are also looking for the creation of a vaccine that may prevent an occurrence of Alzheimer’s disease. …
Download full paperFile format: .doc, available for editing
HIDE THIS PAPERGRAB THE BEST PAPER93.8% of users find it useful 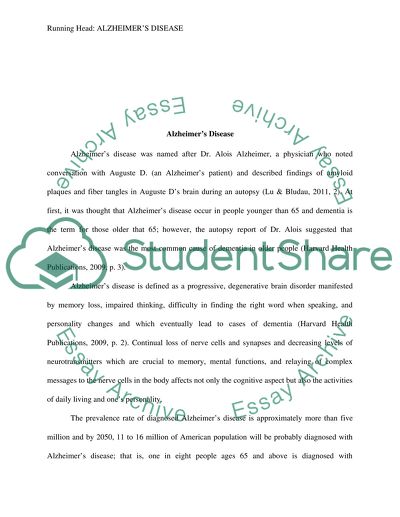 CHECK THESE SAMPLES OF Alzheimers Disease

Disease and Genetic Disorder for the Human Body Systems

...Diseases Cardiovascular diseases involve the heart and the blood vessels. Myocardial infarction Myocardial infarction generally known as Heart Attack is a cardiovascular disease occurs when the coronary arteries, which supply blood to the heart, are blocked. This is the number one cause of death in developed countries. The blockage short supplies blood to the heart causing the death of the part of the heart tissue and can be fatal if not treated immediately. Major reasons for the blockage are blood clots and lipid deposits. The most common symptom are chest pain and tightness often radiates to left arm. Aspirin and heparin are given immediately as anticoagulants to inhibit further blood clots. Electrocardiography and angiography...
6 Pages(1500 words)Essay

The prevalence of increased antibiotic resistance of bacterial agents of disease is a serious clinical concern because it limits and reduces the efficiency of the treatment options that are available. The mechanism of the development of antibiotic resistance has been attributed to bacteria’s capacity to mutate. The mutation alters existing resistance determinants to antimicrobial agents and produces different drug targets that have decreased antibiotic affinity. Thus, mutators that have high mutation frequencies could have important roles in developing antibiotic resistance (Chopra, O’Neill, & Miller, 2003). It is believed that bacteria mutate as part of its endogenous survival mechanism. In E. coli, defects in gen...
7 Pages(1750 words)Research Proposal

Heart Disease as One of the Leading Causes of Mortality

...Critically analyse whether there is any short term and/or long term benefit in running an exercise referral scheme to modify risk factors for heart disease Introduction: Heart disease is one of the leading causes of morbidity and mortality among the developed countries. Atheromatous disease of coronary arteries is the most important single cause of death in the western world and Atheroma is the commonest cause of angina pectoris leading to myocardial infarction and its complications. The risk factors in aetiology of heart disease are complex and much of its understanding is based on epidemiological evidence. It has been seen that geographical difference between countries in the manifestation of all aspects of heart disease is evident...
9 Pages(2250 words)Essay

Something Learned Within the Last Year That I Now Know A Lot About: Alzheimer's Disease

...Alzheimers Disease Table of Contents I. Research 3 A. Background 3 B. Symptoms and Signs 4 C. Treatment Options, New Research 5 II. Importance, How ICame to Learn About the Disease 7 III. Reflection 10 References 13 I. Research A. Background Alzheimers Disease is a brain degeneration condition, where the progression is gradual but whose symptoms become evident on the sixth decade in the life of a person, and which is characterized by the slow erosion of the thinking capacities and memory capacities of the person, to the point of total loss of ability to perform the most fundamental bodily tasks. In the elderly, the most prevalent form of dementia is Alzheimers. As a generalization of the condition of Alzheimers, the umbrella...
10 Pages(2500 words)Term Paper

The Effect of Diphtheria Disease on Mice

...EFFECTS OF DIPHTHERIA DISEASE (RESEARCH PROPOSAL) This research proposal advocates for a comprehensive evaluation of the effects of the Diphtheria disease on mice, and the variations of the bacterial aspects when compared to human effects. The Diphtheria disease is a leading cause of death in most countries and has many complications such as the growth of thick membranes on the respiratory tract causing difficulties in swallowing and breathing (WHO 2010). Through the evaluation the disease’s effects on mice, there are possibilities of finding weak points of the bacteria and absolute ways of preventing the disease through a better vaccination program or a way to counter it. The core method to use for the extraction of information is through...
7 Pages(1750 words)Research Proposal

Let us find you another Essay on topic Alzheimers Disease for FREE!