Comments (0)
Add to wishlistDelete from wishlist
Cite this document
Summary
The paper "The Main Challenges in Formulating the Industrial Policy of the European Union" discusses that Developing or formulating industrial policy for the European Union should be based on neutral grounds in terms of fairly allocating the available EU government funds. …
Download full paperFile format: .doc, available for editing
HIDE THIS PAPERGRAB THE BEST PAPER96.9% of users find it useful 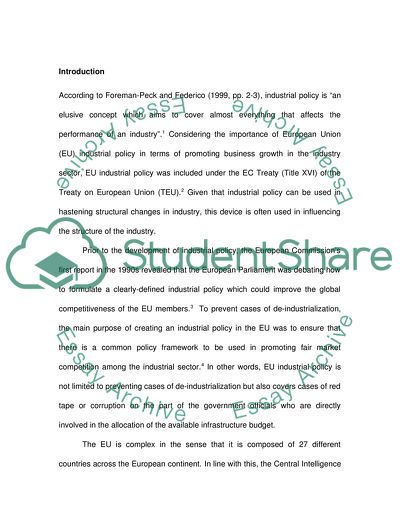 Download file to see previous pages EU industrial policy was included under the EC Treaty (Title XVI) of the Treaty on European Union (TEU).2 Given that industrial policy can be used in hastening structural changes in the industry, this device is often used in influencing the structure of the industry.
Prior to the development of industrial policy, the European Commission’s first report in the 1990s revealed that the European Parliament was debating how to formulate a clearly-defined industrial policy which could improve the global competitiveness of the EU members.3 To prevent cases of de-industrialization, the main purpose of creating an industrial policy in the EU was to ensure that there is a common policy framework to be used in promoting fair market competition among the industrial sector.4 In other words, EU industrial policy is not limited to preventing cases of de-industrialization but also covers cases of red tape or corruption on the part of the government officials who are directly involved in the allocation of the available infrastructure budget.
The EU is complex in the sense that it is composed of 27 different countries across the European continent. In line with this, the Central Intelligence Agency (2011) has identified the 27 members of the European Union as follows: Austria, Belgium, Bulgaria, Cyprus, Czech Republic, Denmark, Estonia, Finland, France, Germany, Greece, Hungary, Ireland, Italy, Latvia, Lithuania, Luxembourg, Malta, Netherlands, Poland, Portugal, Romania, Slovakia, Slovenia, Spain, Sweden, and the UK.
Free market competition among the EU member states and the free movement of goods and services are among the few goals associated with the development of industrial policy in the European Union.5 Considering a large number of EU member states, the challenge behind the formulation of industrial policy in the EU includes the limitation of the available industrial policy in preventing instances of market distortion and market discrimination among the EU countries. ...Download file to see next pagesRead More
Share:
Tags
Cite this document
(The Main Challenges in Formulating the Industrial Policy of the Research Paper - 1, n.d.)
The Main Challenges in Formulating the Industrial Policy of the Research Paper - 1. Retrieved from https://studentshare.org/marketing/1751971-market-regulation-in-the-eu

The Main Objectives of the European Union

... Bank (EIB) is the European Union’s Bank owned by member states and works closely with EU financial institutions to implement EU policy. EIB is the largest borrower and lender by volume operating across different countries; the bank provides expertise to facilitate sound investment projects (Europa, 2013). Its roles are threefold and include lending, blending and advising. It helps to unlock financing challenges as well as project management expertise within the EU where 90% of its activities are concentrated. European Council The European Council provides a platform for European Leaders to give political direction and priorities affecting the EU. Comprises of EU leaders and meets four times a year to discuss EU’s political priorities...
10 Pages(2500 words)Term Paper

... have contributed to development of international among the member states. This paper will also outline various aspects that shape business among EU member states such as the law as well as other constraints that may exist. Having realised the destructive effects and killings caused by WW2, Europe is split into East and West. “West European nations create the Council of Europe in 1949. It is a first step towards cooperation between them, but six countries want to go further” European Union, 2013). Essentially, the main reason of cooperation among the European countries was to promote peace and economic activity among member states. The member states agreed that they will run their heavy industries involving coal and iron under common...
10 Pages(2500 words)Term Paper

... i. Most of the laws governing ECJ commercial circles whether directly or indirectly, are grounded on the European Union Laws ii. The framework which governs private businesses is widely derived from the rules that were established in 1957: that is, The Rome Treaty iii. Most of the sections of the regimes ruling and providing guidance and direction are either prescribed to European Union Regulations or largely affected by the “sectoral” agreements reached upon by the states in agreement. The reference of the aforementioned views are made to the C-213/89 Factortame (No1) [1990] ECR I-2433 Case 11/70: a case that involve the controversy in the fishing policy that were change in British. The fishing policy which started iin early 1970s...
4 Pages(1000 words)Essay

...Introduction The monetary and economic revolution embodied in the European Union (EU) entails far more than the elimination of 25 national currencies and the distribution of colourful new banknotes and coins across Europe. Chabot stated that this revolution involves the solidification of a European market of goods and services, major structural changes in countries plagued by fiscal negligence, and the reorganization of monetary policy in some of the world's most advanced industrialized economies (3). Chabot continues that though at a first glance it may seem that a new trans-European currency [and economic policies] would hold little significance outside of banking and tourist circles, the European Union [through its euro currency] has...
13 Pages(3250 words)Essay

... is missing the crux of the ageing and declining population. - EU would continue to push for maximizing "incomes" and "GDPs" as well as other economic indicators in order to polish its social policy. Section 1 Introduction It is always the aim of every governing body, local and international, to provide the best possible services and condition of living among its citizens. For countries within the European Union, the merging of policies, from economic, political, and social aspects proved a challenge as various cultures, environments, backgrounds, history and peoples all pose possible problems among policy makers. In addition, it had been obvious that economic objectives come first prior to welfare issues, although much effort has...
14 Pages(3500 words)Essay

This paper illustrates that the European “dollar hegemony, thawed out frozen masses of immobilized capital, increased the volume and value of international trade, and opened and expanded markets on a vast scale. It created pressures that, if not irresistible, at least required better and more tenacious defenses, opened horizons beyond anything previously imaginable, yet also posed new regulatory challenges”. There are many advantages and disadvantages in implementing a change of work, place, policy, statute, condition or environment. There are successes, failures, and depression brought about by the fluctuations in a currency's market price. The f...

...EUROPEAN UNION The negative outcomes of its various policies and the series of failed attempts of its ambitious economic reform policies, requires the Union to promptly overhaul its infrastructure and revamp its management policies. Some of the reforms undertaken by the European Union such as the Common Agricultural Policy, Competition Policy, Science and Technology Policy, Regional Policy and Social Policy and their resultant outcomes are described briefly in the following sections. The CAP of the European Union has undergone several significant reforms since the beginning of the year 1990 which commenced with the seeking increased reduction on the market price support, and a support for direct payments (1992, and 1999 reforms...
2 Pages(500 words)Essay

European Union With globalization process and the economic liberalization, it has become paramount for countries to engage each other in trade partnership and international exchanges programs. The formation of trade unions and other trading blocs has been fueled by the increase in the need for economic integration and economic unions. Globally, countries and continents are engaging in bilateral or multi-lateral trade partnerships for the benefit of its trading partners. The need for the formation of economic and trade unions is prompted by the fact that these countries have different forms of economic and resource endowments thereby creating relative and comparative trade advantages. In this respects, each countries specializes in...
2 Pages(500 words)Essay

... are weak and cannot protect their young industry; cannot compete with the efficiencies of developed ones; and in such a case, the economy of the developing country remains low. The developing country must look at the experience of the “Asian Tigers” in the area of domestic and export trade. End. W.c. 2025 References Aheam, Raymond J.(09 June, 2003). European Union Trade Relations: Issues and Policy Challenges. Foreign Affairs, Defense and Trade Division, CRS Issue Brief for Congress U.S. digital.library.unt.edu/govdocs/crs/permalink/meta-crs-2004:1 - 160k Balakrishnan, Angela. The Doha Round of WTO Talks) guardian.co.uk. 23 April 2009 http://www.guardian.co.uk/business/2008/jul/21/globaleconomy.wto Devanny Joe. (21 July 2008)

Let us find you another Research Paper on topic The Main Challenges in Formulating the Industrial Policy of the European Union for FREE!