Comments (0)
Add to wishlistDelete from wishlist
Cite this document
Summary
Upon arrival at the sales store, he made it to clear to Chris (the seller) that he was in a hurry and did not want to waste time. Josh then picked up two different pairs of shoes: a black and a…
Download full paperFile format: .doc, available for editing
HIDE THIS PAPERGRAB THE BEST PAPER97.3% of users find it useful 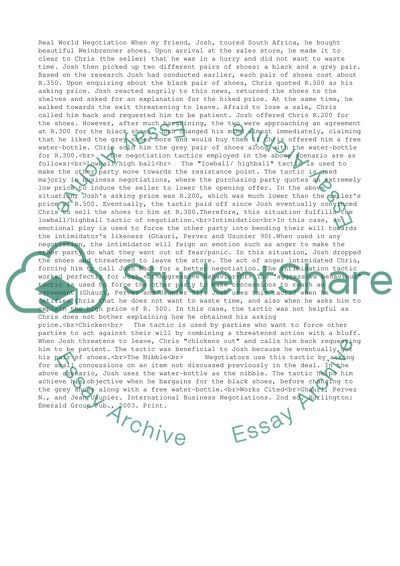 Real World Negotiation When my friend, Josh, toured South Africa, he bought beautiful Weinbrenner shoes. Upon arrival at the sales store, he made it to clear to Chris (the seller) that he was in a hurry and did not want to waste time. Josh then picked up two different pairs of shoes: a black and a grey pair. Based on the research Josh had conducted earlier, each pair of shoes cost about R.350. Upon enquiring about the black pair of shoes, Chris quoted R.500 as his asking price. Josh reacted angrily to this news, returned the shoes to the shelves and asked for an explanation for the hiked price. At the same time, he walked towards the exit threatening to leave. Afraid to lose a sale, Chris called him back and requested him to be patient. Josh offered Chris R.200 for the shoes. However, after much bargaining, the two were approaching an agreement at R.300 for the black shoes. Josh changed his mind almost immediately, claiming that he liked the grey shoes more and would buy them if Chris offered him a free water-bottle. Chris sold him the grey pair of shoes along with the water-bottle for R.300.
The negotiation tactics employed in the above scenario are as follows:
Lowball/high ball
The “lowball/ highball” tactic is used to make the other party move towards the resistance point. The tactic is used majorly in business negotiations, where the purchasing party quotes an extremely low price to induce the seller to lower the opening offer. In the above situation, Josh’s asking price was R.200, which was much lower than the seller’s price of R.500. Eventually, the tactic paid off since Josh eventually convinced Chris to sell the shoes to him at R.300.Therefore, this situation fulfills the lowball/highball tactic of negotiation.
Intimidation
In this case, an emotional ploy is used to force the other party into bending their will towards the intimidator’s likeness (Ghauri, Pervez and Usunier 90).When used in any negotiation, the intimidator will feign an emotion such as anger to make the other party do what they want out of fear/panic. In this situation, Josh dropped the shoes and threatened to leave the store. The act of anger intimidated Chris, forcing him to call Josh back for a better negotiation. The intimidation tactic worked perfectly for Josh.
Aggressive Behavior
The “aggressive behaviour” tactic is used to force the other party to make concessions to reach an agreement (Ghauri, Pervez and Usunier 91). Josh uses this tactic when he notifies Chris that he does not want to waste time, and also when he asks him to explain the high price of R. 500. In this case, the tactic was not helpful as Chris does not bother explaining how he obtained his asking price.
Chicken
The tactic is used by parties who want to force other parties to act against their will by combining a threatened action with a bluff. When Josh threatens to leave, Chris “chickens out” and calls him back requesting him to be patient. The tactic was beneficial to Josh because he eventually got his pair of shoes.
The Nibble
Negotiators use this tactic by asking for small concessions on an item not discussed previously in the deal. In the above scenario, Josh uses the water-bottle as the nibble. The tactic helps him achieve his objective when he bargains for the black shoes, before changing to the grey shoes along with a free water-bottle.
Works Cited
Ghauri, Pervez N., and Jean Usunier. International Business Negotiations. 2nd ed. Burlington: Emerald Group Pub., 2003. Print. Read More
Share:
Tags
Cite this document
(“Real world negotiation Assignment Example | Topics and Well Written Essays - 500 words”, n.d.)
Real world negotiation Assignment Example | Topics and Well Written Essays - 500 words. Retrieved from https://studentshare.org/management/1662174-real-world-negotiation

...﻿The Real World As a student who is going to graduate this year, I think I have learnt so many skills that can get me into the “real world “and start my new off-campus life. The real world is deeply attracted to me and I think that there are great opportunities in the real world waiting for me. When students are off campus and get into the “real world” they face variety of challenges which they may not easily overcome. For some students, life after college might be the first time they are independent and this applies to me too. I am planning to graduate this summer, at...
3 Pages(750 words)Essay

...? Marketing in Real World Marketing is a push tactic that involves promoting either service or product as a way ofpromoting sales. An organization must employ best marketing strategies as a way of boosting sales of their products or services. Marketing largely depend on the scope and nature of a business and industry (Silk, 2006). Marketing is anticipated to meet customer needs and wants in order to increase demand for a particular product or service. Every company would use all their available resources to increase their customer base, advance client sentiments towards the organizations products as well as advancing the perceived worth. Marketing is all about achieving company’s objectives and becoming...
4 Pages(1000 words)Research Paper

...? Real life negotiation analysis My Situation Thinking about my future confuses me at times. I left my family and friends for pursuing my master degree. This degree means a lot to me as I want to extend my knowledge, excel my related field and establish my business based on the implementation of all the theoretical knowledge that I gained. However there were many pros and cons related to the decision I took. Before I began to study for my master program, I worked in my family company for two years. It is our family tradition that every member after graduating has to work for at least 5 years in our family company and then carry out with whatever they want. My father did not agree with my idea of leaving...
3 Pages(750 words)Assignment

...Real World Example Usually we study hypothetical examples, problems and their solution in our contents, thinking that these may not be happen in the real lives and businesses. Actually this thinking is not totally wrong because there are certain theories and models which are not applicable in the real world but still some other problems may arise. Thus the management has to handle all these problems in a way to maintain their operations and the output also. Problem solving is not an easy job. The individual who takes this responsibility of this decision making and the problem solving should take care of each and every aspect of the related people so that...
1 Pages(250 words)Essay

...Real World Radical Formulas the al affiliation If one is going to model a ship or boat, the safeness of crew must be a primary aim. One of the most impotent characteristics of boat safeness is the stability. The unique model needs unique investigation of its stability. On the other hand, it is convenient to have some general characteristic to estimate stability of the boat. It is also desirable deal with widely used variables. Thus characteristic is the capsize screening value. To understand the nature of capsize screening value one may consider the rectangle ship model (see figure below). Now, we assume that the boat deviates from the equilibrium position. The angle of deviation is . It is supposed to be small (see front view... World...
2 Pages(500 words)Assignment

...Real World Negotiation 2 Introduction Sofia and I have been friends for a long time. We are close friends, so we share secrets about our personal lives. Sofia’s boyfriend, Echo, and I are also good friends. Some years back, after dating Echo for a year, Sofia told me about a party that she had attended and apparently kissed some random guy. It remained a secret between us. Months later, I received a call from Sofia. Amid sobs, she told me of her discovery that Echo was still communicating with his ex-girlfriend. That was against Sofia’s wish and Echo understood that. She had seen Echo’s emails to her on his personal computer. The pair, Sofia and Echo, remained on silent terms for about...
2 Pages(500 words)Assignment

...Essentials of Negotiation Real Life Bargaining and Negotiation Situation Situation and Negotiation Environment The bargaining and negotiation situation that involved employees and the owner of a small business I worked for in the past. The situation occurred due to heavy workload and low wages for employees. The business was a family owned business with only five employees. It was a small hotel with a lot of customers. It had a good flow of activities and the staff was very dedicated and skilled. The quality of food was also very high, enhancing loyalty of customers. The small business made a lot of profit, considering its small size. However, employees...
11 Pages(2750 words)Research Paper

...Running Head: Real world Perspective Real world Perspective Saad Alsulaiti Melissa Martin Oct 27, Com220 CH7: Real world Perspective Generally the media portrays Arabian cultures as unrefined and impolite. While most of the media covers the bad things that happen in the Middle East, they do not target their audience to what real Middle Easterners are. What is mostly depicted is radicals and suicide bombers, which always gets attention from the media and people or how wealthy some individuals are. After seeing that people from around the globe see Arabic speaking communities in this narrow...
3 Pages(750 words)Essay
sponsored ads
Save Your Time for More Important Things
Let us write or edit the assignment on your topic "Real world negotiation" with a personal 20% discount.
GRAB THE BEST PAPER

Let us find you another Assignment on topic Real world negotiation for FREE!