Comments (0)
Add to wishlistDelete from wishlist
Cite this document
Summary
Bertsche advises that a strong rapport between the sponsor and project manager begins before a project starts.1 The sponsors for my University application project have 80% interest of ownership. The communication between the sponsors and me is usually in a written format. To…
Download full paperFile format: .doc, available for editing
HIDE THIS PAPERGRAB THE BEST PAPER95.8% of users find it useful 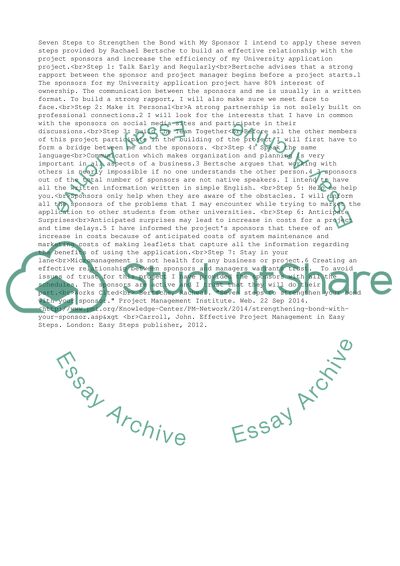 Seven Steps to Strengthen the Bond with My Sponsor I intend to apply these seven steps provided by Rachael Bertsche to build an effective relationship with the project sponsors and increase the efficiency of my University application project.
Step 1: Talk Early and Regularly
Bertsche advises that a strong rapport between the sponsor and project manager begins before a project starts.1 The sponsors for my University application project have 80% interest of ownership. The communication between the sponsors and me is usually in a written format. To build a strong rapport, I will also make sure we meet face to face.
Step 2: Make it Personal
A strong partnership is not solely built on professional connections.2 I will look for the interests that I have in common with the sponsors on social media sites and participate in their discussions.
Step 3: Build the Team Together
Before all the other members of this project participate in the building of the project I will first have to form a bridge between me and the sponsors.
Step 4: Speak the same language
Communication which makes organization and planning is very important in all aspects of a business.3 Bertsche argues that working with others is nearly impossible if no one understands the other person.4 3 sponsors out of the total number of sponsors are not native speakers. I intend to have all the written information written in simple English.
Step 5: Help me help you.
Sponsors only help when they are aware of the obstacles. I will inform all the sponsors of the problems that I may encounter while trying to market the application to other students from other universities.
Step 6: Anticipate Surprises
Anticipated surprises may lead to increase in costs for a project and time delays.5 I have informed the project’s sponsors that there of an increase in costs because of anticipated costs of system maintenance and marketing costs of making leaflets that capture all the information regarding the benefits of using the application.
Step 7: Stay in your lane
Micromanagement is not health for any business or project.6 Creating an effective relationship between sponsors and managers warrants trust. To avoid issues of trust for this project I have provided the sponsors with all the schedules. The sponsors are active and I trust that they will do their part.
Works Cited
Bertsche, Racheal. "Seven steps to strengthen your bond with your sponsor." Project Management Institute. Web. 22 Sep 2014. Read More
Share:
Tags
Cite this document
(“Assignment Essay Example | Topics and Well Written Essays - 250 words - 67”, n.d.)
Assignment Essay Example | Topics and Well Written Essays - 250 words - 67. Retrieved from https://studentshare.org/management/1657894-assignment

...the manager has to help the subordinates through his expertise. 4. In some cases, management fails to adopt the dilemma of authority being equal to responsibility. This dilemma is not followed while delegating tasks to subordinates. A subordinate may be assigned a task or responsibility but he may not have the equal authority to get the task completed. In such scenarios, the subordinate has to use tactics such as persuasion and personal power to get the job done. 5. Engineers undergo heavy training, they are taught about every technicality of the job and in vocational schools, they learn about every single details of doing a task perfectly. They do not have the skills of being flexible on work or use different techniques...
1 Pages(250 words)Assignment
sponsored ads
Save Your Time for More Important Things
Let us write or edit the essay on your topic "Assignment" with a personal 20% discount.
GRAB THE BEST PAPER

Let us find you another Essay on topic Assignment for FREE!