Comments (0)
Add to wishlistDelete from wishlist
Cite this document
Summary
This paper "Path-Goal and Situational Theories of Leadership" focuses on the theory of leadership which is highly applicable in the public health situations; through this leadership theory, the public health leader can gain an in-depth understanding of the employees.  …
Download full paperFile format: .doc, available for editing
HIDE THIS PAPERGRAB THE BEST PAPER91.6% of users find it useful 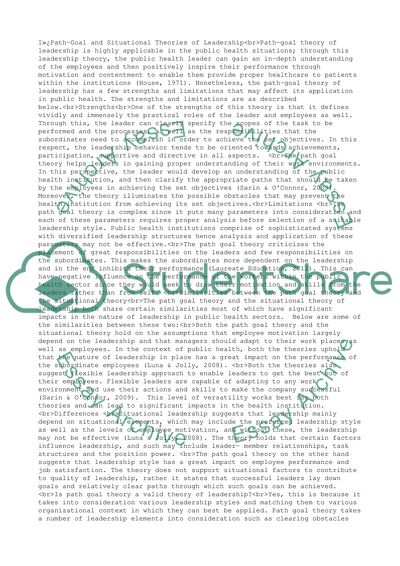 Extract of sample "Path-Goal and Situational Theories of Leadership"

﻿Path-Goal and Situational Theories of Leadership
Path-goal theory of leadership is highly applicable in the public health situations; through this leadership theory, the public health leader can gain an in-depth understanding of the employees and then positively inspire their performance through motivation and contentment to enable them provide proper healthcare to patients within the institutions (House, 1971). Nonetheless, the path-goal theory of leadership has a few strengths and limitations that may affect its application in public health. The strengths and limitations are as described below.
Strengths
One of the strengths of this theory is that it defines vividly and immensely the practical roles of the leader and employees as well. Through this, the leader can clearly specify the scopes of the task to be performed and the processes, as well as the responsibilities that the subordinates need to accomplish in order to achieve the set objectives. In this respect, the leadership behavior tends to be oriented towards achievements, participation, supportive and directive in all aspects.
The path goal theory helps leaders in gaining proper understanding of their work environments. In this perspective, the leader would develop an understanding of the public health institution, and then clarify the appropriate paths that should be taken by the employees in achieving the set objectives (Sarin & O’Connor, 2009). Moreover, the theory illuminates the possible obstacles that may prevent the health institution from achieving its set objectives.
Limitations
The path goal theory is complex since it puts many parameters into consideration and each of these parameters requires proper analysis before selection of a suitable leadership style. Public health institutions comprise of sophisticated systems with diversified leadership structures hence analysis and application of these parameters may not be effective.
The path goal theory criticizes the placement of great responsibilities on the leaders and few responsibilities on the subordinates. This makes the subordinates more dependent on the leadership and in the end inhibits their performance (Laureate Education, 2012). This can have negative influence on the performance of the workers within the public health sector since they would seek to draw their motivation and skills from the leaders rather than from self.
Similarities between the path goal theory and the situational theory
The path goal theory and the situational theory of leadership both share certain similarities most of which have significant impacts in the nature of leadership in public health sectors. Below are some of the similarities between these two:
Both the path goal theory and the situational theory hold on the assumptions that employee motivation largely depend on the leadership and that managers should adapt to their work places as well as employees. In the context of public health, both the theories uphold that the nature of leadership in place has a great impact on the performance of the subordinate employees (Luna & Jolly, 2008).
Both the theories also suggest flexible leadership approach to enable leaders to get the best out of their employees. Flexible leaders are capable of adapting to any work environment and use their actions and skills to make the company successful (Sarin & O’Connor, 2009). This level of versatility works best for both theories and can lead to significant impacts in the health institution.
Differences
Situational leadership suggests that leadership mainly depend on situational elements, which may include the preferred leadership style as well as the levels of employee motivation, and without these, the leadership may not be effective (Luna & Jolly, 2008). The theory holds that certain factors influence leadership, and such may include leader- member relationships, task structures and the position power.
The path goal theory on the other hand suggests that leadership style has a great impact on employee performance and job satisfaction. The theory does not support situational factors to contribute to quality of leadership, rather it states that successful leaders lay down goals and relatively clear paths through which such goals can be achieved.
Is path goal theory a valid theory of leadership?
Yes, this is because it takes into consideration various leadership styles and matching them to various organizational context in which they can best be applied. Path goal theory takes a number of leadership elements into consideration such as clearing obstacles and giving a clear path for achieving intended goals (Sarin & O’Connor, 2009). These leadership and factors are comprehensive hence making the path goal theory valid and viable within any organizational setting.
References
House, R. J. (1971). A Path Goal Theory of Leader Effectiveness. Administrative Science Quarterly, 1(1), 321 - 339.
Laureate Education, Inc. (Executive Producer). (2012). Leadership theory: Path-Goal theory. Baltimore, MD: Author.
Luna, B. A., & Jolly, J. (2008). An Analysis of the Nuances and Practical Applications of Situational Leadership in the Management and Administration Of International Health Care Organizations. International Journal of Business and Management, 3(5), 18 - 25.
Sarin, S., & O’Connor, G. C. (2009). First among Equals: The Effect of Team Leader Characteristics on the Internal Dynamics of Cross-Functional Product Development Teams. Team Leader Characteristics and Internal Dynamics, 26(1), 188 -205. Read More
Share:
Tags
Cite this document
(“Path-Goal and Situational Theories of Leadership Assignment”, n.d.)
Retrieved de https://studentshare.org/management/1652726-path-goal-and-situational-theories-of-leadership

“Path-Goal and Situational Theories of Leadership Assignment”, n.d. https://studentshare.org/management/1652726-path-goal-and-situational-theories-of-leadership.
Comments (0)
Click to create a comment or rate a document

CHECK THESE SAMPLES OF Path-Goal and Situational Theories of Leadership

...and comprise specific styles as well as attitudes in providing active support to the subordinates in accomplishing their respective work objectives (House, 1996). Thesis Statement This paper intends to discuss about Path-Goal theory relating to leadership style which implements by various organization in order to attain work objectives successfully. Moreover, the identification of the Path-Goal leadership style used in the situation of proving the tasks and the subordinates’ characteristics will also be discussed in the paper. Identification of the Path-Goal...
3 Pages(750 words)Assignment

... SITUATIONAL AND CONTINGENCY THEORIES Leadership of multidisciplinary or interdisciplinary team of professionals under the aspects of Management principals can be defined as the art of creating industrial relations of any kind, between people engaged in the industry, such as relation between employers and employees, relation between individuals entering into commercial contracts, relation between investors and debtors etc, in order to maintain true cooperation of all concerned along with motivating the entire deal into a positive favor. In the context of nursing both Situational and Contingency, theories are implemented. However, these can affect the future of nursing particularly in the context of emergency or disaster planning... in a...
2 Pages(500 words)Essay

...leading to new behaviorist theories. The most widely publicized exponent of this approach was the Managerial Grid, which explained that there, was one best style of leadership, by various combinations of two factors regarding a concern for production and people. The situational approach suggested that the traits required of a leader differed, according to varying situations. To put it simply, the leader was a person who was in the right place at the right time. "Rather than a great man causing a great event to happen, the situational approach claims that great events are the product of historical forces that are gong to happen whether specific...
10 Pages(2500 words)Essay

...Introduction Several definitions have been brought forward by different scholars to explain what situational leadership is all about. In this discussion, we will refer to Paul Hersey and Kenneth Blanchard’s definition which states; it is the willingness and ability of a follower to do a task. They also state that in a leadership setting, the leaders should adjust their behavior to suit maturity level of their followers. They had their illustrated their four levels of maturity in what they came up with as a situational leadership model. They referred to it as Hersey-Blanchard model. The Hersey-Blanchard situational...
2 Pages(500 words)Assignment

...is to ensure that their employees have the capabilities to produce high quality service. He said that is through coaching, guidance, and management and development opportunities with a mandatory professional development tool “Performance Plus.” This strategy aimed at attracting and retaining the right people and building a safe and healthier working environment (NTPFES 2010-2011: Annual Report, 2011, p.8). Conclusion Successful leaders in any organization are able to recognize quickly the correct style to apply in a given situation. They make use of that style to achieve superior business results. The situational leadership theory enables a leader to identify...
6 Pages(1500 words)Research Paper

The LMX and the Path-Goal Theory

...﻿Statement of Understanding Introduction Several leadership theories have been proposed that helps in understanding the behavior, traits, skills, knowledge, and abilities required to become a successful leader. All theories such as the modern theories of different kinds of leadership such as the transformational leadership theory and the early theories of traits of leaders, all try to explain what is necessary for a leader to become successful. This paper will focus on two different kinds of theories, the LMX (Leader Member Exchange Theory) and the Path...
6 Pages(1500 words)Assignment

...How Situational Approach can be used in organization. Situational Leadership approach was created by Professor and Dr. Paul Hersey and Author Ken Blanchard in 1969. It is defined as business leadership theory that promotes the benefit of combining a range of managerial styles to cater for different people within the same organization. Unlike, the traditional view of executive manager who employs the same leadership tactics across the entire organization, more than likely passing directives down through subordinates and other intermediaries ( Hersey and Blanchard,1969). Situational leadership Approach...
2 Pages(500 words)Research Paper

...﻿The Situational Leadership Introduction Large numbers of organizations have adopted frameworks such as Herzberg’s Motivation and Hygiene Factors, which can assist an organization to motivate employees and to enhance the level of job satisfaction amid them that in turn increases their level of productivity as well as ensures organizational sustainability in the long-term (Graeff, 1997). In this paper, the objective is to highlight the strengths of ‘situational leadership’ along with the concept of Herzberg’s Motivation theory and Hygiene Factors to highlight upon the effectiveness of combining these frameworks when practicing leadership in an emergency services sector. Moreover, the study will also try to identify the reliability... and...
5 Pages(1250 words)Admission/Application Essay
sponsored ads
Save Your Time for More Important Things
Let us write or edit the assignment on your topic "Path-Goal and Situational Theories of Leadership" with a personal 20% discount.
GRAB THE BEST PAPER

Let us find you another Assignment on topic Path-Goal and Situational Theories of Leadership for FREE!