Comments (0)
Add to wishlistDelete from wishlist
Cite this document
Summary
It is necessary to develop evidence-based clinical guidelines as recommendations to clinicians who offer primary care for management of children aged 6 – 12 years old with uncomplicated otitis media (Takata & Chan et al., 2001, p. 239-247). The first step in doing so will have…
Download full paperFile format: .doc, available for editing
HIDE THIS PAPERGRAB THE BEST PAPER96.2% of users find it useful 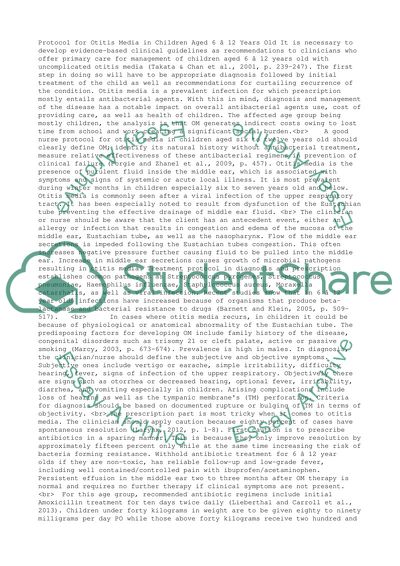 Protocol for Otitis Media in Children Aged 6 – 12 Years Old It is necessary to develop evidence-based clinical guidelines as recommendations to clinicians who offer primary care for management of children aged 6 – 12 years old with uncomplicated otitis media (Takata & Chan et al., 2001, p. 239-247). The first step in doing so will have to be appropriate diagnosis followed by initial treatment of the child as well as recommendations for curtailing recurrence of the condition. Otitis media is a prevalent infection for which prescription mostly entails antibacterial agents. With this in mind, diagnosis and management of the disease has a notable impact on overall antibacterial agents use, cost of providing care, as well as health of children. The affected age group being mostly children, the analysis is that OM generates indirect costs owing to lost time from school and work creating a significant social burden.
A good nurse protocol for otitis media in children aged six to twelve years old should clearly define OM; identify its natural history without antibacterial treatment, measure relative effectiveness of these antibacterial regimens in prevention of clinical failure (Forgie and Zhanel et al., 2009, p. 457). Otitis media is the presence of purulent fluid inside the middle ear, which is associated with symptoms and signs of systemic or acute local illness. It is most prevalent during winter months in children especially six to seven years old and below. Otitis media is commonly seen after a viral infection of the upper respiratory tract. It has been especially noted to result from dysfunction of the Eustachian tube preventing the effective drainage of middle ear fluid.
The clinician or nurse should be aware that the client has an antecedent event, either an allergy or infection that results in congestion and edema of the mucosa of the middle ear, Eustachian tube, as well as the nasopharynx. Flow of the middle ear secretions is impeded following the Eustachian tubes congestion. This often increases negative pressure further causing fluid to be pulled into the middle ear. Increase in middle ear secretions causes growth of microbial pathogens resulting in otitis media. Treatment protocol in diagnosis and prescription establishes common pathogens as Streptococcus pyrogenes, Streptococcus pneumoniae, Haemophilus influenzae, Staphylococcus aureus, Moraxella catarrhalis, as well as viral infection. Recent studies show that in 6 – 12 year olds infections have increased because of organisms that produce beta-lactamase and bacterial resistance to drugs (Barnett and Klein, 2005, p. 509-517).
In cases where otitis media recurs, in children it could be because of physiological or anatomical abnormality of the Eustachian tube. The predisposing factors for developing OM include family history of the disease, congenital disorders such as trisomy 21 or cleft palate, active or passive smoking (Marcy, 2003, p. 673-674). Prevalence is high in males. In diagnosis, the clinician/nurse should define the subjective and objective symptoms. Subjective ones include vertigo or earache, simple irritability, difficulty hearing, fever, signs of infection of the upper respiratory. Objectively there are signs such as otorrhea or decreased hearing, optional fever, irritability, diarrhea, and vomiting especially in children. Arising complications include loss of hearing as well as the tympanic membrane’s (TM) perforation. Criteria for diagnosis should be based on documented rupture or bulging of TM in terms of objectivity.
The prescription part is most tricky when it comes to otitis media. The clinician should apply caution because eighty percent of cases have spontaneous resolution (Larynx, 2012, p. 1-8). First caution is to prescribe antibiotics in a sparing manner. This is because they only improve resolution by approximately fifteen percent only while at the same time increasing the risk of bacteria forming resistance. Withhold antibiotic treatment for 6 – 12 year olds if they are non-toxic, has reliable follow-up and low-grade fever, including well contained/controlled pain with ibuprofen/acetaminophen. Persistent effusion in the middle ear two to three months after OM therapy is normal and requires no further therapy if clinical symptoms are not present.
For this age group, recommended antibiotic regimens include initial Amoxicillin treatment for ten days twice daily (Lieberthal and Carroll et al., 2013). Children under forty kilograms in weight are to be given eighty to ninety milligrams per day PO while those above forty kilograms receive two hundred and fifty to five hundred milligrams a day PO. For children these are chewable. For children who are allergic to penicillin, initial treatment will use Azithromycin with dosage in regimens. The five-day regimen, 10 mg/kg, max 500mg/day PO first day, and 5 mg/kg, max 250 mg/day PO for day two to five. The three-day regimen will be, 10 mg/kg, max 500mg/day PO for the three days and a single dose regimen, 30mg/kg, max 1500mg PO once. This is available in syrup, 100mg/5ml, 200mg/5ml, or as a capsule of 250mg. Non-pharmacological regimens entail modifying risk factors in order to improve resolution odds. The recommendations include avoiding passive smoking, controlling inhalant and food allergies, treat sinusitis, as well as limiting use of pacifiers after the age of one year.

... The Case Against Homework Many teachers think that homework is good because they think it reinforces a students learning. I do not feel that way. I believe that homework creates more challenges for a student especially when they have no one to help. When a child enters school, they spend more time in school then they do at home. They have some subjects that are easy for them and others that are very difficult. When they have to take work home, it takes away from the opportunity to rest and relax. All children need the opportunity to move away from school and do something different. I am not sure that there are really positive effects of homework. I know myself that if I understand the class, homework goes very fast. When I do... not, it...
3 Pages(750 words)Essay

...Homework Answers Part One Question Planning for an uncertain situation encompasses a broad process known as contingency planning. This broad process consists of the following components: A plan for incident response A plan for disaster recovery A plan for business continuity These three components account for all-round variables that constitute an uncertain occurrence, thereby informing the planning process for the underlying situation. Question 2 NIST defines a CP process that is made up of seven steps, which include: i. Formulation of a policy statement in relation to contingency planning. ii. Conducting an analysis of business impact. iii. Determination of preventive controls. iv. Development of strategies for...
3 Pages(750 words)Case Study

...Homework Questions American farmers were faced with various economic and social ills at the turn of the century. Farmers got faced with a banking system that insisted on the gold standard as its monetary system. The railroad system at the time was also deemed as capricious and unfair. The farmers also got faced with rampant land speculation that drove prices for land up. The populist movement referred to the advocacy of the people’s party in 1892 (Roark et al 352). The movement advocated against the industrial society at the time. The movement got based around poor and hard-pressed farmers. The movement called for the formation of a sub treasury, land reform, currency reform, and the empowerment of the common people....
1 Pages(250 words)Coursework

Let us find you another Essay on topic Homework for FREE!