Comments (0)
Add to wishlistDelete from wishlist
Cite this document
Summary
This element is important in understanding challenges of strategic management because they develop the desired achievement at a specified future time. Vision is a focal point of focus and serves to motivate the employees and stakeholders in the wake of their many demanding…
Download full paperFile format: .doc, available for editing
HIDE THIS PAPERGRAB THE BEST PAPER97% of users find it useful 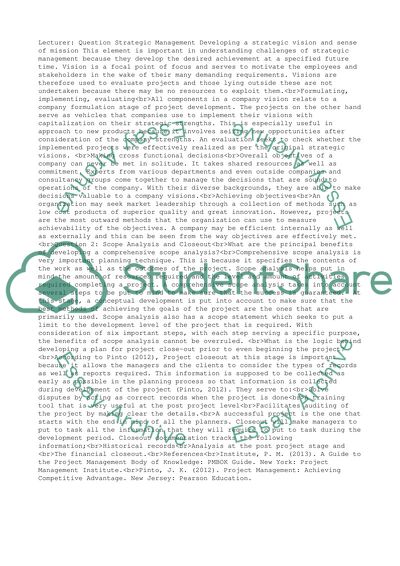 Lecturer: Question Strategic Management Developing a strategic vision and sense of mission This element is important in understanding challenges of strategic management because they develop the desired achievement at a specified future time. Vision is a focal point of focus and serves to motivate the employees and stakeholders in the wake of their many demanding requirements. Visions are therefore used to evaluate projects and those lying outside these are not undertaken because there may be no resources to exploit them.
Formulating, implementing, evaluating
All components in a company vision relate to a company formulation stage of project development. The projects on the other hand serve as vehicles that companies use to implement their visions with capitalization on their strategic strengths. This is especially useful in approach to new products because it involves seizing new opportunities after consideration of the company strengths. An evaluation seeks to check whether the implemented projects were effectively realized as per the original strategic visions.
Making cross functional decisions
Overall objectives of a company can never be met in solitude. It takes shared resources as well as commitment. Experts from various departments and even outside companies and consultancy groups come together to manage the decisions that are sound to operations of the company. With their diverse backgrounds, they are able to make decisions valuable to a company visions.
Achieving objectives
An organization may seek market leadership through a collection of methods such as low cost products of superior quality and great innovation. However, projects are the most outward methods that the organization can use to measure achievability of the objectives. A company may be efficient internally as well as externally and this can be seen from the way objectives are effectively met.
Question 2: Scope Analysis and Closeout
What are the principal benefits of developing a comprehensive scope analysis?
Comprehensive scope analysis is very important planning technique. This is because it specifies the contents of the work as well as the outcomes of the project. Scope analysis helps put in mind the amount of resources required and the level and amount of activities required completing a project. A comprehensive scope analysis takes into account several steps to be put to mind to make sure that the success is guaranteed. At this stage, a conceptual development is put into account to make sure that the best methods of achieving the goals of the project are the ones that are primarily used. Scope analysis also has a scope statement which seeks to put a limit to the development level of the project that is required. With consideration of six important steps, with each step serving a specific purpose, the benefits of scope analysis cannot be overruled.
What is the logic behind developing a plan for project close-out prior to even beginning the project?
According to Pinto (2012), Project closeout at this stage is important because it allows the managers and the clients to consider the types of records as well as reports required. This information is supposed to be collected as early as possible in the planning process so that information is collected during development of the project (Pinto, 2012). They serve to:
Solve disputes by acting as correct records when the project is done
A training tool that is very useful at the post project level
Facilitates auditing of the project by making clear the details.
A successful project is the one that starts with the end in mind of all the planners. Closeout will make managers to put to task all the information that they will require to put to task during the development period. Closeout documentation tracks the following information;
Historical records
Analysis at the post project stage and
The financial closeout.
References
Institute, P. M. (2013). A Guide to the Project Management Body of Knowledge: PMBOK Guide. New York: Project Management Institute.
Pinto, J. K. (2012). Project Management: Achieving Competitive Advantage. New Jersey: Pearson Education. Read More
Share:
Tags
Cite this document
(“Questions Essay Example | Topics and Well Written Essays - 500 words - 28”, n.d.)
Questions Essay Example | Topics and Well Written Essays - 500 words - 28. Retrieved from https://studentshare.org/management/1627927-questions