Comments (0)
Add to wishlistDelete from wishlist
Cite this document
Summary
Over the period of time, he was successful in building a company which was once the largest business in the world surpassing all other businesses. What is…
Download full paperFile format: .doc, available for editing
HIDE THIS PAPERGRAB THE BEST PAPER91.7% of users find it useful 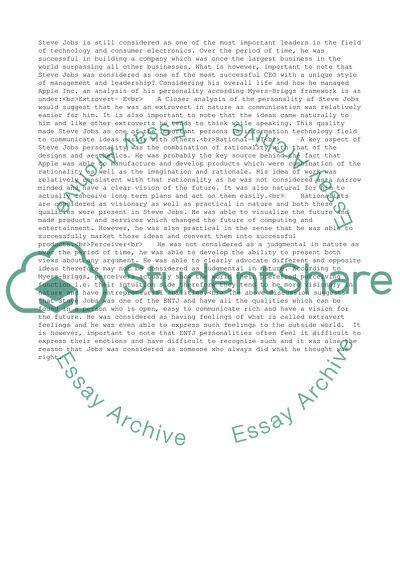 Steve Jobs is still considered as one of the most important leaders in the field of technology and consumer electronics. Over the period of time, he was successful in building a company which was once the largest business in the world surpassing all other businesses. What is however, important to note that Steve Jobs was considered as one of the most successful CEO with a unique style of management and leadership? Considering his overall life and how he managed Apple Inc. an analysis of his personality according Myers-Briggs framework is as under:
Extrovert- E
A Closer analysis of the personality of Steve Jobs would suggest that he was an extrovert in nature as communication was relatively easier for him. It is also important to note that the ideas came naturally to him and like other extroverts he tends to think while speaking. This quality made Steve Jobs as one of the important persons in information technology field to communicate ideas easily with others.
Rational- NT
A key aspect of Steve Jobs personality was the combination of rationality with that of the designs and aesthetics. He was probably the key source behind the fact that Apple was able to manufacture and develop products which were combination of the rationality as well as the imagination and rationale. His idea of work was relatively consistent with that rationality as he was not considered as a narrow minded and have a clear vision of the future. It was also natural for him to actually conceive long term plans and act on them easily.
Rationalists are considered as visionary as well as practical in nature and both these qualities were present in Steve Jobs. He was able to visualize the future and made products and services which changed the future of computing and entertainment. However, he was also practical in the sense that he was able to successfully market those ideas and convert them into successful products.
Perceiver
He was not considered as a judgmental in nature as over the period of time, he was able to develop the ability to present both views about any argument. He was able to clearly advocate different and opposite ideas therefore may not be considered as judgmental in nature. According to Myers-Briggs, perceivers actually show the world their preferred perceiving function i.e. their intuition side therefore they tend to be more visionary in nature and have entrepreneurial abilities.
The above discussion suggests that Steve Jobs was one of the ENTJ and have all the qualities which can be found in a person who is open, easy to communicate rich and have a vision for the future. He was considered as having feelings of what is called extravert feelings and he was even able to express such feelings to the outside world. It is however, important to note that ENTJ personalities often feel it difficult to express their emotions and have difficult to recognize such and it was also the reason that Jobs was considered as someone who always did what he thought was right. Read More
Share:
Tags
Cite this document
(“See word Assignment Example | Topics and Well Written Essays - 500 words”, n.d.)
See word Assignment Example | Topics and Well Written Essays - 500 words. Retrieved from https://studentshare.org/management/1627046-see-word

CHECK THESE SAMPLES OF See word

See Below. I also have a Word Document which has research notes

...212232 ANALYSIS As we all are aware, there are many differences between a hobby and business. There is a clear demarcation between the two; but it blurs at times. From the tax angle all the financial activities should be reported from whichever source they are derived, deducting the usual expenses and showing the rest as income. The question here is whether your horse farm falls under the category of HOBBIES or BUSINESS and to do so, it is necessary to understand the difference between the two from the tax standpoint. In a business, all income is reported; but the expenses too are taken into consideration and there are provisions of saving for the future on tax-deductible basis. A profitable hobby, if it remains so, naturally... ANALYSIS As...
6 Pages(1500 words)Essay

... criminals, tend to work on computer and internet as normal, using passwords to log on to their individual/ corporate accounts on corporate site or sharing personal information on their social network. Consequently, unintentionally they disclose their confidential passwords to attackers and allow them access to their private and confidential information, including corporate information. (words: 286) Reference Source as provided.... The most important lesson learnt from the opening case is to ensure that private and confidential information is not shared on the social network sites like Facebook, twitter etc. Moreover, it is also important that emails from unknown source should not be opened as it might be from some unscrupulous source and...
1 Pages(250 words)Assignment

... Should American apparel try to better align all the elements of its marketing strategy, or would continuing to generate this sort of controversy actually benefit the company by drawing more attention to its products? Introduction American Apparel deals in the sale of garments on a global scale. It mainly produces clothing for the young adults. The following analysis looks at the various aspects of the company with an intention of proposing what the company should do regarding its sexual marketing campaign. The 3C’s Company The company is widely admired for the stance it maintains on pro-labor practices. It supports the employment of immigrants, and provides its employees with a wage that helps them meet their needs successfully... Should...
2 Pages(500 words)Assignment

...CASE: HARPO What are the potential dangers of having one super-powerful leader of an organization? One of the greatest dangers of a powerful leader in charge of an organization is that people are only drawn to that leader and not the work of the organization. Strong leadership is important for any organization to succeed, but to give one person so much power and control is like putting all the eggs in one basket. Things appear great while there is no controversy, but if that leader is exposed as part of a scandal that the reputation can damage the company brand. A case in point occurred in 2007 when one of the teachers at the Leadership Academy in South Africa was accused of sexually abusing students. Because Oprah attached her... HARPO What...
2 Pages(500 words)Essay

...from malnutrition. Kozol would see Christopher running out in traffic begging for money and food. At the age of 10, Christopher had already started traffic drugs along the streets, which saw him arrested and taken to prison (Kozol, 2013). As soon as he was released from prison for the last time, Christopher died from drug overdose. He is one of the boys Kozol writes about who died at early ages, one who died from suicide, and the other one died from surfing on train. Christopher’s two sisters were stable, but despite the best efforts of their parents, harshness of the surrounding made boy’s lives very difficult. The story of Christopher’s family is a good example how psychosocial and material well-being is affected by...
5 Pages(1250 words)Essay

... Case Study Team building exercises have helped improved productivity in many organizations. These exercises help employees to learn how to communicate effectively, which is translated to the workplace (West 7). Effective communication would result in great working relationships and effective teamwork. The ultimate effect is an increase in team productivity. Moreover, team-building exercises give work mates to develop their roles within the team. People possess different skills, which might important for the team performance. Team building helps individuals to find their niche within the team, which translates to maximization of team output. Team building exercises help in the development trust among employees. Trust... Case Study Team...
2 Pages(500 words)Essay
sponsored ads
Save Your Time for More Important Things
Let us write or edit the assignment on your topic "See word" with a personal 20% discount.
GRAB THE BEST PAPER

Let us find you another Assignment on topic See word for FREE!