Comments (0)
Add to wishlistDelete from wishlist
Cite this document
Summary
The Development, Relief and Education for Alien Minors (DREAM) Act, is a bipartisan legislation that has been introduced in every congress since 2001. It seeks to provide a path to legalization for eligible unauthorized youth and young adults. The DREAM Act would extend…
Download full paperFile format: .doc, available for editing
HIDE THIS PAPERGRAB THE BEST PAPER97.5% of users find it useful 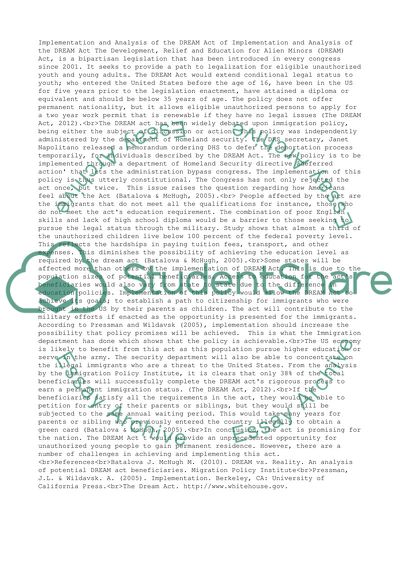 Extract of sample "Implementation and Analysis the Dream Act"

Implementation and Analysis of the DREAM Act of Implementation and Analysis of the DREAM Act The Development, Relief and Education for Alien Minors (DREAM) Act, is a bipartisan legislation that has been introduced in every congress since 2001. It seeks to provide a path to legalization for eligible unauthorized youth and young adults. The DREAM Act would extend conditional legal status to youth; who entered the United States before the age of 16, have been in the US for five years prior to the legislation enactment, have attained a diploma or equivalent and should be below 35 years of age. The policy does not offer permanent nationality, but it allows eligible unauthorized persons to apply for a two year work permit that is renewable if they have no legal issues (The DREAM Act, 2012).
The DREAM act has been widely debated upon immigration policy, being either the subject of discussion or action. This policy was independently administered by the department of Homeland security. The DHS secretary, Janet Napolitano released a memorandum ordering DHS to defer the deportation process temporarily, for individuals described by the DREAM Act. The new policy is to be implemented through a department of Homeland Security directive ‘deferred action’ that lets the administration bypass congress. The implementation of this policy is thus utterly constitutional. The Congress has not only rejected the act once, but twice. This issue raises the question regarding how Americans feel about the Act (Batalova & McHugh, 2005).
People affected by the act are the immigrants that do not meet all the qualifications for instance, those who do not meet the act’s education requirement. The combination of poor English skills and lack of high school diploma would be a barrier to those seeking to pursue the legal status through the military. Study shows that almost a third of the unauthorized children live below 100 percent of the federal poverty level. This reflects the hardships in paying tuition fees, transport, and other expenses. This diminishes the possibility of achieving the education level as required by the dream act (Batalova & McHugh, 2005).
Some states will be affected more than others by the implementation of DREAM Act. This is due to the population sizes of potential beneficiaries. Access to education for the act’s beneficiaries would also vary from state to state due to the difference in education policies. Implementation of this policy would allow the DREAM Act to achieve its goals; to establish a path to citizenship for immigrants who were brought in the US by their parents as children. The act will contribute to the military efforts if enacted as the opportunity is presented for the immigrants. According to Pressman and Wildavsk (2005), implementation should increase the possibility that policy promises will be achieved. This is what the Immigration department has done which shows that the policy is achievable.
The US economy is likely to benefit from this act as this population pursue higher education or serve in the army. The security department will also be able to concentrate on the illegal immigrants who are a threat to the United States. From the analysis by the immigration Policy Institute, it is clears that only 38% of the total beneficiaries will successfully complete the DREAM act’s rigorous process to earn a permanent immigration status. (The DREAM Act, 2012).
If the beneficiaries satisfy all the requirements in the act, they would be able to petition for entry of their parents or siblings, but they would still be subjected to the same annual waiting period. This would take many years for parents or sibling who previously entered the country illegally to obtain a green card (Batalova & McHugh, 2005).
In conclusion, the act is promising for the nation. The DREAM Act t would provide an unprecedented opportunity for unauthorized young people to gain permanent residence. However, there are a number of challenges in achieving and implementing this act.
References
Batalova J. McHugh M. (2010). DREAM vs. Reality. An analysis of potential DREAM act beneficiaries. Migration Policy Institute
Pressman, J.L. & Wildavsk. A. (2005). Implementation. Berkeley, CA: University of California Press.
The Dream Act. http://www.whitehouse.gov. Read More
Share:
Tags
Cite this document
(“Implementation and Analysis the Dream Act Article”, n.d.)
Implementation and Analysis the Dream Act Article. Retrieved from https://studentshare.org/management/1610485-implementation-and-analysis-the-dream-act

“Implementation and Analysis the Dream Act Article”, n.d. https://studentshare.org/management/1610485-implementation-and-analysis-the-dream-act.
Comments (0)
Click to create a comment or rate a document

CHECK THESE SAMPLES OF Implementation and Analysis the Dream Act

Proposal Essay on The DREAM Act

...of immigration enforcement is a precondition to the enactment of the proposed DREAM Act. Thesis Statement: The DREAM Act can benefit both the US economy and the young immigrants in the country provided that immigration enforcement within the provisions of the proposed Act is properly implemented and fraudulent practices are prevented. Analysis Benefits: The DREAM Act seeks to legalize the undocumented youth and young adults in the country if they fulfill certain educational criteria and effort to obtain college graduation. From an economic viewpoint, legalization of unauthorized students...
3 Pages(750 words)Essay

...?Project Management Insert Insert Forum Analysis Rapid result initiative remains a vital in the implementation of short and long-term goals in project management. The usage of such strategy presents one of the examples, and in Madagascar, where the population rise reduced through the implementation of rapid result initiative in the year 2005, Madagascar remained to be one of the poorest nations in the world. According to the culture of Malagasy people large families and acceptance of large populations resulted in such predicaments. The young and newly wedded couples encouraged having a minimum of fourteen children, this by no means provided an avenue for family planning. The ministry of...
8 Pages(2000 words)Essay

...The DREAM Act Among the three million who graduate from high schools in the United s every year, approximately sixty five thousand of them are termed illegal immigrants. Although they have lived in the United States for most of their lives and know no other way of life other than they live in America. However, because they are labeled illegal immigrants - which is not their fault because they did not choose to come to come to America on their own – they have very little opportunity to test their dreams and prosper in this great nation. Instead, they have become the victims of government deportation due to their illegal immigrant status in the United States and have found themselves in...
4 Pages(1000 words)Essay

...Topic Dream Act Dream act is a bill introduced by American government in 2001 and was reintroduced in 2009 by senator Orion Hatch to support the immigrant youth population in education and achieving American citizenship. These youth are illegal residents in America and do not have any helping hand but have dark future. However, the children of illegal immigrants to qualify for dream act must have to comply with certain rules and criteria. When all the requirements of the Dream Act are met by the candidate, then the minor is given permission to stay in the country for 6 years. Here the...
2 Pages(500 words)Essay

...The Dream Act On the 1st of August 2001, two Americans, Hatch and Dick Durbin presented a proposal known as the “Dream Act” to the Senate. The legislative proposal called for the provision of permanent residency for immigrants who proved to be of good morals, under conditions. The qualifying immigrants would be required to have graduated from United States high schools, to have arrived in the United States as minors, and must have been residing in the United States for a minimum of five years before the introduction of the bill. In addition, if these qualifying immigrants completed at least two years of military service at a higher learning institution, they would earn a...
8 Pages(2000 words)Essay

The Effects of the Dream Act on the Family

...mental health and well being. The Dream Act will be an improvement in the lives of these youths, their families, and the country as a whole. WORK CITED Guzmen, Juan Carlos, and Raul C. Jara. "The Economic Benefits of Passing the DREAM Act." Center for American Progress. (2012): 1-32. Print. Mahatmya, Duhita, and Lisa Gring-Pemble. "Linguistics Representations of Immigrants in the Dream Act and Implications for Family Impact Analysis." National Council of Family Relations. (2012): 1-18. Print. Messerli, Joe. "Should a path to U.S. citizenship for illegal immigrants (part of the DREAM...
6 Pages(1500 words)Essay

Deontologay and the dream act

...Deontology and the American Dream number Deontology and the American Dream The American dream act will allow immigrants who entered the county below the age of 16 years to be allowed to attend college and finally be granted citizenship. However, this shall be after vigorous process is conducted that will take a 6 year period before being granted citizenship. They have to prove that they have either attended college or served in the military for a period of not less than 2 years (Miranda). The young people will also need to prove that have never engaged in any criminal activities throughout their stay in the country. How a deontologist would handle this issue It is...
2 Pages(500 words)Essay

...Immigration to the U.S. from 1900 A.D. to the Dream Act Adelina Ajdini Bloom Module Political Science 481 Module ID: Submission date: March 27, 2015 Abstract: The present study aims to explore the history of the legislation made by the US political authorities, related to immigration policies and strategies, from the beginning of twentieth century onward, by providing a brief overview of immigration laws introduced since its establishment in 1776. The legislation was frequently executed and implemented at federal and state levels in the wake of the consecutive flow of immigration witnessed by the populations belonging to diverse geographical zones and regions of the globe to the Unites...
50 Pages(12500 words)Thesis
sponsored ads
Save Your Time for More Important Things
Let us write or edit the article on your topic "Implementation and Analysis the Dream Act" with a personal 20% discount.
GRAB THE BEST PAPER

Let us find you another Article on topic Implementation and Analysis the Dream Act for FREE!