Comments (0)
Add to wishlistDelete from wishlist
Cite this document
Summary
The paper dwells on the comparison of the managerial terms: group and team. The author points out the main distinguishing factor that differentiates a group from a team. It is the mutual accountability in a team as compared to individual accountability in a group. …
Download full paperFile format: .doc, available for editing
HIDE THIS PAPERGRAB THE BEST PAPER97.3% of users find it useful 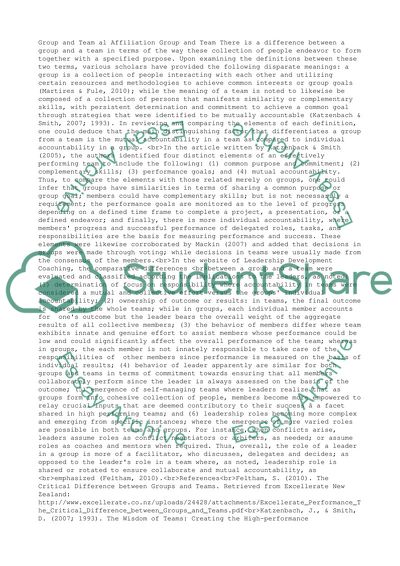 Extract of sample "Group and Team"

Group and Team al Affiliation Group and Team There is a difference between a group and a team in terms of the way these collection of people endeavor to form together with a specified purpose. Upon examining the definitions between these two terms, various scholars have provided the following disparate meanings: a group is a collection of people interacting with each other and utilizing certain resources and methodologies to achieve common interests or group goals (Martires & Fule, 2010); while the meaning of a team is noted to likewise be composed of a collection of persons that manifests similarity or complementary skills, with persistent determination and commitment to achieve a common goal through strategies that were identified to be mutually accountable (Katzenbach & Smith, 2007; 1993). In reviewing and comparing the elements of each definition, one could deduce that the main distinguishing factor that differentiates a group from a team is the mutual accountability in a team as compared to individual accountability in a group.
In the article written by Katzenback & Smith (2005), the authors identified four distinct elements of an effectively performing team to include the following: (1) common purpose and commitment; (2) complementary skills; (3) performance goals; and (4) mutual accountability. Thus, to compare the elements with those related merely on groups, one could infer that groups have similarities in terms of sharing a common purpose or group goal; members could have complementary skills; but is not necessarily a requirement; the performance goals are monitored as to the level of progress depending on a defined time frame to complete a project, a presentation, or a defined endeavor; and finally, there is more individual accountability, where members’ progress and successful performance of delegated roles, tasks, and responsibilities are the basis for measuring performance and success. These elements were likewise corroborated by Mackin (2007) and added that decisions in groups were made through voting; while decisions in teams were usually made from the consensus of the members.
In the website of Leadership Development Coaching, the comparative differences
between a group and a team were evaluated and classified according the implications to the leaders, as noted: (1) determination of focus on responsibility where accountability in teams were considered a mutual and collective effort versus the groups’ individual accountability; (2) ownership of outcome or results: in teams, the final outcome is shared by the whole teams; while in groups, each individual member accounts for one’s outcome but the leader bears the overall weight of the aggregate results of all collective members; (3) the behavior of members differ where team exhibits innate and genuine effort to assist members whose performance could be low and could significantly affect the overall performance of the team; whereas in groups, the each member is not innately responsible to take care of the responsibilities of other members since performance is measured on the basis of individual results; (4) behavior of leader apparently are similar for both groups and teams in terms of commitment towards ensuring that all members collaborately perform since the leader is always assessed on the basis of the outcome; (5) emergence of self-managing teams where leaders realize that as groups form into cohesive collection of people, members become more empowered to relay crucial inputs that are deemed contributory to their success – a facet shared in high performing teams; and (6) leadership roles becoming more complex and emerging from specific instances; where the emergence of more varied roles are possible in both teams and groups. For instance, when conflicts arise, leaders assume roles as conflict negotiators or arbiters, as needed; or assume roles as coaches and mentors when required. Thus, overall, the role of a leader in a group is more of a facilitator, who discusses, delegates and decides; as opposed to the leader’s role in a team where, as noted, leadership role is shared or rotated to ensure collaborate and mutual accountability, as
emphasized (Feltham, 2010).
References
Feltham, S. (2010). The Critical Difference between Groups and Teams. Retrieved from Excellerate New Zealand: http://www.excellerate.co.nz/uploads/24428/attachments/Excellerate_Performance_The_Critical_Difference_between_Groups_and_Teams.pdf
Katzenbach, J., & Smith, D. (2007; 1993). The Wisdom of Teams: Creating the High-performance Organization. Boston: Harvard Business School.
Katzenback, J., & Smith, D. (2007). The Discipline of Teams. Harvard Business Review, 1.
Mackin, D. (2007). The Difference Between A Team And A Group. Retrieved from The Sideroad: http://www.sideroad.com/Team_Building/difference-between-team-and-group.html
Martires, C., & Fule, G. (2010). Management of Human Behavior in Organizations. Quezon City: National Bookstore.
Team vs Group: Implications for Leaders. (n.d.). Retrieved from Leadership Development Coaching: http://www.leadership-development-coaching.com/index.html Read More
Share:
Tags
Cite this document
(“Group and Team Essay Example | Topics and Well Written Essays - 500 words”, n.d.)
Group and Team Essay Example | Topics and Well Written Essays - 500 words. Retrieved from https://studentshare.org/management/1609504-group-and-team

CHECK THESE SAMPLES OF Group and Team

...?Running Head: Team and Group Paper Team and Group Team and Group The words team and group have beenused synonymously in several contexts. However, this might not be the case as the two words have different meanings, especially when it comes to the organizational context. The erroneous use of these two words interchangeably to refer to the same thing arises from the fact that both of them refer to a large collection of people or things. Below are the definitions of the two words and the different contexts in which they apply. The word group refers to a collection or crowd of people who...
2 Pages(500 words)Essay

...?Developing effective teams is one of the most important aspects of a job that a manager faces in modern organisations. After years of thorough research, it can be safely said that team work is more productive for organisations than individual work. The reason why team work is more productive than working alone is because work-teams create high levels of synergy that are missing in individual effort. Hence, many organisations divide work in projects and create teams and task groups to complete this work. Similarly, creating effective teams have become an important part of a manager's job. (Daft) Teams are...
3 Pages(750 words)Essay

...? Group and Team Behavior College 13/7 Group and Team Behavior 3M is a USA based multinational company. It operates in 65 countries with worldwide sales of $ 26.7 billion and 80,000 employees. Since 1990s, company has adopted concept of using self-directed teams. As per one definition “self directed work team-SDWT is a group of employees who combine different skills and talents to work without usual managerial supervision towards a common purpose or goal”(SDWT definition).These teams are independent units, which are empowered to take decisions, manage processes and adapt to customer needs. Teams also perform management or supervisory role along with doing work. The revolutionary concept was adopted purely due to market needs... . Rewarding...
1 Pages(250 words)Assignment

...? Small Group Team Amongst all the sports where victory is often contingent on team dynamics, football is perhaps a sport which requires the most fluid communication flow between the playing eleven on the field. The communication factor comes into play even more so in club football, where players from different nationalities play as part of the same team. Reflective of the current trends of globalization, club football especially in the English Premier league is home to stars from all continents backed by strong financial investments. With high expectations attached to their performances, all the players are expected to gel in well with their team mates...
9 Pages(2250 words)Essay

...RUNNING HEAD SMALL GROUP AND TEAM COMMUNICATION Small Group and Team Communication Decision making process is often regarded as a core of effective organizational performance and effective management. All employees are viewed as decision makers. The traditional hierarchical organization does not operate effectively in a world characterized by constant dynamic change. Investing all power in the hands of top management implies that top management has the solutions to all problems. In a static world, top management may indeed know most of the solutions. In a turbulent world, though, no one grasps more than a small fraction of the answers. Effective group...
5 Pages(1250 words)Essay

...Organization’s today face turbulent changes and the outcome depends on the individual and team responses. There is always a tendency to resist change. Various sociologists, psychologists and organizational behaviorists have attempted to develop theories of group dynamics which can positively affect the organization. Every individual is a part of the social group and hence the outcome and productivity of an individual depends upon the group dynamics. Several types of teams exist in an organization and different types of relationships are experienced. This paper will assess the strengths and limitations of group dynamics. Types of teams A team has been defined as “an energetic group of people who are committed to achieving common... will...
11 Pages(2750 words)Essay

Drawing on personal experience and theories covered in module, prepare a detailed argument to a sceptical audience justifying the advantages and effectiveness of group and team performance

...Drawing on personal experience and theories, prepare a detailed argument to a sceptical audience justifying the advantages and effectiveness of groupand team performance Working in a group or as part of a team can often be regarded as a recipe for disaster. Disagreement, personality clashes and conflicting ways of approaching the task in hand can all be cited as reasons why group work is not successful. However, if these issues are overcome, or ideally avoided completely, team work can be highly effective, holding many advantages over working individually. This essay will outline how teams can be more productive and successful than...
10 Pages(2500 words)Essay

...having their new design of A700 appear in the Oshkosh air show. They had only six weeks to achieve this goal. Thus, they were motivated to work as hard as possible to ensure that the plane was complete by that time. Due to this, they had to improve on their speed to make sure they beat the deadline. The Adam Aircraft team members display a variety of characteristics of an effective work group. For instance, there is a clear unity of purpose; to construct A700 within the stipulated time-frame. The group is also self conscious about its own operations. This is depicted in the manner in which everyone takes part to ensure the achievement of their goal of construction A700 and have it...
1 Pages(250 words)Case Study

Discussion of the Political Typology Quiz

4 Pages(1000 words)Assignment
sponsored ads
Save Your Time for More Important Things
Let us write or edit the essay on your topic "Group and Team" with a personal 20% discount.
GRAB THE BEST PAPER

Let us find you another Essay on topic Group and Team for FREE!