Comments (0)
Add to wishlistDelete from wishlist
Cite this document
Summary
There was a lack of uniformity with which managers were approaching management as a discipline and thus resulting into different level of performances. It is also…
Download full paperFile format: .doc, available for editing
HIDE THIS PAPERGRAB THE BEST PAPER95.7% of users find it useful 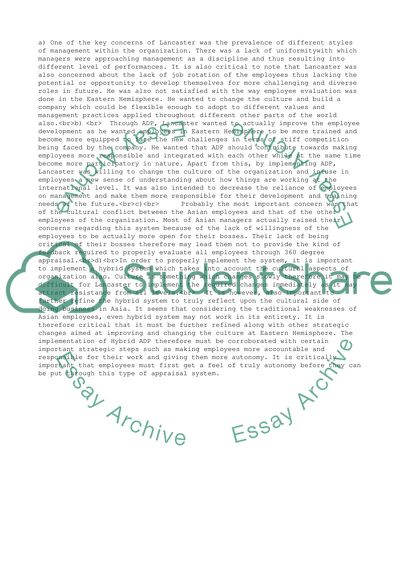 Extract of sample "Black& Decker-eastern Hemisphere and the ADP initiative,"

a) One of the key concerns of Lancaster was the prevalence of different styles of management within the organization. There was a lack of uniformitywith which managers were approaching management as a discipline and thus resulting into different level of performances. It is also critical to note that Lancaster was also concerned about the lack of job rotation of the employees thus lacking the potential or opportunity to develop themselves for more challenging and diverse roles in future. He was also not satisfied with the way employee evaluation was done in the Eastern Hemisphere. He wanted to change the culture and build a company which could be flexible enough to adopt to different values and management practices applied throughout different other parts of the world also.
b)
Through ADP, Lancaster wanted to actually improve the employee development as he wanted employees in Eastern Hemisphere to be more trained and become more equipped to face the new challenges in terms of stiff competition being faced by the company. He wanted that ADP should contribute towards making employees more responsible and integrated with each other while at the same time become more participatory in nature. Apart from this, by implementing ADP, Lancaster was willing to change the culture of the organization and infuse in employees a new sense of understanding about how things are working at the international level. It was also intended to decrease the reliance of employees on management and make them more responsible for their development and training needs of the future.
c)
Probably the most important concern was that of the cultural conflict between the Asian employees and that of the other employees of the organization. Most of Asian managers actually raised their concerns regarding this system because of the lack of willingness of the employees to be actually more open for their bosses. Their lack of being critical of their bosses therefore may lead them not to provide the kind of feedback required to properly evaluate all employees through 360 degree appraisal.
d)
In order to properly implement the system, it is important to implement a hybrid system which takes into account the cultural aspects of organization also. Culture is something which changes slowly therefore it may be difficult for Lancaster to implement the required changes immediately as it may attract resistance from all levels.
It is however, also important to further refine the hybrid system to truly reflect upon the cultural side of doing business in Asia. It seems that considering the traditional weaknesses of Asian employees, even hybrid system may not work in its entirety. It is therefore critical that it must be further refined along with other strategic changes aimed at improving and changing the culture at Eastern Hemisphere. The implementation of Hybrid ADP therefore must be corroborated with certain important strategic steps such as making employees more accountable and responsible for their work and giving them more autonomy. It is critically important that employees must first get a feel of truly autonomy before they can be put through this type of appraisal system. Read More
Share:
Tags
Cite this document
(“Black& Decker-eastern Hemisphere and the ADP initiative, Essay”, n.d.)
Black& Decker-eastern Hemisphere and the ADP initiative, Essay. Retrieved from https://studentshare.org/management/1604289-black-decker-eastern-hemisphere-and-the-adp-initiative

“Black& Decker-Eastern Hemisphere and the ADP Initiative, Essay”, n.d. https://studentshare.org/management/1604289-black-decker-eastern-hemisphere-and-the-adp-initiative.
Comments (0)
Click to create a comment or rate a document

CHECK THESE SAMPLES OF Black& Decker-eastern Hemisphere and the ADP initiative,

...because of trust issue. Apart from that there is no trend of suggesting something to your boss which you think would be better then what he presented. So to break this tradition ADP will play a key role in development of employees professional and work life. Another major reason here is that as ADP system is becoming a new standard in the market so the businesses should move towards standardization rather them getting themselves stuck in the dilemma that whether it will be a wise choice or not. Also by choosing ADP in the Eastern Hemisphere there will be standardize managerial development system throughout Black & Decker...
5 Pages(1250 words)Case Study

...to such expansion. In the same way, challenges certainly abound in the process. Question 2 The global expansion strategy has several implications for the organization. The major initial focus should be the integration of all the operations of the Emhart's units into the organization in order to enhance the management process. The new organization structure will have to be redesigned in order to take account of the increased operations and the introduction of new units into the business. In any case, the existing structure of Black & Decker shows that much of the operations are basically classified into functions and geography. There should be a proper hierarchy within the organization in...
6 Pages(1500 words)Case Study

...?SWOT Analysis Strengths Black & Decker is a global brand which is known as the best for its power tools and accessories. Black & Decker has a strongposition in the home appliances and domestic tools division. The brand is equally popular in Europe and U.S and is ranked among the top ten brands worldwide. Black & Decker has several sub brands which it can be used as strategic option for surviving in the competitive global environment. The brand has been divided into three segments namely domestic, tradesmen and professional industrial segments. Each segment is catered with products that satisfy the customers’ needs and requirements. The...
5 Pages(1250 words)Research Paper

The Business of Fashion Design

...﻿Black & Decker - Eastern Hemisphere and ADP Initiative Case Bill Lancaster, the President of the Black & Decker-Eastern Hemisphere was facing a critical scenario which required addressing. Black & Decker had received commendable successes in the Europe and North America but had been deprived of similar level of success in Asia as well as Latin America. Also, they faced certain challenges in these regions. Bill Lancaster, after his appointment as President in October 1995, wanted to set things right in his region i.e....
5 Pages(1250 words)Case Study

15 Pages(3750 words)Dissertation
sponsored ads
Save Your Time for More Important Things
Let us write or edit the essay on your topic "Black& Decker-eastern Hemisphere and the ADP initiative," with a personal 20% discount.
GRAB THE BEST PAPER

Let us find you another Essay on topic Black& Decker-eastern Hemisphere and the ADP initiative, for FREE!