Comments (0)
Add to wishlistDelete from wishlist
Cite this document
Summary
In the essay “Stanley Black & Decker Company” the author analyses the largest tools manufacturing company in the world. The company has many years in experience and is a product of a merge of two companies. This study explores the investment qualities of Stanley Black & Decker Company…
Download full paperFile format: .doc, available for editing
HIDE THIS PAPERGRAB THE BEST PAPER98.8% of users find it useful 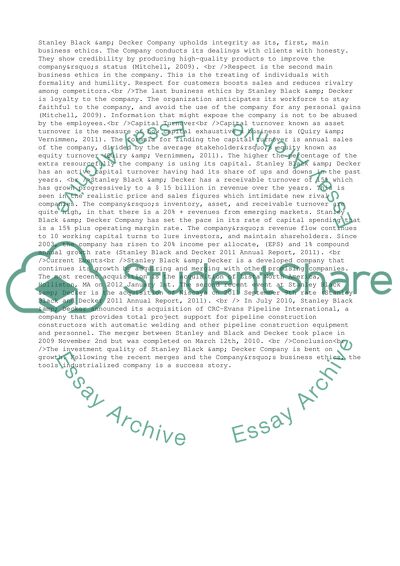 ...?Black & Decker - Eastern Hemisphere and ADP Initiative Case Table of Contents Table of Contents 2 What Are Lancaster’s Concerns about the EasternHemisphere Organization? Will ADP Address Those Weaknesses? 3 2) What Concerns Do Asian Managers Have About ADP? How Substantive Are These Concerns? 4 3) What Action Should Lancaster Take and Why? 6 Bibliography 8 1) What Are Lancaster’s Concerns about the Eastern Hemisphere Organization? Will ADP Address Those Weaknesses? Bill Lancaster, the President of the Black & Decker-Eastern Hemisphere was facing a critical scenario which required addressing. Black & Decker had received commendable successes in the Europe and North America but had been deprived of similar level of success in Asia as well...
5 Pages(1250 words)Case Study

... This paper seeks to look into the prospects of Black and Decker with respects to its expansion plans. This follows the acquisition of Emhart Corporation and the need for the organization to establish a global lock business. It is realized that several opportunities are certainly available for exploration and progress. Nevertheless, the organization has to wade through myriad challenges before it can realize its objectives. All these developments call for a restructuring of the organization in order to provide the perfect ground for effecting these changes. More importantly, it is realized that the organization has the ability to establish a strong base in the world in this particular industry. Black & Decker International Question 1...
6 Pages(1500 words)Case Study

... percent, the company can use its strategic options to make the most of this opportunity. As Black & Decker is popular among domestic consumers so it can offer more and improved products for this category to grab more market share and profits. Focusing more on marketing and advertising activities can help strengthen the brand image and reputation of Black & Decker. The distributors are not quite doubtful with Makita’s way of business so Black & Decker can stand out against it competitors by exploiting this opportunity. Changing the color of the Black & Decker tools from charcoal grey to yellow can appeal the tradesmen as yellow reflects safety and seems more professional. Black & Decker can make use of its sub brands to attract...
5 Pages(1250 words)Research Paper

... 03 May 2006 Black & Decker Corporation - Detailed Financial Performance Analysis The Black & Decker Corporation (NYSE:BDK), a leading manufacturer and marketer of power tools and accessories, hardware and home improvement products and technology based fastening systems was incorporated in Maryland in 1910. It enjoys its extensive market spread over 100 countries and a strong brand name in its three operating business segments namely, Power tools and accessories, Hardware and Home improvement and Fastening and assembly systems. The company has been into a large-scale acquisition and strategic sale propositions for some time now. These include acquisition of Emhart Corporation in 1989, Baldwin Hardware Corporation and Weiser Lock...
10 Pages(2500 words)Research Paper

...Table of contents Executive Summary.. 2-4 1 Introduction.. 5-6 2.0 Case analysis. 6-8 3.0 Conclusion. 9-10 4.0 Recommendations10-11 5.0 Reference 12-14 Executive Summary This report examines the character of Black and Decker's Expansion Plan in the 1950's and 1960's.The strategies that the company had been pursuing. The key feature of the organization structures that Black and Decker has been operating with during this time. This report will further in detail, analyze if the strategy and structure, chosen by Black and Decker at this point in time, was sensible. Keeping in mind, the competition in the market. Furthermore, how Black and Decker has been able to cope with the competition, strategy...
14 Pages(3500 words)Essay

...a) One of the key concerns of Lancaster was the prevalence of different styles of management within the organization. There was a lack of uniformitywith which managers were approaching management as a discipline and thus resulting into different level of performances. It is also critical to note that Lancaster was also concerned about the lack of job rotation of the employees thus lacking the potential or opportunity to develop themselves for more challenging and diverse roles in future. He was also not satisfied with the way employee evaluation was done in the Eastern Hemisphere. He wanted to change the culture and build a company which could be flexible enough to adopt to different values and management practices applied throughout...
2 Pages(500 words)Essay

In view of the change plan being proposed at Black and Decker, this report attempts to suggest and establish the best way Mr. Grunewald can utilize the employees at Black & Decker as well as recommending a suitable human resource development (HRD) strategy that can be used to manage and empower the human resources at the organization.
Founded in 1917, Black & Decker manufactured and sold a wide range of electric and battery-powered power tools (and accessories), household products, outdoor products, locks and hardware, plumbing products and mechanical fastening systems. Following a decline in business that characterized the company for a certain period, Black & Decker underscored to transform into a global marketin...
10 Pages(2500 words)Case Study
sponsored ads
Save Your Time for More Important Things
Let us write or edit the essay on your topic "Stanley Black & Decker Company" with a personal 20% discount.
GRAB THE BEST PAPER

Let us find you another Essay on topic Stanley Black & Decker Company for FREE!