Comments (0)
Add to wishlistDelete from wishlist
Cite this document
Summary
The value and importance of Corporate Social Responsibility (CSR) for individual businesses and society as a whole has been acknowledged across the globe, (Kaufmann and Olaru, 2012). The paper examines the impact of Corporate Social Responsibility (CSR) on business performance…
Download full paperFile format: .doc, available for editing
HIDE THIS PAPERGRAB THE BEST PAPER97.9% of users find it useful 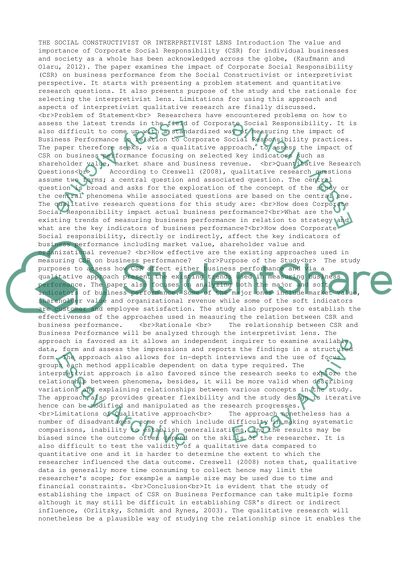 Extract of sample "The Social Constructivist or Interpretivist Lens"

THE SOCIAL CONSTRUCTIVIST OR INTERPRETIVIST LENS Introduction The value and importance of Corporate Social Responsibility (CSR) for individual businesses and society as a whole has been acknowledged across the globe, (Kaufmann and Olaru, 2012). The paper examines the impact of Corporate Social Responsibility (CSR) on business performance from the Social Constructivist or interpretivist perspective. It starts with presenting a problem statement and quantitative research questions. It also presents purpose of the study and the rationale for selecting the interpretivist lens. Limitations for using this approach and aspects of interpretivist qualitative research are finally discussed.
Problem of Statement
Researchers have encountered problems on how to assess the latest trends in the field of Corporate Social Responsibility. It is also difficult to come up with a standardized way of measuring the impact of Business Performance in relation to Corporate Social Responsibility practices. The paper therefore seeks, via a qualitative approach, to assess the impact of CSR on business performance focusing on selected key indicators such as shareholder value, market share and business revenue.
Quantitative Research Questions
According to Creswell (2008), qualitative research questions assume two forms; a central question and associated question. The central question is broad and asks for the exploration of the concept of the study or the central phenomena while associated questions are based on the central one. The qualitative research questions for this study are:
How does Corporate Social Responsibility impact actual business performance?
What are the existing trends of measuring business performance in relation to strategy and what are the key indicators of business performance?
How does Corporate Social responsibility, directly or indirectly, affect the key indicators of business performance including market value, shareholder value and organizational revenue?
How effective are the existing approaches used in measuring CSR on business performance?
Purpose of the Study
The study purposes to assess how CSR affect either business performance and via a qualitative approach present the existing trends used in measuring business performance. The paper also focuses on analyzing both the major and soft indicators of business performance. Some of the major ones include market value, shareholder value and organizational revenue while some of the soft indicators are customer and employee satisfaction. The study also purposes to establish the effectiveness of the approaches used in measuring the relation between CSR and business performance.
Rationale
The relationship between CSR and Business Performance will be analyzed through the interpretivist lens. The approach is favored as it allows an independent inquirer to examine available data, form and assess the impressions and reports the findings in a structured form. The approach also allows for in-depth interviews and the use of focus groups each method applicable dependent on data type required. The interpretivist approach is also favored since the research seeks to explore the relationship between phenomena, besides, it will be more valid when describing variations and explaining relationships between various concepts in the study. The approach also provides greater flexibility and the study design is iterative hence can be modified and manipulated as the research progresses.
Limitations of Qualitative approach
The approach nonetheless has a number of disadvantages some of which include difficulty in making systematic comparisons, inability to establish generalizations, and the results may be biased since the outcome often depend on the skills of the researcher. It is also difficult to test the validity of a qualitative data compared to quantitative one and it is harder to determine the extent to which the researcher influenced the data outcome. Creswell (2008) notes that, qualitative data is generally more time consuming to collect hence may limit the researcher’s scope; for example a sample size may be used due to time and financial constraints.
Conclusion
It is evident that the study of establishing the impact of CSR on Business Performance can take multiple forms although it may still be difficult in establishing CSR’s direct or indirect influence, (Orlitzky, Schmidt and Rynes, 2003). The qualitative research will nonetheless be a plausible way of studying the relationship since it enables the establishment of trustworthiness and the interpretations are credible, dependable and transferable.
References
Creswell, J. W. (2008) Research Design: Qualitative, Quantitative and Mixed Methods
Approaches. Sage Publications.
Kaufmann, M. and Olaru, M. (2012). The Impact of Corporate Social Responsibility on Business
Performance-Can It Be Measured, And If So, How? Retrieved, May 17 2012 from:
http://www.culturaldiplomacy.org/
Orlitzky, M., Schmidt, L. F. and Rynes, S. L. (2003). “Corporate Social and Financial
Performance: A Meta-analysis.” Organization Studies, 24(3): 403-441. Read More
Share:
Tags
Cite this document
(“The Social Constructivist or Interpretivist Lens Essay”, n.d.)
The Social Constructivist or Interpretivist Lens Essay. Retrieved from https://studentshare.org/management/1600551-the-social-constructivist-or-interpretivist-lens

“The Social Constructivist or Interpretivist Lens Essay”, n.d. https://studentshare.org/management/1600551-the-social-constructivist-or-interpretivist-lens.
Comments (0)
Click to create a comment or rate a document

CHECK THESE SAMPLES OF The Social Constructivist or Interpretivist Lens

...’ as explained by social variables; while, social constructionism says that ‘frustration’ is a social construct. It states that individuals are not represented by the personalities that their genes and traits provide them with but with the social traits that society constructs for them. Social constructivism is based upon realism- that is, an external world exists which is different from what we perceive it to be based upon our beliefs and thoughts; while, social constructionism is based on relativism which means that since the external world, if there exists any, is out of our access, hence it should be ignored. Papert actually gave an...
2 Pages(500 words)Essay

Seeing the social world through the lens of social theories

...?Seeing the social world through the lens of social theories Human beings have always reflected on life and its reason of existence. Such thoughts are the basis of religious, philosophical and ideological theories. Thus, the subject of sociology has surfaced as a scientific study of the origin of human society and the behavioral patterns of human beings. Sociology is essentially “a more systematic study of what people do in their daily lives and routines.” (Turner et al, 1998, p.1) Sociology became a popular concept only in the nineteenth century. More than considering it as a new revelation in the field of human reasoning, it was considered as an extension of Enlightenment. The term Enlightenment is concerned with shaping human... ...
7 Pages(1750 words)Essay

... who believe that truth and knowledge is subjective. It has also been marked that anything and everything that has concerns or impact over humans have to be studied through the lens of subjectivism. Meaningfulness to the beliefs has determined knowledge and truth about objects and aspects within environment. Subjectivism suspends the presence of factual information which is measurable. Consequently, any statement which is presented in the form of figure is considered as non-social inquiry for subjectivists (MacDonald, 2009). According to the identified distinctions of subjective and objective perspectives of reality, knowledge, truth and theory, the perspective of current research that is to see the influence of the relationship... method...
9 Pages(2250 words)Research Paper

...? Gendered Lens? On my visit to a local toy store, I observed that there are separate sections for different toys. The purpose behind these segmentation of toys was to separate the toys of girls from those of boys. It seems to be a normal thing to see this kind of segmentation at any local store but if one has a closer look at this particular assignment of toys, one would see the after effects that they cause in the lives of the innocent children. It almost imposes a restriction on their wishes to play with the toys of their own choice without having any gender discrimination. The kind of toys that were placed in the girls’ section of the toy shop comprised of dolls, doll house, pink stuff toys, kitchen set, etc. In the...
4 Pages(1000 words)Research Paper

...rationale, and introspection to conduct research. In this way, the positivist approach sets the mathematical and scientific ground of research while the interpretivist design base the research on contemporary and past empirical evidences. Both approaches effectively address the research question but have a different route and methodology to conduct research. List of References Andrade, A.D., 2009. Interpretive Research Aiming at Theory Building: Adopting and Adapting the Case Study Design. The Qualitative Report, 14(1), pp.42-60. Belk, R.W., 2007. Handbook of Qualitative Research Methods in Marketing. Northampton: Edward Elgar Publishing. Bishop, R.C., 2007. The Philosophy of the Social Sciences: An...
4 Pages(1000 words)Essay

...and addressing misconceptions, thereby promoting the student’s question-asking behaviour. Vygotsky’s Social Constructivism focuses on the social transactions of the mind and its acculturation into a community. The theory considers learning activities as “relevant, meaningful and both product and process oriented” with in learning environments that demonstrate real-world complexities. The social constructivist learning theory encourages group-based learning involving idea sharing, discussion, questioning and the processing of individual learning experiences with in teams. The teacher is only a facilitator, clarifying doubts whenever required. As a comprehensive...
9 Pages(2250 words)Essay

...Fresnel lens Fresnel lens is a thin plastic lens that is flat on one side and has ridges on the other; it is thick inthe middle and reduces in different zones gradually tapers to the edges (Miller & Agnes, 1). The lens was created by Augustin Jean Fresnel in the early 1800s for lighthouse lamps; Fresnel lens capture light from its source enhancing its visibility to considerable distances (Miller & Agnes, 2). In comparison to the conventional lenses, Fresnel lens is much lighter as it reduces the amount of material required. Nowadays, the lens is made of plastic in a bid to reduce its manufacturing cost and its general...
1 Pages(250 words)Lab Report

...Othering: Origin and Development of Othering: Origin and Development The chosen lens for the purpose of this paper is basically a concept called ‘Other’ which is also known as Othering (verb). Philosophers have used the concept of Other in order to refer individuals with opposing perspective in comparison of a cultured view. This paper aims to assess the history of the concept of Other and the manner in which its development occurred over the years. The concept of Other will also be studied in the context of philosophers who have contributed to it by applying it in their respective research. Finally, the manner in which the application of the chosen concept is possible for my topic will also be discussed in the paper. History... is able to...
4 Pages(1000 words)Research Paper

...Lens Discussion  Lens Discussion  A lens is an optical glass or transparent plastics that have the capabilities of transmitting and refractions of lights through a convergence or divergence of its beams. A lens is composed of various elements that have common axis that corrects the beam of lights to a single element. In addition, a lens can be considered as various elements that refracts any form of radiation outside a visual spectrum. However, this research study aims at discussing the historical developments of the lenses, the contributors of its developments, its detailed explanations, and the application of the lens into the current...
4 Pages(1000 words)Research Paper
sponsored ads
Save Your Time for More Important Things
Let us write or edit the essay on your topic "The Social Constructivist or Interpretivist Lens" with a personal 20% discount.
GRAB THE BEST PAPER

Let us find you another Essay on topic The Social Constructivist or Interpretivist Lens for FREE!