Comments (0)
Add to wishlistDelete from wishlist
Cite this document
Summary
It is also referred as a particular theory related to the moral values. Ethics usually pertain to the underlying principles in relation to conduct that is to ascertain…
Download full paperFile format: .doc, available for editing
HIDE THIS PAPERGRAB THE BEST PAPER95.8% of users find it useful 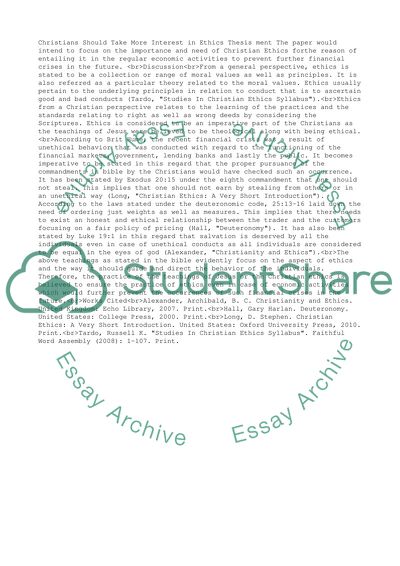 Extract of sample "Christians should take more interest in ethics"

Christians Should Take More Interest in Ethics Thesis ment The paper would intend to focus on the importance and need of Christian Ethics forthe reason of entailing it in the regular economic activities to prevent further financial crises in the future.
Discussion
From a general perspective, ethics is stated to be a collection or range of moral values as well as principles. It is also referred as a particular theory related to the moral values. Ethics usually pertain to the underlying principles in relation to conduct that is to ascertain good and bad conducts (Tardo, “Studies In Christian Ethics Syllabus”).
Ethics from a Christian perspective relates to the learning of the practices and the standards relating to right as well as wrong deeds by considering the Scriptures. Ethics is considered to be an imperative part of the Christians as the teachings of Jesus were believed to be theological along with being ethical.
According to Brit Hume, the recent financial crisis was a result of unethical behavior that was conducted with regard to the functioning of the financial markets, government, lending banks and lastly the public. It becomes imperative to be stated in this regard that the proper pursuance of the commandments in bible by the Christians would have checked such an occurrence. It has been stated by Exodus 20:15 under the eighth commandment that one should not steal. This implies that one should not earn by stealing from others or in an unethical way (Long, “Christian Ethics: A Very Short Introduction”). According to the laws stated under the deuteronomic code, 25:13-16 laid down the need of ordering just weights as well as measures. This implies that there needs to exist an honest and ethical relationship between the trader and the customers focusing on a fair policy of pricing (Hall, “Deuteronomy”). It has also been stated by Luke 19:1 in this regard that salvation is deserved by all the individuals even in case of unethical conducts as all individuals are considered to be equal in the eyes of god (Alexander, “Christianity and Ethics”).
The above teachings as stated in the bible evidently focus on the aspect of ethics and the way it should guide and direct the behavior of the individuals. Therefore, the practice of the teachings of Jesus or the Christian ethics is believed to ensure the practice of ethics even in case of economic activities which would further prevent the occurrences of such financial crises in the future.
Works Cited
Alexander, Archibald, B. C. Christianity and Ethics. United Kingdom: Echo Library, 2007. Print.
Hall, Gary Harlan. Deuteronomy. United States: College Press, 2000. Print.
Long, D. Stephen. Christian Ethics: A Very Short Introduction. United States: Oxford University Press, 2010. Print.
Tardo, Russell K. “Studies In Christian Ethics Syllabus”. Faithful Word Assembly (2008): 1-107. Print. Read More
Share:
Tags
Cite this document
(“Christians should take more interest in ethics Assignment”, n.d.)
Christians should take more interest in ethics Assignment. Retrieved from https://studentshare.org/management/1599421-christians-should-take-more-interest-in-ethics

“Christians Should Take More Interest in Ethics Assignment”, n.d. https://studentshare.org/management/1599421-christians-should-take-more-interest-in-ethics.
Comments (0)
Click to create a comment or rate a document

CHECK THESE SAMPLES OF Christians should take more interest in ethics

Many historians are of the opinion, that the Romans believed that the neglect of the old gods who had made Rome strong, was responsible for the disasters that Rome faced. Is it then safe to assume that the persecutions of Christians, stemmed from a distrust of something alien to the Romans, or were there other causes for these persecutions? The persecutions began slowly but after the middle of the third century, were initiated intensively by some of the Roman emperors. In the beginning, these persecutions were generally a result of personal hostilities between people, where the real issues were hidden behind the excuse of their being of a different faith. However, slowly Christians began to be looked upon as people who took part...
6 Pages(1500 words)Essay

Thus, wealth and/or influence may not be utilized under Jewish Law, to provide an advantage prior to judgements. Jews refer to Leviticus 19:15 for the right way to judge any case. (Spiro, K. 2012) Even the king is not above the law. A king should be a good example for the fulfilment of the law. 1.2 For Christians From the point of view of Catholics (Knight, Kevin 2009), charity is a supernatural virtue given by God for the soul seen whenever a person gives to the poor or needy believing in the Words of Jesus who said in Matthew 25:40 “Truly I tell you, whatever you did for one of the least of these brothers and sisters of mine, you did for me.” For those who have never heard of these biblical words or who do not know Jesus and hi...
6 Pages(1500 words)Essay

Ethics is a term relating with what is right and wrong ethics is relating with morality the moral responsibilities to the society and other stakeholders of the organization. All business firm ultimate aim is to make profit this aim is relating with their economic performance such as profit, growth, revenue etc. But the economic performance of an organization is highly depends on their social performance that are the responsibilities to the society employees and other stake holders. Employees plays very important role in a business firm good employee welfare and employee employer relationship is essential for an organizations success.
Conflict of interest is deals with person or group of person’s interest of benefits is entire...
5 Pages(1250 words)Essay

... policy terrain. (Fratianni, Savona, Kriton 7). The recent global financial crisis and the resulting international economic meltdown are due to inefficient corporate governance procedure and rules. The unprecedented bailouts and financial packages in USA, UK and other nations have eaten away trillion of taxpayers’ money and have yet to stimulate or energize the concerned economy and the capital markets. The general observation is that offering subsidies to distressed companies does not yield any desired results, whereas better corporate governance and accountability should enhance the global economy. It is suggested to prevent recurrences of recent global financial crisis, it is suggested to establish an enforceable and effective global...
7 Pages(1750 words)Essay

... are often misquoted. Given that the modern church uses these same scripture to reject homosexuality within the church, it is therefore evident that the early church interpreted these bible passages in a different manner and hence the reason why they were more tolerant towards gays14. Early Christian Eschatology The function of the Jewish apocalyptic thought and its eschatological consequences are usually disregarded wherever the teachings of Jesus and early Christianity come up. As it emerges, Jesus and the early Christians while not necessarily emulating their apocalyptic forbearers and colleagues were largely influenced by them and helped in defining both apocalyptic and messianic thought in interesting and unique ways. One thing...
14 Pages(3500 words)Essay

...Early Christians Introduction Islam spread faster than Christianity did in the early ages. The reasons for the difference were inthe uniqueness of the structures of the two religions. Christianity was among the earliest religions in the world. Islam on the other hand came into being later at a time when the Roman Catholic had its 69th pope. Despite its late entrance, the structure of Islam enhanced the aggressive nature with which it spread. The Arab empire spread rapidly after the death of Prophet Muhammad through systematic caliphates. The caliphates occupied large geographical areas extending from the Middle East to Northern Africa. The creation of Islamic territories through the expansion of the Arab Empire enhanced the rapid spread...
1 Pages(250 words)Essay

.... What is the point Sen is making about libertarianism with the story of Ali, Donna, and Charles? As Sen says, these story share an imperative principle called ‘rights do not establish a shared ordering’ (LeFevre 45-50). However whilst or welfarists this implies ruling out rights from the ethically pertinent aspects of situations, for the philosopher who takes rights critically this denotes that they trump other (shared)aims; this is to mean that no other objective or ethics may offset a right. In other terms, taking rights critically implies that they must be perceived as principles that have lexical precedence in a hypothesis that entails principles other than rights and specific priority regulations (LeFevre 45-50...
4 Pages(1000 words)Coursework
sponsored ads
Save Your Time for More Important Things
Let us write or edit the assignment on your topic "Christians should take more interest in ethics" with a personal 20% discount.
GRAB THE BEST PAPER

Let us find you another Assignment on topic Christians should take more interest in ethics for FREE!