Collaboration and conflict management within groups and teams - Essay Example

Comments (0)
Add to wishlistDelete from wishlist
Cite this document
Summary
453). To make cross-border alliances and merger and acquisition (M&A) effective, collaboration, and conflict management within groups and teams is necessary to increase the efficiency of a…
Download full paperFile format: .doc, available for editing
HIDE THIS PAPERGRAB THE BEST PAPER96.9% of users find it useful 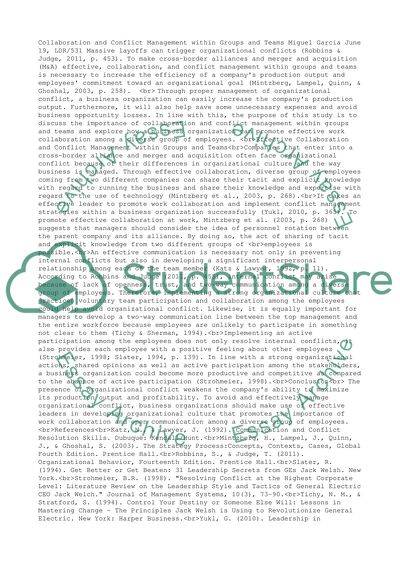 Extract of sample "Collaboration and conflict management within groups and teams"

Collaboration and Conflict Management within Groups and Teams Miguel Garcia June 19, LDR/531 Massive layoffs can trigger organizational conflicts (Robbins & Judge, 2011, p. 453). To make cross-border alliances and merger and acquisition (M&A) effective, collaboration, and conflict management within groups and teams is necessary to increase the efficiency of a company’s production output and employees’ commitment toward an organizational goal (Mintzberg, Lampel, Quinn, & Ghoshal, 2003, p. 258).
Through proper management of organizational conflict, a business organization can easily increase the company’s production output. Furthermore, it will also help save some unnecessary expenses and avoid business opportunity losses. In line with this, the purpose of this study is to discuss the importance of collaboration and conflict management within groups and teams and explore how a business organization can promote effective work collaboration among a diverse group of employees.
Effective Collaboration and Conflict Management within Groups and Teams
Companies that enter into a cross-border alliance and merger and acquisition often face organizational conflict because of their differences in organizational culture and the way business is managed. Through effective collaboration, diverse group of employees coming from two different companies can share their tacit and explicit knowledge with regard to running the business and share their knowledge and expertise with regard to the use of technology (Mintzberg et al., 2003, p. 268).
It takes an effective leader to promote work collaboration and implement conflict management strategies within a business organization successfully (Yukl, 2010, p. 365). To promote effective collaboration at work, Mintzberg et al. (2003, p. 268) suggests that managers should consider the idea of personnel rotation between the parent company and its alliance. By doing so, the act of sharing of tacit and explicit knowledge from two different groups of
employees is possible.
An effective communication is necessary not only in preventing internal conflicts but also in developing a significant interpersonal relationship among each of the team member (Katz & Lawyer, 1992, p. 11). According to Robbins and Judge (2011, p. 455), internal conflict may arise because of lack of openness, trust, and two-way communication among a diverse group of employees. Therefore, implementing a strong organizational culture that practices voluntary team participation and collaboration among the employees could help avoid organizational conflict. Likewise, it is equally important for managers to develop a two-way communication line between the top management and the entire workforce because employees are unlikely to participate in something not clear to them (Tichy & Sherman, 1994).
Implementing an active participation among the employees does not only resolve internal conflicts, it also provides each employee with a positive feeling about other employees (Strohmeier, 1998; Slater, 1994, p. 139). In line with a strong organizational actions, shared opinions as well as active participation among the stakeholders, a business organization could become more productive and competitive as compared to the absence of active participation (Strohmeier, 1998).
Conclusion
The presence of organizational conflict weakens the company’s ability to maximize its production output and profitability. To avoid and effectively manage organizational conflict, business organizations should make use of effective leaders in developing organizational culture that promotes the importance of work collaboration and open communication among a diverse group of employees.
References
Katz, N., & Lawyer, J. (1992). Communication and Conflict Resolution Skills. Dubuque: Kendall/Hunt.
Mintzberg, H., Lampel, J., Quinn, J., & Ghoshal, S. (2003). The Strategy Process:Concepts, Contexts, Cases, Global Fourth Edition. Prentice Hall.
Robbins, S., & Judge, T. (2011). Organizational Behavior, Fourteenth Edition. Prentice Hall.
Slater, R. (1994). Get Better or Get Beaten: 31 Leadership Secrets from GEs Jack Welsh. New York.
Strohmeier, B.R. (1998). "Resolving Conflict at the Highest Corporate Level: Literature Review on the Leadership Style and Tactics of General Electric CEO Jack Welch." Journal of Management Systems, 10(3), 73-90.
Tichy, N. M., & Stratford, S. (1994). Control Your Destiny or Someone Else Will: Lessons in Mastering Change - The Principles Jack Welsh is Using to Revolutionize General Electric. New York: Harper Business.
Yukl, G. (2010). Leadership in Organizations, Seventh Edition. Prentice Hall. Read More
Share:
Tags
Cite this document
(“Collaboration and conflict management within groups and teams Essay”, n.d.)
Collaboration and conflict management within groups and teams Essay. Retrieved from https://studentshare.org/management/1598815-collaboration-and-conflict-management-within-groups-and-teams

“Collaboration and Conflict Management Within Groups and Teams Essay”, n.d. https://studentshare.org/management/1598815-collaboration-and-conflict-management-within-groups-and-teams.
Comments (0)
Click to create a comment or rate a document

...allows the members of the group to resolve all decisions, and autocratic leadership where the leader delegates to the workers on what to perform. Any group member could be a leader if he takes actions, which aid the group in its task completion and the maintenance of relationships within the group that are effectively collaborative. Leadership skills can be acquired by anyone and are specific to a certain group at a certain time (Robbins, 2009 p7). The leader has to possess diagnostic skills that allow him to be aware of the need for a given function in the team or group, as well as...
10 Pages(2500 words)Essay

...: leadership skills, problem solving and decision making. Moreover, I shall inculcate the Mary Brown scenario and relate it to the specific three theories discussed. Additionally, I shall deliver an eventual concise summary on the Belbin team roles. Moreover, I have critically explored the above-mentioned areas, with regard to thorough studies I have conducted and which I have cited within the text. Groups and Teams Apparently, all teams are groups but not all groups are teams. Definitely, a group is any given number of entities that are considered as a complete unit. Moreover, a...
10 Pages(2500 words)Essay

...goal generates mutual and equitable satisfaction (Roodt & Odendaal, 2009). When it comes to management, managers are given a ‘group’ of workers who usually come from different backgrounds (Hardingham, 1998; Roodt & Odendaal, 2009). Such a manager is mandated to use the given group of workers to achieve particular performance targets. While particular performance target is the goal, inevitably, each worker must work towards its achievement. Therefore, formation of a team or teams of workers is absolutely the primary step. The responsible manager therefore has a role to form a team in this...
3 Pages(750 words)Essay

...A was the sharing of roles and responsibilities. Some members neglected their duties, and ended up overloading others. To resolve this issue, the leader should form a committee within the group to breakdown the tasks and delegate to members, group agreement is more acceptable than individual decision. Group B The main issue was the setting up of norms; there was no clear guideline to govern the members. Norm setting is very important in any group. A well set norm increases the chances of commitment, hard work, and appreciation of team work. With the existence of conflicts within group B,...
4 Pages(1000 words)Essay

... complicated roles within their capabilities. In that way, each and every member could have contributed to the success of the project without any conflicts. These resolutions would elevate the level of involvement of the group members in the project activities and hence they would be effective. Work cited Borkman, Thomasina. Case Studies of Two Poorly Functioning Teams. GMU and Virtual School, 17 Dec. 1996. Web. 29 Dec. 2013. http://virtualschool.edu/98c/Soci305/Soci305Thomasina.html... as team A and team B (Borkman). For the purpose of this assignment, the two poorly functioning groups or teams will also be denoted as team A and team B....
4 Pages(1000 words)Essay

...not formed by the organizations. Anybody can become a part of the informal group. Friendship groups, reference groups and interest groups are all informal groups. Even though the informal groups are not formed to achieve organizational goals they can have a strong positive or negative influence on the working of an organization. For example, they can either talk about how to develop a production method or how to create shortcuts that would eventually endanger quality. (Group Dynamics, n.d.) Good team behavior requires development and supervising. It is imperative to ascertain the appropriate role of each...
5 Pages(1250 words)Essay

...Groups and Teams Recognizing that putting and letting individual employees work together can bring about higher productivity and efficiency, business organizations have began building groups to tackle specific tasks. However, it should be noted that not all groups within the context of a firm succeeds from merely doing this. Drawing from real world examples, some groups often fail to become a high performance team. Companies often realize that putting individual employees to work together is not sufficient to create a productive team. Business organizations must work and put significant effort in order...
3 Pages(750 words)Essay

...to shift to the other competitors who produce similar products but of a greater quality for the same price. Packaging department has recorded decreasing productivity over the past couple of years due to their negative work patterns. Treetop’s overall costs continue to rise due to added overtime bills (particularly in the packaging department) and inventory costs and stock damage Management is frustrated because they realize that the packaging department is capable of effective and efficient production yet there continues to be a backlog in spite of the added overtime. Treetop’s cost competitiveness is suffering because of the overtime costs and decrease in productivity The activity within the packaging...
1 Pages(250 words)Case Study

...Tools, 2012). Team members become agitated, develop attitude problems, and enter into dysfunctional conflicts. These team members avoid talking to one another and if they have to, there is always a risk that the conversation might end up in an argument. Effective collaboration and conflict management within groups and teams Effective collaboration within teams is more difficult to achieve as compared to the groups. The leader of the group can generate a memo emphasizing upon the need to take a certain...
2 Pages(500 words)Essay

...to comply with a completed project within the indicated time frame. Team B The conflict that was manifested in Team B was perceived by members of the subgroup as inconsequential and emanted only in terms of the need to prod non-performing members to deliver. Again, avoiding active and direct confrontation, the members of the subgroup, exemplify characteristics of confict which are consisent with Tuckman’s second stage of group development, exhibiting “wide swings in members’ behavior based on emerging issues of competition and hostilities. Because of the discomfort generated during this stage, some members may remain completely silent while others...
4 Pages(1000 words)Essay
sponsored ads
Save Your Time for More Important Things
Let us write or edit the essay on your topic "Collaboration and conflict management within groups and teams" with a personal 20% discount.
GRAB THE BEST PAPER

Let us find you another Essay on topic Collaboration and conflict management within groups and teams for FREE!