Comments (0)
Add to wishlistDelete from wishlist
Cite this document
Summary
Apparently, these top performers drive the organization to provide the highest benefits and profits for the organization necessitating the high cash…
Download full paperFile format: .doc, available for editing
HIDE THIS PAPERGRAB THE BEST PAPER98.8% of users find it useful 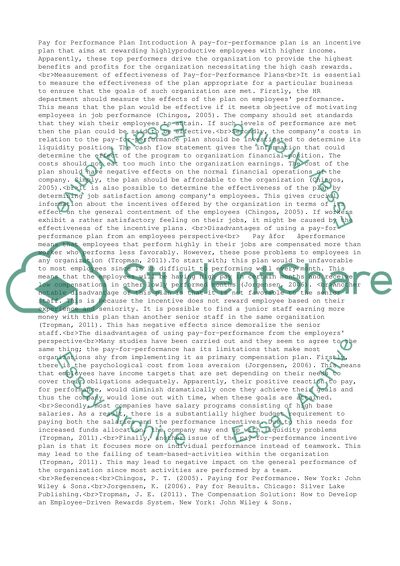 Pay for Performance Plan Introduction A pay-for-performance plan is an incentive plan that aims at rewarding highlyproductive employees with higher income. Apparently, these top performers drive the organization to provide the highest benefits and profits for the organization necessitating the high cash rewards.
Measurement of effectiveness of Pay-for-Performance Plans
It is essential to measure the effectiveness of the plan appropriate for a particular business to ensure that the goals of such organization are met. Firstly, the HR department should measure the effects of the plan on employees’ performance. This means that the plan would be effective if it meets objective of motivating employees in job performance (Chingos, 2005). The company should set standards that they wish their employees to attain. If such levels of performance are met then the plan could be said to be effective.
Secondly, the company’s costs in relation to the pay-for-performance plan should be investigated to determine its liquidity position. The cash flow statement gives the information that could determine the effect of the program to organization financial position. The costs should not eat too much into the organization earnings. The cost of the plan should have negative effects on the normal financial operations of the company. Simply, the plan should be affordable to the organization (Chingos, 2005).
It is also possible to determine the effectiveness of the plan by determining job satisfaction among company’s employees. This gives crucial information about the incentives offered by the organization in terms of its effect on the general contentment of the employees (Chingos, 2005). If workers exhibit a rather satisfactory feeling on their jobs, it might be caused by the effectiveness of the incentive plans.
Disadvantages of using a pay-for-performance plan from an employees perspective
Pay –for –performance means that employees that perform highly in their jobs are compensated more than worker who performs less favorably. However, these pose problems to employees in any organization (Tropman, 2011).To start with; this plan would be unfavorable to most employees since it is difficult to performing well every month. This means that the employees will be having high pay in certain months and receive low compensations in other lowly performed months (Jorgensen, 2006).
Another notable disadvantage of this plan is that it is not favorable to the senior staff. This is because the incentive does not reward employee based on their experience and seniority. It is possible to find a junior staff earning more money with this plan than another senior staff in the same organization (Tropman, 2011). This has negative effects since demoralize the senior staff.
The disadvantages of using pay-for-performance from the employers’ perspective
Many studies have been carried out and they seem to agree to the same thing; the pay-for-performance has its limitations that make most organizations shy from implementing it as primary compensation plan. Firstly, there is the psychological cost from loss aversion (Jorgensen, 2006). This means that employees have income targets that are set depending on their needs to cover their obligations adequately. Apparently, their positive reaction to pay, for performance, would diminish dramatically once they achieve their goals and thus the company would lose out with time, when these goals are attained.
Secondly, most companies have salary programs consisting of high base salaries. As a result, there is a substantially higher budget requirement to paying both the salaries and the performance incentives. Due to this needs for increased funds allocation, the company may end up with liquidity problems (Tropman, 2011).
Finally, another issue of the pay-for-performance incentive plan is that it focuses more on individual performance instead of teamwork. This may lead to the failing of team-based-activities within the organization (Tropman, 2011). This may lead to negative impact on the general performance of the organization since most activities are performed by a team.
References:
Chingos, P. T. (2005). Paying for Performance. New York: John Wiley & Sons.
Jorgensen, K. (2006). Pay for Results. Chicago: Silver Lake Publishing.
Tropman, J. E. (2011). The Compensation Solution: How to Develop an Employee-Driven Rewards System. New York: John Wiley & Sons. Read More
Share:
Tags
Cite this document
(“HR Headline: Pay for Performance in Public Schools Remains Essay”, n.d.)
HR Headline: Pay for Performance in Public Schools Remains Essay. Retrieved from https://studentshare.org/management/1595777-hr-headline-pay-for-performance-in-public-schools-remains-controversial

...?People (HR) Performance Table of Contents Overview of the Case 3 Main Issues Related to HR 3 Solutions to the Problems 5 References 7 Overview of the Case The major task of the manager is to manage, evaluate, support, motivate and influence the performance of the people in the organisation (Carnegie Mellon, 2010). Cuero Ltd is the UK based company that has been involved in the manufacturing of shoes of ladies, gentlemen and children. The company was formed by Frank Wood in the early half of the twentieth century. The major aims of the project are to evaluate the performance of the employees in the organisation and suggest the means of solution for the...
4 Pages(1000 words)Essay

...Public Schools vs. Private Schools Introductions There have been debates that have highlighted the issue of the sector of schools as a fundamental consideration in the academic achievements of students. In 2004, there was a report that contended that charter or private schools had students who performed lower than their counterparts in public schools. This report was very fiercely contested. There were numerous reports that were subsequently released to show that students from such schools actually performed better (Lubienski & Lubienski, p. 2). In addition to these, the...
3 Pages(750 words)Essay

...for performance can be measured with surveys aims at findings about employee satisfaction and motivation levels (Gomez-Mejia, 2010). Furthermore, their on job performances and achievement of their goals may also help in knowing that whether or not certain pay for performance program is effective. Lastly, financial numbers and ratios, such as revenues, sales, expenses, profitability, operating income, profit margins, return on investment and others remain as major tool to measure their effectiveness. If any pay for performance plan is motivating employees but not adding to the financial success of the company then it is...
2 Pages(500 words)Research Paper

...that “a significant number of public school districts in the United States began considering merit-based pay as an alternative or supplement to the single salary schedule” (Besharov, 2007, p. 912). Although the applications of theories of merit pay are in the field of management and administration, Schulz and Tanguay (2006) have pointed out that the theoretical foundations of merit pay are also in psychology and economics. Given a possibly considerable support for merit pay, what does recent literature say on merit pay and performance? What are some of the findings of empirical studies for last five...
9 Pages(2250 words)Book Report/Review

...BONIFACE MUTINDA ORDER NO:126402 28TH MAY 2006 Although the relationship between pay and performance is complex and problematic performancepay remains of central interest to employers as a human resorting strategy aimed at improving organizational performance. Comment critically on the above statement. Performance pay is a system of rewarding employees which is based on perceived out put often without clear measurement formula but which depends on the discretion of the supervisor or the line manager concerning the employee. Compared to other pay system performance pay is more complex and more difficult to implement. A critical look at performance pay however points to the fact that this method utilizes only performance... and...
15 Pages(3750 words)Essay

...HR Pay scale and benefits programs for HR Professional All organizations must face up to the challenge f how to evaluate, utilize and develop the skills and abilities f their employees to ensure that organizational are achieved, and also to ensure that individuals gain as much satisfaction as possible from their jobs while making effective contributions. As competition in many markets becomes more intense and global in nature, the importance f performance appraisal has been recognizing as a key element f strategic human resource management (Anderson, 1993). Performance appraisal may be defined by Dessler (1997) as any procedure that involves: Setting...
4 Pages(1000 words)Essay

...Public Sector Pay Cuts Public Sector Pay Cuts Introduction It is suspected that the Chancellor, George Osborne in conjunction with the treasury arranges to lower pay rates for some public sector employees in the U.K. This has evoked a lot of concern among workers unions, and government and the public sector workers. They regard this proposal as being foolish, imminent and likely to lead to potential unintended effects. This idea has not been well embraced by most of the people. As a result, the government, the public sector and the unions have prominently expressed their criticism and dissatisfaction...
4 Pages(1000 words)Essay

Performance Based Pay as a Motivational Tool

...could lead to higher employee retention(Dee and Wyckoff 26), presumably because of the job satisfaction that employees derive from these schemes. This was the verdict of a 2013 study by the National Bureau of Economic Research. The study sought to investigate IMPACT, the rather controversial system used by the District of Columbia Public Schools to evaluate and compensate teachers. The system stands out in that it proposes unusually high, individually-targeted teacher incentives. The incentives are pegged to the performance of the teacher as measured using data obtained from various sources as opposed student academic achievement alone. Employee retention would lead to...
8 Pages(2000 words)Essay
sponsored ads
Save Your Time for More Important Things
Let us write or edit the essay on your topic "HR Headline: Pay for Performance in Public Schools Remains Controversial" with a personal 20% discount.
GRAB THE BEST PAPER

Let us find you another Essay on topic HR Headline: Pay for Performance in Public Schools Remains Controversial for FREE!