Comments (0)
Add to wishlistDelete from wishlist
Cite this document
Summary
The fast changing needs and desires of people around the globe is forcing organisations to be more interested in various dimensions of management and appraisal of the employees to have a competitive edge. Thus, the role of Human Resource Development (HRD) managers have become…
Download full paperFile format: .doc, available for editing
HIDE THIS PAPERGRAB THE BEST PAPER93.8% of users find it useful 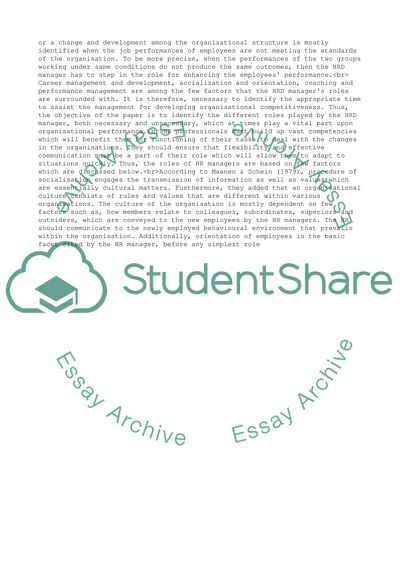 Download file to see previous pages or a change and development among the organisational structure is mostly identified when the job performances of employees are not meeting the standards of the organisation. To be more precise, when the performances of the two groups working under same conditions do not produce the same outcomes, then the HRD manager has to step in the role for enhancing the employees’ performance.
Career management and development, socialization and orientation, coaching and performance management are among the few factors that the HRD manager’s roles are surrounded with. It is therefore, necessary to identify the appropriate time to assist the management for developing organisational competitiveness. Thus, the objective of the paper is to identify the different roles played by the HRD manager, both necessary and unnecessary, which at times play a vital part upon organisational performance.
HR professionals must build up vast competencies which will benefit them for functioning of their tasks to deal with the changes in the organisations. They should ensure that flexibility and effective communication must be a part of their role which will allow them to adapt to situations quickly. Thus, the roles of HR managers are based on few factors which are discussed below.
According to Maanen & Schein (1979), procedure of socialisation engages the transmission of information as well as values which are essentially cultural matters. Furthermore, they added that an organisational culture consists of rules and values that are different within various organisations. The culture of the organisation is mostly dependent on few factors such as, how members relate to colleagues, subordinates, superiors and outsiders, which are conveyed to the new employees by the HR managers. The HR should communicate to the newly employed behavioural environment that prevails within the organisation. Additionally, orientation of employees is the basic facet cited by the HR manager, before any simplest role ...Download file to see next pagesRead More
Share:
Tags
Cite this document
(“Critically discuss the role of an HRD manager in promoting Essay”, n.d.)
Critically discuss the role of an HRD manager in promoting Essay. Retrieved from https://studentshare.org/management/1595775-critically-discuss-the-role-of-an-hrd-manager-in-promoting-organizational-competitiveness-within-a-slowly-recovering-economy

“Critically Discuss the Role of an HRD Manager in Promoting Essay”, n.d. https://studentshare.org/management/1595775-critically-discuss-the-role-of-an-hrd-manager-in-promoting-organizational-competitiveness-within-a-slowly-recovering-economy.
Comments (0)
Click to create a comment or rate a document

...?Organizational Development in HRD The Fourwinds Marina, located Lake Monroe in Bloomington, Indiana, is considered as one of the most extensive and complete Marinas of its type in the United States. The main focus area of Fourwinds Marina is to offer the residents of Indiana an apt place to store their boats, as well as rent and sell their boats all round the year at an profitable and reasonable cost. However, the management at Marina is going through tough time, with six different managers being appointed and terminated in the last six years. The main issue being, most of the managers lacked work experience regarding the Marina business, as they worked...
2 Pages(500 words)Essay

Changing Role of Cinematographers in the Age of DigitalImagery

Role of the vocational case manager within rehabilitation

... been affected by illness or injury to return to work by assessing their skills, aptitudes, interests and physical capability. The process of assessment is carried out using interviews to find out their strengths and weaknesses, their coping capabilities, energy levels. Tests can be conducted to assess the depth of the person's skills and capabilities. The case manager will look into the person's work history to find out if there is anything amiss there and if they have a fine work record, the case will be dealt with accordingly. The Case Manager's role is highly critical because it helps a person to re-orient themselves in their work place as they recover from a traumatic event. The role of the case manager can be summarized... ...
12 Pages(3000 words)Essay

...﻿ Organizational Development in HRD C&S is a grocery company that was established by two former grocery wholesaler workers, Israel Cohen and his business partner, Abraham Siegel in 1918 (McKenney, 1998). Through innovation and attention to customer service, as well as cost reduction implementations, the company grew consistently to its present state. Despite most of its competitor turning to retailers, the company resisted the attempt and continued to take advantage of the efficient technology and processes, to continue with distribution and wholesale operations. C&S consistently gained large customers, and the issue was no longer searching for customers, but looking for ways to satisfy such customers,...
3 Pages(750 words)Assignment

Case study of HRD within an organization

...action can be taken. Therefore, it can be argued that the HRD constitutes the engine of an organization in that it plays the central role in ensuring effective coordination of the employee. In order to expound more on the HRD and acquire some essential lessons, we focus on a case study of HRD within the Coca-Cola Company. Organizational structure The Coca-Cola Company operates a hierarchical organizational structure where staff members are grouped in terms of ranks. The sequence of command has several stages since the company bases its operation in many countries around the world. The company has more than 200 offices...
5 Pages(1250 words)Case Study

Role Of Manager And Organizational Theory

...(Jones, 2001). Consequently, the primary role of the organizational theory in a firm is to set guidelines and standards for what the managers are expected to do in an organization. In a suitable world, the conflict role of the theory is never an issue since the role managers think they should play and those that employees think they need to play is always in a sync proportion. Heineken Company poses to be one of the greatest organization in the universe. The management of the company has contributed to the success of the company. The management of the company has set the role of the...
1 Pages(250 words)Coursework
sponsored ads
Save Your Time for More Important Things
Let us write or edit the essay on your topic "Critically discuss the role of an HRD manager in promoting organizational competitiveness within a slowly recovering economy" with a personal 20% discount.
GRAB THE BEST PAPER

Let us find you another Essay on topic Critically discuss the role of an HRD manager in promoting organizational competitiveness within a slowly recovering economy for FREE!