Comments (0)
Add to wishlistDelete from wishlist
Cite this document
Summary
According to Yardley Para. 4, most of the negative impacts are associated with environmental impacts and loss of jobs. On the other hand, the positive impacts are associated with its…
Download full paperFile format: .doc, available for editing
HIDE THIS PAPERGRAB THE BEST PAPER99% of users find it useful 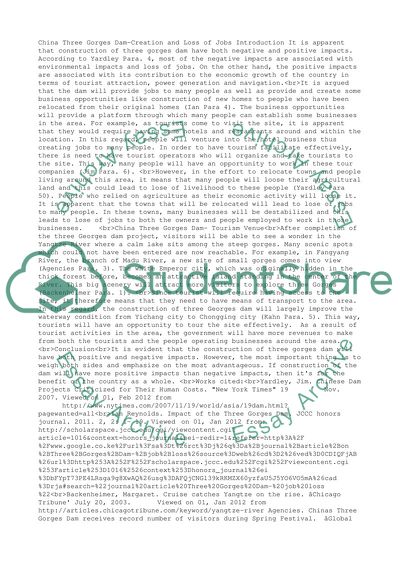 China Three Gorges Dam-Creation and Loss of Jobs Introduction It is apparent that construction of three gorges dam have both negative and positive impacts. According to Yardley Para. 4, most of the negative impacts are associated with environmental impacts and loss of jobs. On the other hand, the positive impacts are associated with its contribution to the economic growth of the country in terms of tourist attraction, power generation and navigation.
It is argued that the dam will provide jobs to many people as well as provide and create some business opportunities like construction of new homes to people who have been relocated from their original homes (Ian Para 4). The business opportunities will provide a platform through which many people can establish some businesses in the area. For example, as tourists come to visit the site, it is apparent that they would require having some hotels and restaurants around and within the location. In this regard, people will venture into the hotel business thus creating jobs to many people. In order to have tourism facilitate effectively, there is need to have tourist operators who will organize and take tourists to the site. This way, many people will have an opportunity to work in these tour companies (Jim Para. 6).
However, in the effort to relocate towns and people living around this area, it means that many people will loose their agricultural land and this could lead to lose of livelihood to these people (Yardley Para 50). People who relied on agriculture as their economic activity will loose it. It is apparent that the towns that will be relocated will lead to lose of jobs to many people. In these towns, many businesses will be destabilized and this leads to lose of jobs to both the owners and people employed to work in those businesses.
China Three Gorges Dam- Tourism Venue
After completion of the three Georges dam project, visitors will be able to see a wonder in the Yangtze River where a calm lake sits among the steep gorges. Many scenic spots which could not have been entered are now reachable. For example, in Fangyang River, the branch of Madu River, a new site of small gorges comes into view (Agencies Para. 3). The white Emperor city, which was originally hidden in the thick forest before, becomes an attractive island standing in the center of the River. This big scenery will attract more visitors to explore three Gorges (Backenheimer Para. 1).
Since tourist will require having access to the site, it therefore means that they need to have means of transport to the area. In this regard, the construction of three Georges dam will largely improve the waterway condition from Yichang city to Chongging city (Kahn Para. 5). This way, tourists will have an opportunity to tour the site effectively. As a result of tourist activities in the area, the government will have more revenues to make from both the tourists and the people operating businesses around the area.
Conclusion
It is evident that the construction of three gorges dam will have both positive and negative impacts. However, the most important thing is to weigh both sides and emphasize on the most advantageous. If construction of the dam will have more positive impacts than negative impacts, then it’s for the benefit of the country as a whole.
Works cited:
Yardley, Jim. Chinese Dam Projects Criticized for Their Human Costs. "New York Times" 19 Nov. 2007. Viewed on 01, Feb 2012 from http://www.nytimes.com/2007/11/19/world/asia/19dam.html?pagewanted=all
Ian Reynolds. Impact of the Three Gorges Dam. JCCC honors journal. 2011. 2, 2: 1- 19. Viewed on 01, Jan 2012 from: http://scholarspace.jccc.edu/cgi/viewcontent.cgi?article=1016&context=honors_journal&sei-redir=1&referer=http%3A%2F%2Fwww.google.co.ke%2Furl%3Fsa%3Dt%26rct%3Dj%26q%3Da%2Bjournal%2Barticle%2Bon%2BThree%2BGorges%2BDam-%2Bjob%2Bloss%26source%3Dweb%26cd%3D2%26ved%3D0CDIQFjAB%26url%3Dhttp%253A%252F%252Fscholarspace.jccc.edu%252Fcgi%252Fviewcontent.cgi%253Farticle%253D1016%2526context%253Dhonors_journal%26ei%3DbFYpT73PE4LRsga9g8XwAQ%26usg%3DAFQjCNGl39kRKMZX60yzfaU5J5YO6VO5mA%26cad%3Drja#search=%22journal%20article%20Three%20Gorges%20Dam-%20job%20loss%22
Backenheimer, Margaret. Cruise catches Yangtze on the rise. ‘Chicago Tribune’ July 20, 2003. Viewed on 01, Jan 2012 from http://articles.chicagotribune.com/keyword/yangtze-river Agencies. Chinas Three Gorges Dam receives record number of visitors during Spring Festival. ‘Global Times’ Wednesday, February 01, 2012. Viewed on 01, Jan 2012 from http://www.globaltimes.cn/NEWS/tabid/99/ID/693908/Chinas-Three-Gorges-Dam- receives-record-number-of-visitors-during-Spring-Festival.aspx
Kahn, Joseph. The Other Great Wall. ‘The New York Times’ September 24, 2006. Viewed on 01, Jan 2012 from http://travel.nytimes.com/2006/09/24/travel/tmagazine/24yangtze.html
Jim Yardley. Chinese Dam Projects Criticized for Their Human Costs. ‘The New York Times’ November 19, 2007. Viewed on 01, Jan 2012 from http://www.nytimes.com/2007/11/19/world/asia/19dam.html?pagewanted=all Read More
Share:
Tags
Cite this document
(“Three Gorges Dam- Tourism Venue and Creation and Loss of Jobs Research Paper”, n.d.)
Three Gorges Dam- Tourism Venue and Creation and Loss of Jobs Research Paper. Retrieved from https://studentshare.org/management/1588541-three-gorges-dam-tourism-venue-and-creation-and-loss-of-jobs

...? MSc (Management) Project Management Assignment Assignment The Three Gorges Program, China: Re-building Natural Resources Executive Summary The implementation of the Three Gorges Dam in China is one which shows several successes and failures. The main objective was to control the flooding of the river while building the largest hydroelectric power dam that could be used in China. The implementation of the overall project was successful with specific needs. However, there were several downfalls that were a part of the building of the river, specifically through gaps in the implementation of the project. This research study will examine how the project progression and maintenance led to gaps in the successful finish of the project... and is...
15 Pages(3750 words)Essay

...substantiate the arguments of Dr. Benjamin Fong Chao. To date, more than 1.3 million people have been moved to make way for the Three Gorges Dam. The government promised land to farmers, jobs for city dwellers, and cash compensation for all dam ousters. However, China doesn’t have spare land, and in the face of increasing privatization, the government no longer creates jobs (Three Gorges Dam: The Cost of Power, p.1) The above statistics clearly show that the availability of land in China is decreasing day by day. Landslide and soil erosion caused by three...
10 Pages(2500 words)Research Paper

...is not seasonal, that is food can be produced even during the dry season. It is also true to say that many Americans lively hood largely depends on irrigation farming through creation of employment and providing food. Remediating the Gorge dam can be seen to have long term health and economic benefits. A well fed nation implies a healthy state. Healthy people have a longer life expectancy. Ignoring the dam on the other hand means that the dam water can only be used for a short while until the sediments and other pollutants take over. Removing the dam means that no irrigation can take place in that area and farming will solely depend on...
7 Pages(1750 words)Research Paper

The Three Gorges Dam: the life of forced migrant and their Marginalization

...abandoned these people once they were compensated while many are yet to be compensated fully (Andrews & Xin 247). Conclusion The Three Gorges Dam project has resulted in humanitarian crisis in China. Forced migration goes against human rights. The Chinese government and other stakeholders including the media have ignored the plight of the forced migrants and only concentrated on the positive side of the project. The migrants are faced with high unemployment rates, cultural disorientation and loss of identity. Social amenities for this group have not been in line with other parts of the larger community (Jackson & Sleigh 7). Works Cited Andrews-Speed, Philip, Xin Mang....
10 Pages(2500 words)Essay

...Benefits of the Three Gorges Dam There are several benefits that are as a result of the Three Gorges Project that extends from one area to the other. The project is geared towards the elevation of the China’s economic prosperity by providing cheaper and reliable source of energy for the peoples’ use in various sectors of the economy. The higher demand for electricity in China is readily met with the advent of this project; this is because the project is able to produce a huge amount of energy that can be comfortably shared in various sectors of the economy (Kite, 2011). There has been an extensive power transmission of the electricity from the project to...
2 Pages(500 words)Essay

...Three Gorges Dam Project The Three Gorges Dam Project is one of the most monumental projects in the 5000 years of Chinese history besides the Great Wall. The construction of the dam started on 14th of December 1994 and the project apparently cost an incredible amount of monetary, environmental, and human resources and finally got completed on 20th may 2006.This project was faced by one of the biggest controversies in China during its construction since it touched on sensitive issues ranging from aspects of population relocation, environmental damage, archeological heritage destruction to the economical benefits, clean...
10 Pages(2500 words)Essay

The economic benefits and environmental problems of the Three Gorges Dam

... kilowatts amount of power that is environmental friendly annually. Thirdly, for navigation allowance along the river Yangtze both up and downstream. The dam will help thetransportation of goods and products from Chongqing to Shanghai. This will help improve the country’s economy (Curley 29). Finally, it was for tourism attraction. The Three Gorges Dam, being the largest in the world would attract many tourists in the country. Foreign exchange will earn the country profits and boost the economy. The benefits and the disadvantages of the dam will be discussed in details in the following part of this assignment. Economic benefits of the Three Gorges Dam The building of the dam has significance to the economy of the country... consistent...
20 Pages(5000 words)Research Paper
sponsored ads
Save Your Time for More Important Things
Let us write or edit the research paper on your topic "Three Gorges Dam- Tourism Venue and Creation and Loss of Jobs" with a personal 20% discount.
GRAB THE BEST PAPER

Let us find you another Research Paper on topic Three Gorges Dam- Tourism Venue and Creation and Loss of Jobs for FREE!