Comments (0)
Add to wishlistDelete from wishlist
Cite this document
Summary
Leaders’ qualities like integrity, vision or focus, consistency and connectedness with people can be spelt as the guiding principles amidst contradicting or opposing challenges such as…
Download full paperFile format: .doc, available for editing
HIDE THIS PAPERGRAB THE BEST PAPER93.7% of users find it useful 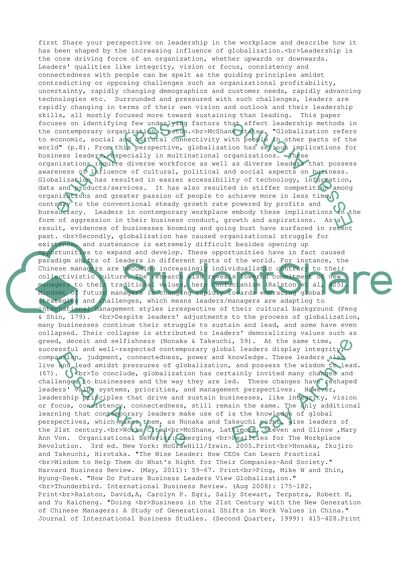 first Share your perspective on leadership in the workplace and describe how it has been shaped by the increasing influence of globalization.
Leadership is the core driving force of an organization, whether upwards or downwards. Leaders’ qualities like integrity, vision or focus, consistency and connectedness with people can be spelt as the guiding principles amidst contradicting or opposing challenges such as organizational profitability, uncertainty, rapidly changing demographics and customer needs, rapidly advancing technologies etc. Surrounded and pressured with such challenges, leaders are rapidly changing in terms of their own vision and outlook and their leadership skills, all mostly focused more toward sustaining than leading. This paper focuses on identifying few underlying factors that affect leadership methods in the contemporary organizational setup.
McShane states, “Globalization refers to economic, social and cultural connectivity with people in other parts of the world” (p.8). From this perspective, globalization has serious implications for business leaders, especially in multinational organizations. These organizations require diverse workforce as well as diverse leaders that possess awareness of influence of cultural, political and social aspects on business. Globalization has resulted in easier accessibility of technology, information, data and products/services. It has also resulted in stiffer competition among organizations and greater passion of people to achieve more in less time, contrary to the conventional steady growth rate powered by profits and bureaucracy. Leaders in contemporary workplace embody these implications in the form of aggression in their business conduct, growth and aspirations. As a result, evidences of businesses booming and going bust have surfaced in recent past.
Secondly, globalization has caused organizational struggle for existence, and sustenance is extremely difficult besides opening up opportunities to expand and develop. These opportunities have in fact caused paradigm shifts of leaders in different parts of the world. For instance, the Chinese managers are becoming increasingly individualistic contrary to their collectivistic culture. The research also reveals lowered commitment of new managers to their traditional values, here Confucianism (Ralston et al, 425). Mindset of future managers is changing rapidly towards embracing global strategies and challenges, which means leaders/managers are adapting to international management styles irrespective of their cultural background (Peng & Shin, 179).
Despite leaders’ adjustments to the process of globalization, many businesses continue their struggle to sustain and lead, and some have even collapsed. Their collapse is attributed to leaders’ demoralizing values such as greed, deceit and selfishness (Nonaka & Takeuchi, 59). At the same time, successful and well-respected contemporary global leaders display integrity, compassion, judgment, connectedness, power and knowledge. These leaders also live and lead amidst pressures of globalization, and possess the wisdom to lead. (67).
To conclude, globalization has certainly invited many changes and challenges to businesses and the way they are led. These changes have reshaped leaders’ value systems, priorities, and management perspectives. However, leadership principles that drive and sustain businesses, like integrity, vision or focus, consistency, connectedness, still remain the same. The only additional learning that contemporary leaders make use of is the knowledge of global perspectives, which makes them, as Nonaka and Takeuchi point, wise leaders of the 21st century.
Works Cited
McShane, Lattimore, Steven and Glinow ,Mary Ann Von. Organizational Behavior: Emerging
Realities for The Workplace Revolution. 3rd ed. New York: McGrawHill/Irwin. 2005.Print
Nonaka, Ikujiro and Takeuchi, Hirotaka. “The Wise Leader: How CEOs Can Learn Practical
Wisdom to Help Them do What’s Right for Their Companies-And Society.” Harvard Business Review. (May, 2011): 59-67. Print
Ping, Mike W and Shin, Hyung-Deok. “How Do Future Business Leaders View Globalization.”
Thunderbird. International Business Review. (Aug 2008): 175-182. Print
Ralston, David,A, Carolyn P. Egri, Sally Stewart, Terpstra, Robert H, and Yu Kaicheng. “Doing
Business in the 21st Century with the New Generation of Chinese Managers: A Study of Generational Shifts in Work Values in China.” Journal of International Business Studies. (Second Quarter, 1999): 415-428.Print Read More
Share:
Tags
Cite this document
(“Share your perspective on leadership in the workplace and describe how Essay”, n.d.)
Share your perspective on leadership in the workplace and describe how Essay. Retrieved from https://studentshare.org/management/1586339-share-your-perspective-on-leadership-in-the-workplace-and-describe-how-it-has-been-shaped-by-the-increasing-influence-of-globalization

...Apple Inc. Increasing Corporate Market Share Introduction Apple Inc. is committed towards being the market leader in personal computing and digital music products and services. To achieve its business goals, the company has endeavored to provide quality for its customers within businesses, institutions and government agencies. This has been made possible through creativity and innovativeness of its computer hardware and software in addition to computer peripherals, internet services and digital music devices. Regardless of the company’s business success, it is faced with challenges of achieving a greater share in its corporate market....
5 Pages(1250 words)Research Paper

...﻿Increasing Your Personal Effectiveness In the world, different people have different habits that define their social standing. Indeed, scholars argue that habits are the defining factors of humans. In psychology, habits refer to the routine behaviors repeated regularly and often occur subconsciously. Experts and other researchers reiterate that habitual behavior occurs unnoticed to the individual displaying it, as the individual does not necessarily need to engage in self-assessment and analysis when performing routine tasks. Essentially, a habit may be good or bad. Interestingly, every person has a particular habit he or she would like to change or improve uponi. This reflection paper...
8 Pages(2000 words)Research Paper

The rhetoric and reality of the post-bureaucratic organisation: a case study from the public services

...through parents meetings, email enquiries etc. Assistant Head Teacher: Surveys, Website, Parentview website. 9. When introducing a new programme (new incentives for students) is parent’s views taken into consideration? Head Teacher: Sometimes. I can cite examples of how major school improvement aims have been influenced by parent survey results. However, on other occasions the school just acts as it sees best. Assistant Head Teacher: Yes. 10. If parents disagree with a programme/initiative, who has the final decision? Do you agree with this process? Head Teacher: HT has final say. It is very rare for ‘parents to disagree’. A small vociferous minority may...
16 Pages(4000 words)Dissertation

Leadership in The Workplace

...and coercive power, all of which increase the capacity of a leader to influence values, attitudes and behaviors of followers. Tuuli (2010) cites two kinds of power in a workplace: position power derived from a given rank and personal power derived from the consideration of a leader as being knowledgeable and likeable by the followers. While the former includes coercive, reward and legitimate power, the latter encompasses expert and referent power. The topic on leadership has been under investigation for many decades. As observed by Dulewicz and Higgs (2005), the approaches to leadership in the period before the 1980s...
8 Pages(2000 words)Research Paper

How Technology in the Workplace has shaped Outsourcing and Globalization

...How Technology Changed The Work Process and Gave Rise to Business Outsourcing Introduction In the view of some political and economic scholars, the transfiguration of the workplace and business processes through technology actually started way back when rich countries used their technological advantage to colonize the poorer countries. Colonization is thus considered the precursor of globalization because the colonizers spread their advanced knowledge and capabilities throughout the less developed world the same way technology-driven globalization operates. The colonizers euphemistically described the process as an effort to disseminate civilization or Christianity, but the real objective, according to Thurow & Lessard (2002... apropos...
12 Pages(3000 words)Essay

...on the study of characteristics of the leaders and the manner in which they behave. The impact of leadership behavior on organizational performance has been studied extensively since the past four decades, by practitioners and academics alike (Cannella and Rowe, 1995; Giambatista, 2004). This is mainly because of the widespread belief, that the leadership behavior displayed by the leaders in organizations is regarded, by some researchers as crucial to achievement of organizational goals and in motivating the employees to enhance productivity (Berson et al., 2001; Zacharatos et al., 2000). This paper seeks to analyze, explore and investigate the behavioral...
4 Pages(1000 words)Essay

...a clear insight into the research methodology and the rationale behind the approach that has been chosen. The next chapter will deal with the literature review of study and will touch upon in depth topics relating to culture and the differentiation of UK and Pakistan’s cultural dimensions. Chapter 2 Literature Review 2.1 Introduction The previous chapter has provided a clear insight into the research. This chapter aims at discussing the literature that has been developed over the years and the various theories that have been developed which relate to culture within an organisation. The first stream of literature discusses and...
60 Pages(15000 words)Essay

...﻿Globalization Perspective Case Study For a company with operations in a “difficulty country,” what would be the advantages and disadvantages of hiring managers from that country? Working in a hardship area is not easy for many managers especially those who hail from developed countries like the U.S. A hardship country is mainly characterized by high risk of diseases, crime, heavy pollution, poor health services, and inadequate infrastructure. As such, it would be advantageous to employee a manager who hails from the hardship country because they are familiar with the cultural of the place. Therefore, such managers would find it easy working with the people of such a country because he or she understands the culture and language... in a...
3 Pages(750 words)Research Paper

...of railroads and bring the country to prosperity. In other words, it would not be wise to reject the leading role of the government in the process of development of the social environment. In other words, why would people want to get rid of something that has proven to be effective? Another example is taken from the current political world. The author suggests that when both far left and right argue the necessity of a new revolution, they fail to see that they are faced with a dilemma that none of them is able to solve. For example, governmental surveillance is needed to protect people from terrorism, but if we accept it we should also accept that it violates some of the basic rights of the people. Works cited Gutting,...
1 Pages(250 words)Assignment

...by BF Skinner was based on a systematic method of research in which the theorist has clearly identified how changes in observable behavior take place (Ashford 6). This theory is quite easy to implement as well as verify when as a student an individual is indulged in research. Behavioral perspective of psychology is even interesting because it focuses on behavior that can be seen or is exhibited by an individual. This is an interesting way of studying the psychology of an individual because it is quite easy to obtain as well as analyze data regarding observable behavior. Studying psychology with observable behavior allows a student to obtain quantifiable data that can be used to obtain...
2 Pages(500 words)Personal Statement
sponsored ads
Save Your Time for More Important Things
Let us write or edit the essay on your topic "Share your perspective on leadership in the workplace and describe how it has been shaped by the increasing influence of globalization" with a personal 20% discount.
GRAB THE BEST PAPER

Let us find you another Essay on topic Share your perspective on leadership in the workplace and describe how it has been shaped by the increasing influence of globalization for FREE!