Comments (1)
Add to wishlistDelete from wishlist
Cite this document
Summary
Every organization wants to satisfy their customers amidst the increased competition and demand. Majority of contemporary firms have their opted for information systems that would enhance effective and efficient customer satisfaction. An example of a firm that continues to pose great challenges to management is Starbucks…
Download full paperFile format: .doc, available for editing
HIDE THIS PAPERGRAB THE BEST PAPER98.8% of users find it useful 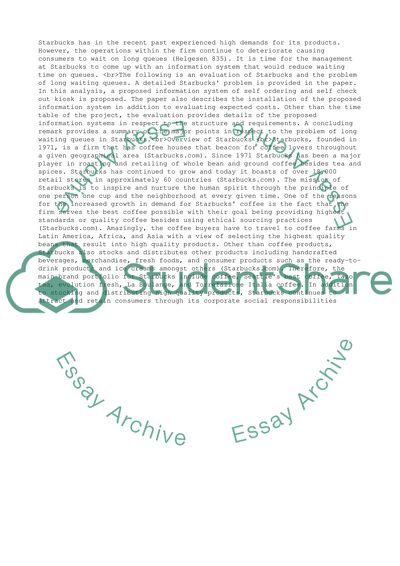 Extract of sample "Solutions to the long waiting queues in Starbucks"

Download file to see previous pages Starbucks has in the recent past experienced high demands for its products. However, the operations within the firm continue to deteriorate causing consumers to wait on long queues (Helgesen 835). It is time for the management at Starbucks to come up with an information system that would reduce waiting time on queues.
The following is an evaluation of Starbucks and the problem of long waiting queues. A detailed Starbucks’ problem is provided in the paper. In this analysis, a proposed information system of self ordering and self check out kiosk is proposed. The paper also describes the installation of the proposed information system in addition to evaluating expected costs. Other than the time table of the project, the evaluation provides details of the proposed information systems in respect to the structure and requirements. A concluding remark provides a summary of the major points in respect to the problem of long waiting queues in Starbucks.
Overview of Starbucks
Starbucks, founded in 1971, is a firm that has coffee houses that beacon for coffee lovers throughout a given geographical area (Starbucks.com). Since 1971 Starbucks has been a major player in roasting and retailing of whole bean and ground coffee besides tea and spices. Starbucks has continued to grow and today it boasts of over 18,000 retail stores in approximately 60 countries (Starbucks.com). The mission of Starbucks is to inspire and nurture the human spirit through the principle of one person one cup and the neighborhood at every given time. One of the reasons for the increased growth in demand for Starbucks’ coffee is the fact that the firm serves the best coffee possible with their goal being providing highest standards or quality coffee besides using ethical sourcing practices (Starbucks.com). Amazingly, the coffee buyers have to travel to coffee farms in Latin America, Africa, and Asia with a view of selecting the highest quality beans that result into high quality products. Other than coffee products, Starbucks also stocks and distributes other products including handcrafted beverages, merchandise, fresh foods, and consumer products such as the ready-to-drink products and ice creams amongst others (Starbucks.com). Therefore, the main brand portfolio for Starbucks include coffee, Seattle’s best coffee, Tazo tea, evolution fresh, La Boulange, and Torrefazione Italia coffee. In addition to stocking and distributing high quality products, Starbucks continues to attract and retain consumers through its corporate social responsibilities ...Download file to see next pagesRead More
Share:
Tags
Cite this document
(“Solutions to the long waiting queues in Starbucks Term Paper”, n.d.)
Solutions to the long waiting queues in Starbucks Term Paper. Retrieved from https://studentshare.org/management/1403082-identify-a-problem-within-any-organization-and

“Solutions to the Long Waiting Queues in Starbucks Term Paper”, n.d. https://studentshare.org/management/1403082-identify-a-problem-within-any-organization-and.
Comments (1)
Click to create a comment or rate a document

ma
maggiorosemary added comment 1 year ago
Student rated this paper as
Great paper! Used it to complete an assignment for a management course. It was easy as ABC, for the first time in my life.

In this connection, Beverly J. Davis (2007), an associate professor at the College of Technology in Lafayette and Kokomo says of Starbucks "The founder expanded his Seattle coffee shop into a huge enterprise and made it appealing to the average American. He was able to recognize that cafés were a strong trend in Europe and was able to pick up on the weak signal that Americans, despite their fast-paced lifestyle, were eager to embrace the idea of slowing down enough to visit a coffee shop, bookstore or library to connect with other people ” Davis further says in order for a fad to become a trend, it must appeal to the mainstream, be accessible to all, be easily understandable to the average person, be easy to obtain an...
10 Pages(2500 words)Case Study

Nutrition is pivotal for growth and progression of normal life and also a disease-free life. It is imperative for everybody and much more important in the case of children and infants because they are in their maximum growth stage. Malnutrition at this stage can have serious repercussions for the...
10 Pages(2500 words)Coursework
sponsored ads
Save Your Time for More Important Things
Let us write or edit the term paper on your topic "Solutions to the long waiting queues in Starbucks" with a personal 20% discount.
GRAB THE BEST PAPER

Let us find you another Term Paper on topic Solutions to the long waiting queues in Starbucks for FREE!