Comments (0)
Add to wishlistDelete from wishlist
Cite this document
Summary
Name: University: Course: Tutor: Date: Conflict resolution- mediation 2 Introduction Mediation is a conciliatory process in which a neutral third party intervenes in a conflict between two disputants with the sole goal of providing them with support to reach a mutual agreement…
Download full paperFile format: .doc, available for editing
HIDE THIS PAPERGRAB THE BEST PAPER95.7% of users find it useful 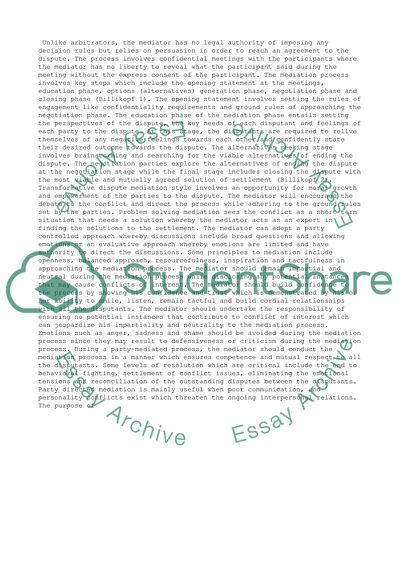 Download file to see previous pages Unlike arbitrators, the mediator has no legal authority of imposing any decision rules but relies on persuasion in order to reach an agreement to the dispute. The process involves confidential meetings with the participants where the mediator has no liberty to reveal what the participant said during the meeting without the express consent of the participant. The mediation process involves key steps which include the opening statement at the meetings, education phase, options (alternatives) generation phase, negotiation phase and closing phase (Billikopf 1). The opening statement involves setting the rules of engagement like confidentiality requirements and ground rules of approaching the negotiation phase. The education phase of the mediation phase entails setting the perspectives of the dispute, the key needs of each disputant and feelings of each party to the dispute. At this stage, the disputants are required to relive themselves of any negative feelings towards each other and confidently state their desired outcome towards the dispute. The alternatives seeking stage involves brainstorming and searching for the viable alternatives of ending the dispute. The negotiation parties explore the alternatives of ending the dispute at the negotiation stage while the final stage includes closing the dispute with the most viable and mutually agreed solution of settlement (Billikopf 2). Transformative dispute mediation style involves an opportunity for moral growth and empowerment of the parties to the dispute. The mediator will encourage the debate to the conflict and direct the process while adhering to the ground rules set by the parties. Problem solving mediation sees the conflict as a short term situation that needs a solution whereby the mediator acts as an expert in finding the solutions to the settlement. The mediator can adopt a party controlled approach whereby discussions include broad questions and allowing emotions or an evaluative approach whereby emotions are limited and have authority to direct the discussions. Some principles to mediation include openness, balanced approach, resourcefulness, inspiration and tactfulness in approaching the mediation process. The mediator should remain impartial and neutral during the mediation process while disclosing any potential instances that may cause conflicts of interest. The mediator should build confidence to the process by showing his confidence and trust which is demonstrated by his or her ability to smile, listen, remain tactful and build cordial relationships with all the disputants. The mediator should undertake the responsibility of ensuring no potential instances that contribute to conflict of interest which can jeopardize his impartiality and neutrality to the mediation process. Emotions such as anger, sadness and shame should be avoided during the mediation process since they may result to defensiveness or criticism during the mediation process. During a party-mediated process, the mediator should conduct the mediation process in a manner which ensures competence and mutual respect to all the disputants. Some levels of resolution which are critical include the end to behavioral fighting, settlement of conflict issues, eliminating the emotional tensions and reconciliation of the outstanding disputes between the disputants. Party directed mediation is mainly useful when poor communication, and personality conflicts exist which threaten the ongoing interpersonal relations. The purpose of ...Download file to see next pagesRead More
Share:
Tags
Cite this document
(“Conflict Resolution - Mediation 2 Essay Example | Topics and Well Written Essays - 2500 words”, n.d.)
Retrieved from https://studentshare.org/management/1400210-conflict-resolution-mediation
(Conflict Resolution - Mediation 2 Essay Example | Topics and Well Written Essays - 2500 Words)
https://studentshare.org/management/1400210-conflict-resolution-mediation.
“Conflict Resolution - Mediation 2 Essay Example | Topics and Well Written Essays - 2500 Words”, n.d. https://studentshare.org/management/1400210-conflict-resolution-mediation.
Comments (0)
Click to create a comment or rate a document

While Community law is likely to prevail since all the locations are within Europe, there is however the question of which Court will bet be able to try the issues involved in the respective cases that each of the four parties will be able to file, i.e, Homecraft against the supplier of parts in Italy and assembler of parts for the saws and the Switzerland company that has tested the drill bits as well as the company in Norway that manufactures the bits. In the case of Homecraft, the cause of action that will arise is that of breach of contract through the supply of defensive merchandise.
In the case of Jack, there is a claim that arises in tort because he has suffered harm as a result of the defective parts in the saw and he...
11 Pages(2750 words)Case Study

“Visions in Conflict” has a threefold purpose. The first of these is to express much of the good work being done in the field of conflict resolution and peacebuilding around the world. This is especially relevant in the areas of acknowledgment and understanding of the “other” (including interfaith dialogue); communication through conflict and forgiveness. Second, this compilation aims to open up the field in ord...
8 Pages(2000 words)Book Report/Review

The foundation of the Jewish State is the...
6 Pages(1500 words)Term Paper

When the Copernican theory of planetary motion became well known in 1543 through the publication of his book, De revolutionibus, the geocentric model of the universe as implied in the Bible received a great setback. There were also questions raised about the notion that God created the earth and universe in seven days. The scriptures also speak in a plain manner that the earth is stationary, but science proved that the earth was rotating around the sun. To reconcile science and religion became a Herculean task for the faithful and several approaches were adopted to find out a coherent explanation.
“Grant us space from our meditations on the secret recesses of your law, and do not lock the gate to us as we knock. It is n...
22 Pages(5500 words)Assignment
sponsored ads
Save Your Time for More Important Things
Let us write or edit the essay on your topic "Conflict Resolution - Mediation 2" with a personal 20% discount.
GRAB THE BEST PAPER

Let us find you another Essay on topic Conflict Resolution - Mediation 2 for FREE!