Comments (0)
Add to wishlistDelete from wishlist
Cite this document
Summary
According to the report by Randall Morck, Bernard Yeung and Minyuan Zhao (2007), the growth of outward investment (FDI), from developing and transition economies has greatly increased. China is one of the countries that are practicing the outward foreign investment. This means…
Download full paperFile format: .doc, available for editing
HIDE THIS PAPERGRAB THE BEST PAPER92.7% of users find it useful 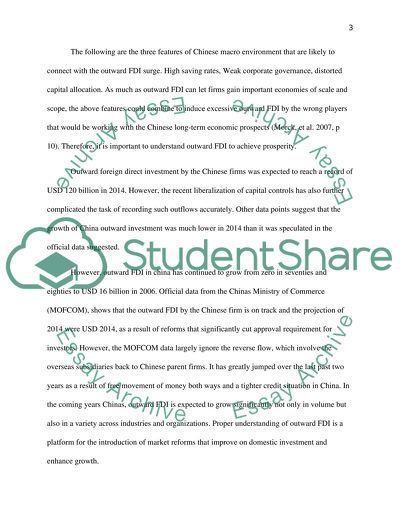 Why Chinese governments stimulate outward FDI Why Chinese governments stimulate outward FDI? According to the report byRandall Morck, Bernard Yeung and Minyuan Zhao (2007), the growth of outward investment (FDI), from developing and transition economies has greatly increased. China is one of the countries that are practicing the outward foreign investment. This means that china is injecting funds into and enterprise that in a different country the text discusses on the main targets of the FDI and the interest of the chine managers. The Chinese managers see FDI as a way of upgrading technology and augment earnings (Morck, et al. 2007). With the outward FDI, china will grow sustainably as well as different players will gain prominence.
China has continued to stimulate outward FDI, with the lifting of restrictions on Chinese firm operations overseas on the new law on foreign exchange. For instance, there is no need to obtain exchange based on a risk assessment. This is expected to increase Chinas Outward FDI. As much as the countries may have difficulties in navigating towards the process, China may opt to go to the developing countries because of initiatives employed by these countries. Recently China is focusing on Africa, to increase the outward FDI since it is currently relatively small than the size of its economy (Ilhéu, 2010). There are other top host countries of great interest to china, which include Hong Kong and the Caribbean tax haven. That constantly account for about 70% of the flow. These counties are often used by multinational firms to store wealth as a result of their confidentiality to the foreign investors. Focusing on these countries by Chinese firm may also be one of the ways of hiding wealth from tax authorities, other authorities or the public shareholders (Morck, et al. 2007).
The following are the three features of Chinese macro environment that are likely to connect with the outward FDI surge. High saving rates, Weak corporate governance, distorted capital allocation. As much as outward FDI can let firms gain important economies of scale and scope, the above features could combine to induce excessive outward FDI by the wrong players that would be working with the Chinese long-term economic prospects (Morck, et al. 2007, p 10). Therefore, it is important to understand outward FDI to achieve prosperity.
Outward foreign direct investment by the Chinese firms was expected to reach a record of USD 120 billion in 2014. However, the recent liberalization of capital controls has also further complicated the task of recording such outflows accurately. Other data points suggest that the growth of China outward investment was much lower in 2014 than it was speculated in the official data suggested.
However, outward FDI in china has continued to grow from zero in seventies and eighties to USD 16 billion in 2006. Official data from the Chinas Ministry of Commerce (MOFCOM), shows that the outward FDI by the Chinese firm is on track and the projection of 2014 were USD 2014, as a result of reforms that significantly cut approval requirement for investors. However, the MOFCOM data largely ignore the reverse flow, which involve the overseas subsidiaries back to Chinese parent firms. It has greatly jumped over the last past two years as a result of free movement of money both ways and a tighter credit situation in China. In the coming years Chinas, outward FDI is expected to grow significantly not only in volume but also in a variety across industries and organizations. Proper understanding of outward FDI is a platform for the introduction of market reforms that improve on domestic investment and enhance growth.
References
Berning, S. and Holtbrügge, D. 2012. Chinese outward foreign direct investment—a challenge for traditional internationalization theories?. J Betriebswirtsch, 62(3-4), pp.169-224.
Collins, D. 2013. The BRIC states and outward foreign direct investment. Oxford: Oxford University Press
Ilhéu, F. 2010. Chinese Outward Foreign Direct Investment. International Journal of Asian Business and Information Management, 1(4), pp.43-56.
Morck, R., Yeung, B. and Zhao, M. 2007. Perspectives on Chinas Outward Foreign Direct Investment.pp. 3-29.
Robins, F. 2013. The uniqueness of Chinese outward foreign direct investment. Asian Bus Manage, 12(5), pp.525-537. Read More
Share:
Tags
Cite this document
(“Why Chinese governments stimulate outward FDI Essay”, n.d.)
Retrieved from https://studentshare.org/macro-microeconomics/1683204-why-chinese-governments-stimulate-outward-fdi

CHECK THESE SAMPLES OF Why Chinese governments stimulate outward FDI

...and Demerits FDI: Benefits to the home country FDI helps a country improve its balance of payment and thus bring economic advantages. The multinational company by directly investing enterprises abroad can make use of raw materials from the host country and therefore home country can save its raw materials. It more over creates revenues to the government. The investment of E-Walky in China will certainly help US improves its balance of payment and generates revenues for the government. The home country also will be benefited from improved political and international relations. As Hill (2009) noted, the home country will benefit from employment effects as well as when the...
5 Pages(1250 words)Essay

An empirical study on FDI, inward or outward

...?An empirical study on FDI, inward or outward Table of Contents Introduction 3 FDI Performance of Saudi Arabia 4 Comparison of Saudi Arabia’s FDI Profile 6 Factors influencing FDI Flows in Saudi Arabia 7 Government Policies controlling FDI Flows 9 Evaluation of the Present Scenario 9 Conclusion 11 References 11 Bibliography 12 Introduction Foreign Direct Investment plays a very significant role behind the growth and economic performance of a nation. FDI could actually be synonymised with capital flows and could be further distinguished into two categories according to the purposes which they serve. Borrowed credits change ownership hands after being lent out while the second category including investments or transaction payments... are...
10 Pages(2500 words)Essay

...is that the high incidence of Ponzi schemes and other financial-market aberrations in the region was no mere unconventional behaviour, but fostered by the combination of restrictive monetary policies, a lack of market regulation, large capital inflows, and weak governments. These features have indeed been, to varying extends, typical of transition economies. Opportunistic Climate for FDI Commonly, as far as we know, financial incentives are used and in particular via the mechanism of taxation. However, experience has shown that such incentives play a limited role compared to other factors, including the legal framework; political and macroeconomic stability; growth in purchasing power; level of training...
22 Pages(5500 words)Dissertation

...to this, the nation has also become a demanding source of outward FDI. This has been as a result of stimulation of outward FDI, high prices of goods, and the rapid economic growth within China. At the beginning of the twenty first century, the nation introduced a go-global policy, which has been very influential in making economic decisions. Through China’s outward FDI, partner factories and enterprises have been established in markets outside China, consequently meeting local customer preferences by making customized products. Government restrictions in the use of foreign currency in the case of...
3 Pages(750 words)Essay

...in China has originated from other areas of Asia excluding Japan, Hong Kong which is a self governing region of china has the largest record, however the dominance of Hong Kong is illusory in that much of the FDI is from elsewhere, in fact the stock listed as Hong Kong source FDI in China is just Chinese domestic investment round tripped through Hong Kong. Additional FDI in China listed as Hong Kong in origin is in actuality from a variety of western countries and Taiwan that is sited in China via intermediaries. Unfortunately, published records do not exist to point out exactly how much FDI in China that is supposedly from Hong Kong is...
10 Pages(2500 words)Essay

...would be examining the following details along with the reason for why FDI occurs usually in MNCs: 1. Why investment decisions are made 2. FDI vitality with respect to theories in competitive markets. 3. The reason for the success of FDI in Asian countries and threat to Western nations. 4. What are the consequences of new policies in FDI 5. Which countries have benefited from FDI policies In reality, many international investors are seemingly small and weak. For instance, multinational firms originating from developing countries have become a visible force in the world of FDI (Wells, 1983) Small...
10 Pages(2500 words)Essay

..., as shown by the negative coefficients on HERT. Monopolistic industries such as tobacco processing, ferrous metal processing and smelting, petroleum processing and coking are difficult for foreign investors to enter because of institutional and policy restrictions imposed by the Chinese Government, and market barriers. Foreign direct investment in China has been a hot research topic since the early 1990s. However, insufficient attention has been paid to the issue of industrial distribution of FDI. The present study illustrates the importance of industrial agglomeration and localized business linkage in attracting foreign investment. This study finds that up to 2004 the major...
40 Pages(10000 words)Coursework

...XXXXXXX Number: XXXXXXX XXXXXXXX XXXXXXX XXXXXXX XX – XX – Stimulate Speech Speech Speaker Notes: Hard Work is a term we all use every day. Thomas Jefferson explains, “Im a great believer in luck and I find the harder I work, the more I have of it” (Finest Quotes). Good Morning/ Afternoon, my name is XXXXXX and I will be speaking about one of the most important aspect of life Hard Work. According to me hard work refers to the things that challenge us, things that put up a major challenge and are not easy to achieve. I feel hard work is essential as it helps the individual get through the hard times in life more effectively. Also, it allows the individuals to be more motivated. I will be discussing these in detail...
6 Pages(1500 words)Essay

..., Singapore, South Korea and Japan. 5. Another characteristic refers to the outward FDI of China which is financed by joint capital. The government has very strict policies when it comes to controlling foreign exchange; as a result Chinese overseas investment gets transformed in to joint capital ventures. Since the 21st century, this joint venture has showed a growth of almost 65%. 6. Upon identifying the characteristic of the Chinese FDI, it becomes clear that it is indeed different from any other FDI and China has been playing very smart by following its Go Global strategy. Manufacturing sector is quite popular and...
23 Pages(5750 words)Research Paper
sponsored ads
Save Your Time for More Important Things
Let us write or edit the essay on your topic "Why Chinese governments stimulate outward FDI" with a personal 20% discount.
GRAB THE BEST PAPER

Let us find you another Essay on topic Why Chinese governments stimulate outward FDI for FREE!