Comments (0)
Add to wishlist Delete from wishlist
Cite this document
Summary
The current paper "UK Economic Policies" is purposed to explain that the economic policies adopted by UK can be dissected into two parts – before and after the 1990s. Broadly speaking, the plans undertaken in the 1990s were a part of the liberalization move…
Download full paper File format: .doc, available for editing
HIDE THIS PAPERGRAB THE BEST PAPER96.7% of users find it useful 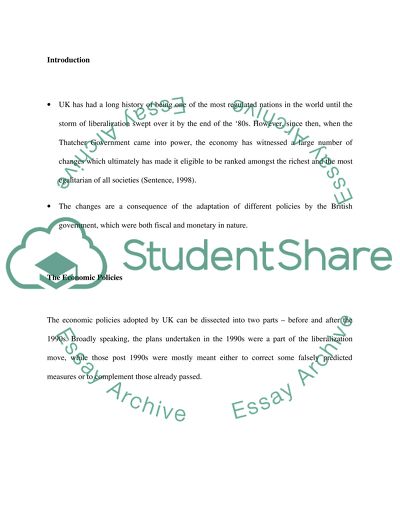 UK Economic Policies Table of Contents Introduction 3 The Economic Policies 3 Economic Policy Measures undertaken on or before the 1990s. 4 Economic Policy Measures undertaken post 1990s. 5
Conclusion and Recommendations 5
Reference 7
Introduction
UK has had a long history of being one of the most regulated nations in the world until the storm of liberalization swept over it by the end of the ‘80s. However, since then, when the Thatcher Government came into power, the economy has witnessed a large number of changes which ultimately has made it eligible to be ranked amongst the richest and the most egalitarian of all societies (Sentence, 1998).
The changes are a consequence of the adaptation of different policies by the British government, which were both fiscal and monetary in nature.
The Economic Policies
The economic policies adopted by UK can be dissected into two parts – before and after the 1990s. Broadly speaking, the plans undertaken in the 1990s were a part of the liberalization move, while those post 1990s were mostly meant either to correct some falsely predicted measures or to complement those already passed.
Economic Policy Measures undertaken on or before the 1990s.
Privatization
Mainly aimed to tackle the stagflation that gulped the nation during the 1970s and to prevent further such developments. However has been criticised by a number of economists.
Also enabled the revision of labour laws so as to reduce the power of the labour union and assign more power to the company.
Moreover, the competitive spirit that the step would instil among the producers will help the nation to achieve a comparatively advantageous position.
Most relevant sectors, other than the postal system, were privatized.
The scheme was preceded by a number of failures and required a lot of effort from the then Prime Minister, Margaret Thatcher, before it finally achieved success almost a decade later. (Clarke & Morgan, 2006)
Reduction in unemployment benefits combined with a modification of tax laws that might act as an incentive for higher production and thus an improved GDP position (Wagnur, 2000).
Modification of the education system in the country and providing maximum financial coverage to the students.
New pension plans so as to shift the burden from the state to the individuals.
Introduction of pay-as-you-go scheme in the occupational structure, where the individual has to purchase and become a part of some pension benefit scheme (Taylor-Gooby, 2006).
Increased housing ownership due to introduction of buyer-side subsidies (Quilgars & Jones, 2007).
Capital account convertibility that helped the inflow foreign investments (Capie, Wood & Sensenbrenner, February 18, 2003).
Restructuring the national health insurance scheme – as a part of government expenditure financed from tax revenues (Luck, Pocock & Tricker, 2000).
Settlement of minimum wage.
Measures for a regular inspection of the conditions of the national hospitals.
Economic Policy Measures undertaken post 1990s.
Conclusion and Recommendations
How the nation has fared after it was liberalized and what were the consequences of the policies it adopted at that time (International Monetary Funds, 1993).
The policies which the nation had adopted later to counter or correct the consequences of the economic policies implemented during liberalization (Smith & Grant, 2003; Palma, 2003).
How have those policies embraced as corrective measures fared? (Good, 2000; Cecchetti, Genberg, Lipskey & Wadhwani, 2001)
Reference
1. Capie, F., Wood, G. & Sensenbrenner, G. (2003). Foreign Investment in the UK. City University, London.
[A detailed account of an increase in the amount of foreign investment in UK and the mobility of funds post-liberalization]
2. Card, D., Blundell, R. & Freeman, R. B. (2004): ‘Seeking a premier economy’, CentrePiece, Winter 2004, vol.3 (1), pp 28 – 31.
[An overview of the topic – a concise discussion about the plans and policies of the British government post 1980s as well as a criticism of the same].

Economic growth can be defined as a measure of a rise in the Growth Domestic Product (GDP). It is for this reason that we determine whether a country is undergoing inflation or growth and the cost of living of a particular country. To better understand the definition, the term GDP should be made clear. The latter gives a sum total of the production of a given country for the year in question. The total sum comes from adding the government, business and citizen’s expenditure and deducting it from all exports of the country (McCombie and Anthony 43). This will give a general idea of how the market is performing against other international trading markets. The current economic level as explained earlier can be attributed to a number...
6 Pages (1500 words) Essay

Such happened after the People’s Bank of China (PBOC) permeated 36 billion yuan (or HK$45.2 billion) to be fed to its banking system via bills and forward bond repurchase agreements which motivated short term loans in the market that was scaled up last month (Reuters, 2013, p. 1; The Economist, 2013, p. 1). Banking sector current condition While they are hopeful that the money market rates will be normalized by July, but economists began to note that the bond repurchase in seven days slumped to 69 bps to 4.76 % since June, the zenith period for liquidity squeeze (Reuters, 2013, p. 1). The overnight repossession rate dropped 63 bps to 3.79 % and the 14-day rate lurched nearly 100 bps to 5.09% based on reports (Reuters, 2013, p. 1;...
8 Pages (2000 words) Essay

The UK economy has been going through a recession and the goverment has employed expansionary fiscal and monetary policies to address this problem. Use economic theory to explain how these policies work and evaluate their effectiveness

...UK Government’s expansionary fiscal and monetary policy mix Introduction Expansionary fiscal and monetary policy measures are adopted by governments in response to recessions or economic downturns. A recession, defined as two consecutive quarters of negative Gross Domestic Product (GDP) growth in a year, can be partially or wholly reversed by using a combination of macroeconomic measures or solutions such as fiscal or/and monetary policy measures. At least this is the belief among economists though there can be a lot of arguments to prove that it cannot be done as easily as it’s proposed. Analysis Every government has to deal with an annual budget. Fiscal policy comes into operation through this annual budget of revenue...
4 Pages (1000 words) Essay

To begin with, many of the policies enacted on citizenship and immigration have brought about incessant controversy in Australia. In addition, the exceeding emphasis put on the multicultural policy has given rather unfavorable outcomes to both Australia and the UK. Policies that are intended to ensure equal representation and opportunities often create frustration and disappointment among certain interest g...

As a result, there is considerable debate over whether world economies will gravitate toward adopting a common Anglo-American corporate governance structure or will...

7 Pages (1750 words) Coursework
sponsored ads
Save Your Time for More Important Things
Let us write or edit the dissertation on your topic "UK Economic Policies" with a personal 20% discount.
GRAB THE BEST PAPER

Let us find you another Dissertation on topic UK Economic Policies for FREE!