Comments (0)
Add to wishlist Delete from wishlist
Cite this document
Summary
The paper "Economy Affection on the Automobile Industry" discusses that the automotive industry in America is currently facing a big challenge for survival. Though huge bailout packages and other measures are in place to assist them, nothing seems to be the right answer to the problem…
Download full paper File format: .doc, available for editing
HIDE THIS PAPERGRAB THE BEST PAPER96.5% of users find it useful 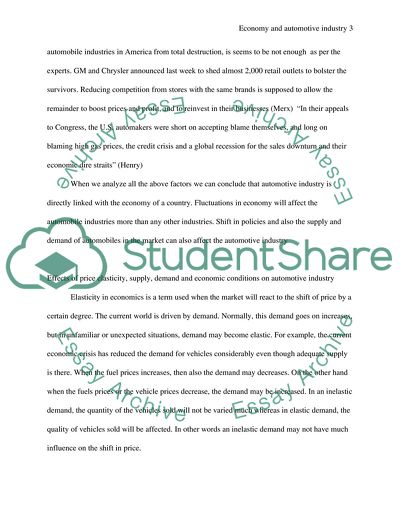 Extract of sample "Economy Affection on the Automobile Industry"

Download file to see previous pages Most of the automobile manufacturers are struggling hard in order to survive in the market. “In 1990, Mexico exported around 180,000 vehicles, whereas in the first 11 months of 2002 manufacturers in Mexico have sent 1.23 million units abroad. (DeMarines) The growth of the automobile industry was huge before the current economic recession starts. Not only Mexico, the leading car manufacturers in Japan, America and Germany were also recorded huge growth in their sales before the unexpected crisis began to affect the whole world.
In November 2008, U.S. sales for the Toyota, Lexus and Scion brands combined fell 33.9 percent; year-to-date sales were down 13.4 percent in the United States, to about 2.1 million, according to Auto Data Corp. (Henry) Inside the 789 Chrysler showrooms to be cast aside, fear is starting to set in as dealers try to figure out what to do with expensive inventories that weren't selling well (MSNBC.com) The proposed $ 700 billion bailout package especially to save the automobile industries in America from total destruction, it seems to be not enough as per the experts. GM and Chrysler announced last week to shed almost 2,000 retail outlets to bolster the survivors. Reducing competition from stores with the same brands is supposed to allow the remainder to boost prices and profit, and to reinvest in their businesses (Merx) “In their appeals to Congress, the U.S. automakers were short on accepting blame themselves, and long on blaming high gas prices, the credit crisis and a global recession for the sales downturn and their economic dire straits” (Henry)
When we analyze all the above factors we can conclude that the automotive industry is directly linked with the economy of a country. Fluctuations in the economy will affect the automobile industries more than any other industries.  ...Download file to see next pages Read More
Share:
Tags
Cite this document
(How the economy has affected the automotive industry Case Study, n.d.)
How the economy has affected the automotive industry Case Study. https://studentshare.org/macro-microeconomics/1556220-how-the-economy-has-affected-the-automotive-industry

“How the Economy Has Affected the Automotive Industry Case Study”. https://studentshare.org/macro-microeconomics/1556220-how-the-economy-has-affected-the-automotive-industry.
Comments (0)
Click to create a comment or rate a document

CHECK THESE SAMPLES OF Economy Affection on the Automobile Industry

6 Pages (1500 words) Coursework
sponsored ads
Save Your Time for More Important Things
Let us write or edit the case study on your topic "Economy Affection on the Automobile Industry" with a personal 20% discount.
GRAB THE BEST PAPER

Let us find you another Case Study on topic Economy Affection on the Automobile Industry for FREE!