Comments (0)
Add to wishlistDelete from wishlist
Cite this document
Summary
The paper "India, the Sleeping Giant, Has Now Awakened" describes that India has reinvented itself through brain power at the detriment of the American economy. It is true that this has led to many Americans losing their jobs and this may also pave the way of America being dethroned from the high seat of innovation…
Download full paperFile format: .doc, available for editing
HIDE THIS PAPERGRAB THE BEST PAPER97.5% of users find it useful 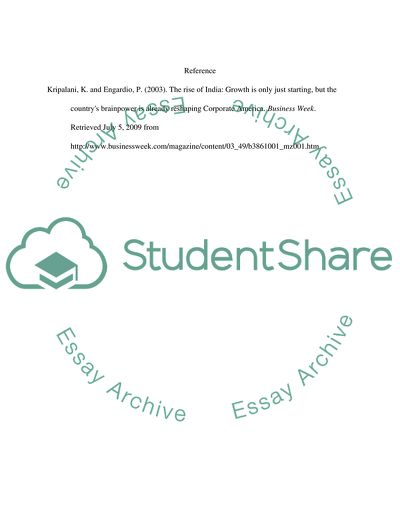 Extract of sample "India, the Sleeping Giant, Has Now Awakened"

﻿India, “the sleeping giant,” has now awakened and has been brought into the forefront of economic progress through “brain power.” In the recent years, India has come to known in the corporate world as being able to provide reliable, bright, and hardworking “digital workers.” Large companies such as GE have made India one of their more important bases of operations, which has engendered a job explosion in the country and a loss of jobs for many Americans. Furthermore, it is not only Americans who outsource, other countries also come to India—and not the U.S. anymore—for the best innovative ideas at a lower cost. Corporate America needs to adjust to the “India Effect” through a retraining of workers and an increase in educational preparation. If the U.S. manages the India Effect in the right way, this could result in “a brain gain that accelerates productivity and innovation” (Kripalani and Engardio, 2003).
India has reinvented itself through brain power at the detriment of the American economy. It is true that this has led to many Americans losing their jobs and this may also pave the way of America being dethroned from the high seat of innovation. However, the authors made a good point by stating that this could also lead to the US being forced to become better and brighter. Banning outsourcing is not the solutionIf this is handled correctly, even in the midst of a recession, the US can emerge from this stronger and more competitive.
Reference
Kripalani, K. and Engardio, P. (2003). The rise of India: Growth is only just starting, but the
country's brainpower is already reshaping Corporate America. Business Week.
Retrieved July 5, 2009 from
http://www.businessweek.com/magazine/content/03_49/b3861001_mz001.htm Read More
Share:
Tags
Cite this document
(“India, the Sleeping Giant, Has Now Awakened Essay”, n.d.)
India, the Sleeping Giant, Has Now Awakened Essay. Retrieved from https://studentshare.org/macro-microeconomics/1556104-1-case-study-information-1-article-critique

“India, the Sleeping Giant, Has Now Awakened Essay”, n.d. https://studentshare.org/macro-microeconomics/1556104-1-case-study-information-1-article-critique.
Comments (0)
Click to create a comment or rate a document

CHECK THESE SAMPLES OF India, the Sleeping Giant, Has Now Awakened

This paper briefly explains the importance of Europe and India in the current world and the mutual economic cooperation between these two regions.
I have used only secondary sources for conducting this research. I have taken ideas from reputed electronic references like JSTOR, Wall Street Journal, BusinessWeek, etc and also from articles written by many reputed authors like Dr. Singh, Gupta, Gabriel Rozman, etc. I tried to find similar arguments in these articles in order to strengthen the claims presented in this paper. Moreover, I tried to explore diverse areas of cooperation between Europe and India in order to write a multifaceted article. I tried to analyze and interpret the ideas taken from the references meaningfully i...
6 Pages(1500 words)Research Proposal
sponsored ads
Save Your Time for More Important Things
Let us write or edit the essay on your topic "India, the Sleeping Giant, Has Now Awakened" with a personal 20% discount.
GRAB THE BEST PAPER

Let us find you another Essay on topic India, the Sleeping Giant, Has Now Awakened for FREE!