Comments (0)
Add to wishlistDelete from wishlist
Cite this document
Summary
From the paper "Economy of the Irish Republic" it is clear that the Irish economy has shed its early inhibitions and downward trends in its economy, which persisted until the 1980s, and is now well set on the road to high-speed economic growth and development…
Download full paperFile format: .doc, available for editing
HIDE THIS PAPERGRAB THE BEST PAPER92% of users find it useful 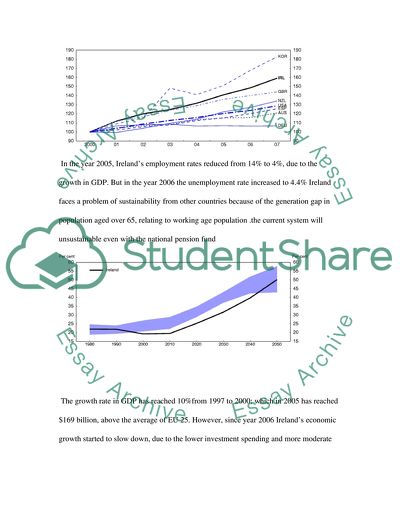 Extract of sample "Economy of the Irish Republic"

Download file to see previous pages “Because Ireland is a small country, FDI has a much more important impact than it does in larger countries such as the U.S., which receives much larger sums of foreign investment.” (Berry).

The housing market helped to sustain growth in recent years as housing investment has reached almost 16% of GNI, but the market has turned since 2006.on the basis GNI growth is expected to decline from 5% in 2007 to 3% in 2008. The housing market weakness also effected badly on increasing the rate of unemployment from 4% in 2006 to 5.5% in 2008. Ireland enjoyed spectacular growth in tax revenues over the past years but this is affected by the economy declining, the government surplus of 3.5% of GNI has reduced into .5% in 2007due to the lower property-related receipts the real government expenditure has expanded rapidly.

In the year 2005, Ireland’s employment rates reduced from 14% to 4%, due to the growth in GDP. But in the year 2006 the unemployment rate increased to 4.4% Ireland faces a problem of sustainability from other countries because of the generation gap in a population aged over 65, relating to the working-age population .the current system will unsustainable even with the national pension fund.

CHECK THESE SAMPLES OF Economy of the Irish Republic

CAR is known to be one of the poorest nations in the African continent, apart from its frequent dependence on international donations in terms of food, clothing and medicinal supplies, CAR has also been a war zone for decades. The essay will relay more information on the various plights that children born in the Central African Republic go through while growing up.
Apart from most of the children being orphaned at a tender age due to maternal related problems or diseases such as HIV/AIDS, which is rampant in the nation, most of these children are victims of child trafficking, which is big business in the CAR (Lindborg). Lots of children from as little as 4 years normally go missing without a trace and the fact that the govern...
7 Pages(1750 words)Term Paper
sponsored ads
Save Your Time for More Important Things
Let us write or edit the case study on your topic "Economy of the Irish Republic" with a personal 20% discount.
GRAB THE BEST PAPER

Let us find you another Case Study on topic Economy of the Irish Republic for FREE!