Comments (0)
Add to wishlist Delete from wishlist
Cite this document
Summary
This paper analyzes and contrast two countries from Asia-Pacific region, i.e., Malaysia and Philippines in terms of economic performance and the factors, that influence that performance. In this essay, factors that have an impact on economic performance of the countries, are identified…
Download full paper File format: .doc, available for editing
HIDE THIS PAPERGRAB THE BEST PAPER98.7% of users find it useful 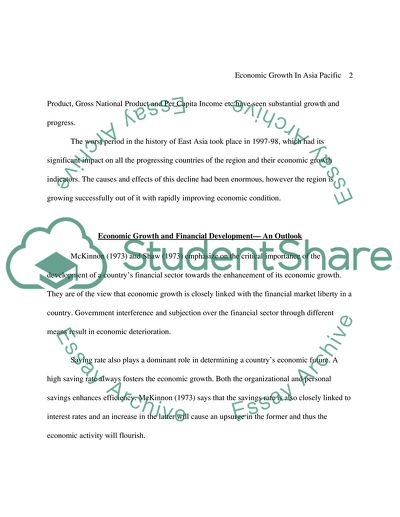 Download file to see previous pages The paper attempts to establish a quantitative relationship between the economic development and the factors affecting it in a cross-national context with particular reference to East Asian countries.
Economic growth in the East Asian region over the last half-century has not been the same in all the countries. The growth in economic performance of a country and the differences underlying the economic conditions of various countries in the region is owing to the factors affecting growth.
McKinnon and Shaw emphasize on the critical importance of the development of a country’s financial sector towards the enhancement of its economic growth. They are of the view that economic growth is closely linked with the financial market liberty in a country. Government interference and subjection over the financial sector through different means result in economic deterioration.
The past (pre-crisis) and recent (post-crisis) economic boost as noticeable in Malaysia is not a matter of coincidence, rather it has been due to the fact that the factors responsible for economic growth prevail and flourish rapidly in the country as discussed throughout the essay. Malaysia has been one of those few countries in the region to be able to recover quickly from the East Asian crisis and thus has rapidly taken a tremendous development track.
On the contrary, the countries having a slower economic growth rate such as Philippines reveal the lagging of factors that undermine a country’s economic growth.
...Download file to see next pages Read More
Share:
Tags
Cite this document
(“The economic growth in the countries of Asia-Pacific region Essay”, n.d.)
The economic growth in the countries of Asia-Pacific region Essay. Retrieved from https://studentshare.org/macro-microeconomics/1537064-the-economic-growth-in-the-countries-of-asia-pacific-region

“The Economic Growth in the Countries of Asia-Pacific Region Essay”, n.d. https://studentshare.org/macro-microeconomics/1537064-the-economic-growth-in-the-countries-of-asia-pacific-region.
Comments (0)
Click to create a comment or rate a document

While each force of globalization is important, the technological revolution has impacted the business models, value creation and differentiation (Spelman, 2010). The cloud computing technologies that have made the popular social networking applications possible are now being applied to development, healthcare, and society. Today mobile telephones are more like powerful computers that take care of many of the societal challenges facing both developed and developing countries (Evans, 2010). In Chile, new software enables weather information to farmers who can now make informed decisions on when and how to sow or harvest the crops. However, the fear or ignorance of cloud computing technology could harm the chances of the SMEs becomi...
7 Pages (1750 words) Coursework

The phenomenon of globalization of markets has resulted in both advantages and disadvantages. It has resulted in the convergence in the requirement of features in a product and augmentation of the intensity of B2B and B2C communica...
7 Pages (1750 words) Coursework

President Andrew Jackson led an example of an administration that set the stage for the way in which James Polk would lead. In 1817, as a still yet military leader, Jackson led the United States into the first of three conflicts with the Seminole Indians from which the acquisition of Florida from Spain would be negotiated and finalized. The situation with Spain was tenuous and should have been dealt with in a diplomatic and cautious manner, but in 1817 President Monroe wrote a letter to General Jackson stating that “Great interests...
8 Pages (2000 words) Article
sponsored ads
Save Your Time for More Important Things
Let us write or edit the essay on your topic "The economic growth in the countries of Asia-Pacific region" with a personal 20% discount.
GRAB THE BEST PAPER

Let us find you another Essay on topic The economic growth in the countries of Asia-Pacific region for FREE!