Comments (0)
Add to wishlist Delete from wishlist
Cite this document
Summary
This essay talks about the reasons behind the financial crisis and proposes some preventative measures for ensuring that such a crash does not occur again. Critical analysis of the effectiveness of proposed measures is conducted, as well as the evaluation of current regulatory framework…
Download full paper File format: .doc, available for editing
HIDE THIS PAPERGRAB THE BEST PAPER97.6% of users find it useful 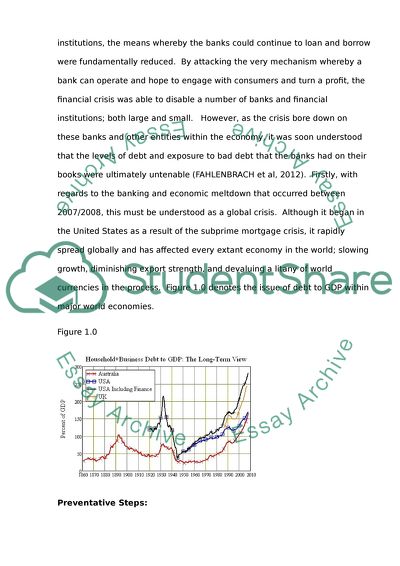 Download file to see previous pages Firstly, with regards to the banking and economic meltdown that occurred between 2007/2008, this must be understood as a global crisis. Although it began in the United States as a result of the subprime mortgage crisis, it rapidly spread globally and has affected every extant economy in the world; slowing growth, diminishing export strength, and devaluing a litany of world currencies in the process. Figure 1.0 denotes the issue of debt to GDP within major world economies. Figure 1.0 Preventative Steps: As a function of the breakdown in regulatory mechanisms capable of dealing with the size of the crash of 2007-2008, many of the largest and most effective regulations have been international in scope. But a few of these global regulations include the Basel III International Framework as well as further EU regulations concerning Markets in Financial Instruments Directives (MiFID). Ultimately, these further regulations, in tandem with existing regulations on the banking sector seek to integrate a set baseline of rules with regards to the standards underlying capital liquidity within the market. Due to the fact that the ultimate issue that the banking system was faced with during the crash was concentric around liquidity, most of the further regulations that have been passed with regards to seeking to provide a remedy to any further exhibitions of the same problem have been concentric upon speaking to the underlying weakness of the liquidity requirements that existed prior to the crash of 2007/2008. In seeking to identify the overall effectiveness of the current regulations, it can be said that they have kept the world from experiencing any further shocks similar to the ones that precipitated the events of 2007/2008; however,...
This essay aims to fully discover the means by which the financial and banking crisis occurred and also seeks to establish whether or not the current regulatory framework is in and of itself sufficient to provide a firewall against any further shocks to the market. The discussion is also briefly concentric upon the future outlook that the global economy has to look forward to; based upon the realities that have been discussed and presented.
The financial crisis of 2007/2008 was predicated by the banks which had leveraged bad debt in order to create more debt for their clients. Ultimately, this can understood as a situation in which certain types of outstanding credits that a bank had in the form of loans to various entities or stock market derivatives were falsely identified as suitable contingents upon which further money could be created and/or loaned within the financial system.
Any further bailouts or interference on the part of the government within the banking system are deemed ineffective. The ramifications of inaction are strong, the fact of the matter is that a precedent has now been set whereby the banking system can behave in a reckless manner, knowing that as long as their bank is large enough to be considered “too large to fail” they can always count on being backed by the government, and ultimately the citizen taxpayers.
The greatest threat that continues to exist is with regards to the economic threat of unsustainable debt; a risk that has only grown in the years since the economic collapse.
...Download file to see next pages Read More
Share:
Tags
Cite this document
(“The Causes of the Financial Crisis and the Overhauling of Regulatory Essay”, n.d.)
Retrieved from https://studentshare.org/macro-microeconomics/1472237-the-causes-of-the-financial-crisis-and-the-overhauling-of-regulatory-framework

(The Causes of the Financial Crisis and the Overhauling of Regulatory Essay)
https://studentshare.org/macro-microeconomics/1472237-the-causes-of-the-financial-crisis-and-the-overhauling-of-regulatory-framework.

“The Causes of the Financial Crisis and the Overhauling of Regulatory Essay”, n.d. https://studentshare.org/macro-microeconomics/1472237-the-causes-of-the-financial-crisis-and-the-overhauling-of-regulatory-framework.
Comments (0)
Click to create a comment or rate a document

... addiction. “The data shows”, Mubeen & Sharif submit, “that most of the drug users had problems in their marriages and some of them had no chance of getting married.” (2007: p 4) The researchers developed the questionnaire as the tool for data collection, which consisted of both open-ended and close-ended questions. The researchers personally visited every respondent for data collection. Their research proved that negligence of parents, family members and elders encouraged the women to take illegal drugs and get adducted consequently. The research also declared emotional collapse as well as financial and domestic problems as one of the most imperative causes of drug addiction among women. There are many weaknesses too in this research...
7 Pages (1750 words) Coursework

13 Pages (3250 words) Assignment
sponsored ads
Save Your Time for More Important Things
Let us write or edit the essay on your topic "The Causes of the Financial Crisis and the Overhauling of Regulatory Framework" with a personal 20% discount.
GRAB THE BEST PAPER

Let us find you another Essay on topic The Causes of the Financial Crisis and the Overhauling of Regulatory Framework for FREE!