Comments (0)
Add to wishlistDelete from wishlist
Cite this document
Summary
Name: Instructor: Course: Date: Final Exam What are the provisions of the No Child Left behind Act? Why do states regard this as an unfunded mandate? The No Child left behind Act requires states to create adequate yearly progress, or AYP, objectives that are consistent several regulations (Olivert 7)…
Download full paperFile format: .doc, available for editing
HIDE THIS PAPERGRAB THE BEST PAPER94.3% of users find it useful 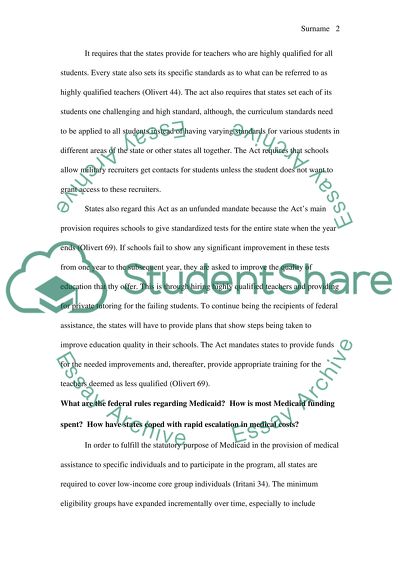 Download file to see previous pages The AYP must also have its basis on assessments by the state, as well as one additional indicator of academic performance. The objectives also need to be set out with the aim of having all learners gaining at least a proficiency level in the next twelve years, i.e., by the 2013-2014 academic year (Olivert 43). The adequate yearly progress objective also need to be evaluated at the school level, with schools failing to meet the laid down objectives for two years in a row being marked for improvement. The AYP results for the mentioned special groups of children need to be reported as a separate entity, in order to determine whether the student groups were able to meet their objectives for AYP. In addition, at least ninety-five percent of every group needs to participate in these statewide assessments. Finally, states can aggregate their data for up to three years in their determination of AYP. It requires that the states provide for teachers who are highly qualified for all students. Every state also sets its specific standards as to what can be referred to as highly qualified teachers (Olivert 44). The act also requires that states set each of its students one challenging and high standard, although, the curriculum standards need to be applied to all students instead of having varying standards for various students in different areas of the state or other states all together. The Act requires that schools allow military recruiters get contacts for students unless the student does not want to grant access to these recruiters. States also regard this Act as an unfunded mandate because the Act’s main provision requires schools to give standardized tests for the entire state when the year ends (Olivert 69). If schools fail to show any significant improvement in these tests from one year to the subsequent year, they are asked to improve the quality of education that thy offer. This is through hiring highly qualified teachers and providing for private tutoring for the failing students. To continue being the recipients of federal assistance, the states will have to provide plans that show steps being taken to improve education quality in their schools. The Act mandates states to provide funds for the needed improvements and, thereafter, provide appropriate training for the teachers deemed as less qualified (Olivert 69). What are the federal rules regarding Medicaid? How is most Medicaid funding spent? How have states coped with rapid escalation in medical costs? In order to fulfill the statutory purpose of Medicaid in the provision of medical assistance to specific individuals and to participate in the program, all states are required to cover low-income core group individuals (Iritani 34). The minimum eligibility groups have expanded incrementally over time, especially to include pregnant women and children, disabled individuals, the elderly, and parents up to the income levels specified. Another rule requires that the ACA is inclusive of maintenance of effort requirement that keeps CHIP and Medicaid coverage stable until reform expands coverage. The federal government also requires that enrollees to be provided, with a core set of benefits that are mandatory and specific cost sharing protections in order to participate in this program. In addition, the states are largely in charge of determining provider payments within the limits of federal requirements. The federal government requires payments to be consistent with access, quality, economy, ...Download file to see next pagesRead More
Share:
Tags
Cite this document
(“Assignment Essay Example | Topics and Well Written Essays - 1000 words”, n.d.)
Assignment Essay Example | Topics and Well Written Essays - 1000 words. Retrieved from https://studentshare.org/macro-microeconomics/1465333-assignment
(Assignment Essay Example | Topics and Well Written Essays - 1000 Words)
Assignment Essay Example | Topics and Well Written Essays - 1000 Words. https://studentshare.org/macro-microeconomics/1465333-assignment.
“Assignment Essay Example | Topics and Well Written Essays - 1000 Words”, n.d. https://studentshare.org/macro-microeconomics/1465333-assignment.
Comments (0)
Click to create a comment or rate a document

Davids Oath of the Horatii

Also, the usage of color, light sources, and the overall compositions of the works contribute to different interpretations of warfare. This shift in the ideology of art reflects the confrontation between an accepted method of painting and new schools of thought. Both David and Goya are considered masters of their respective disciplines and these two works are indicative of the shift from the neoclassical to romantic schools of painting.
David’s, Oath of the Horatii presents the idealized vision of war as depicted by the neoclassical tradition. Neoclassicism is defined as works of art that were heavily influenced by classical works from ancient civilizations, especially the Greek and Roman empires (Gontar). During the re...
9 Pages(2250 words)Assignment

He previously referred to Indians as “dull, stupid people, of the ordinary stature and far from comely.” After he saw and observed the Chumash, however, he remarked that they seemed to be “a race of people quite distinct from the other aboriginals of the country” (Rawls 47). Today, the Chumash Indians have dwindled in number, many of whom live in a reservation in Santa Ynez. The Chumash are trying to remember their past by keeping Chumash traditions but their growing susceptibility to a fast-changing world can barely be kept with the trappings of modernity, like a casino resort, right in the middle of their community.
The Chumash, also known as the Santa Barbara Indians, originally established themselv...
7 Pages(1750 words)Assignment

In a similar fashion, the attitude of people towards the charitable services of Bell Shakespeare could also be found out. The hypotheses could be framed in a similar manner as above and the tests conducted to arrive at results are also the same as before. The only difference is between the dependent and the independent variables which are as follows –
In the first case, the appropriate test that needs to be carried out to check the hypotheses is the Student’s t-test (Kerr A. W., Hall H.K. & Kozub S., 2002, pp70; Schumacker, R.E., Akers, A., 2001, pp341; Edgington, E.S., 1995, pp111) and in the latter case, the suitable tests will be the F-test.
The attitude of the people towards Bell’s charitable se...
12 Pages(3000 words)Assignment

Do we not love the pleasant chill that travels down our spine when we believe ourselves to be in the presence of something greater than we can comprehend? We shudder and yet want to hear more and convince ourselves that there must be some truth in the whole story, until we arrive at a self-fulfilling prophecy, much the same as those contained in our daily horoscopes. But let us analyze more closely how Nostradamus’ prophecies fare when we examine them in the cold light of day and of reason.
Nostradamus was born in 1503 in Saint-Rémy-de-Provence, Southern France. He published a book of one thousand mainly French quatrains (four-line verse) in a book entitled Les Propheties, which contain his prophecies. Many of th...
6 Pages(1500 words)Assignment

For example, for farming communities, fertile and well-watered land has been a pull factor in migration. Business opportunities and political stability are also examples of pull factors.
Since the turn of the 20th century, Great Britain and Northern Ireland have experienced a great influx of foreigners migrating into the country due to pull or push factors. There have been different waves of migrations to the United Kingdom, which has had different impacts. Because of this, the United Kingdom has had to respond in several ways, which includes coming up with new acts on immigration, nationality, and providing asylum to refugees.1 However, the topic of migration to the United Kingdom has attracted different political views and...
23 Pages(5750 words)Assignment
sponsored ads
Save Your Time for More Important Things
Let us write or edit the essay on your topic "Assignment" with a personal 20% discount.
GRAB THE BEST PAPER

Let us find you another Essay on topic Assignment for FREE!