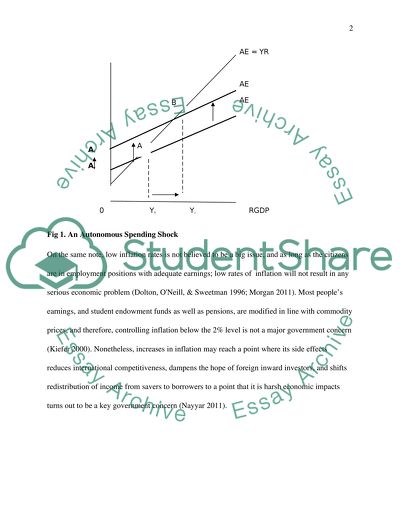 Download file to see previous pages This paper offer a comprehensive review of the relative effectiveness of the different tools of macroeconomic policy, adopted by a different country`s governments, in attaining main macroeconomic objectives. The various theories, that suggest priority in utilization of specific tool, often interrelate and are applied by governments primarily to achieve sustainable economic growth.
Generally, fiscal policy and monetary policy are used by the government to achieve the macroeconomic objectives. Whereas, fiscal policy is implemented by government through spending and taxation, monetary policy is essentially the responsibility of the central bank, through the controls of interest rates and the supply of currency. Both policies are implemented to reduce inflation rates and joblessness.
Whereas, each macroeconomic goals can have repercussions on economic factors if they spiral out of control, a number essentially have a more significant impact on citizens. High rate of joblessness not only translates into lost revenue for the government, but can signify a permanent reduction in an individual’s chances of securing employment through loss of expertise.
Low inflation rates is not a big issue, and as long as the citizens are in employment positions with adequate earnings; low rates of inflation will not result in any economic problem. Most people’s earnings, student endowment funds as well as pensions, are modified in line with commodity prices, and therefore, controlling inflation below the 2% level is not a major government concern.
(Kiefer 2000). Nonetheless, increases in inflation may reach a point where its side effects reduces international competitiveness, dampens the hope of foreign inward investors, and shifts redistribution of income from savers to borrowers to a point that it is harsh economic impacts turns out to be a key government concern (Nayyar 2011). Fig 2. Aggregate Expenditure According to Jin (2007), a current account shortfall on the balance of payments may be of less significance to government organizations, especially if the capital markets and the national currency are stable. Conversely, this may imply that an economy’s expenditures have stretched past its revenue collection, and at a given point the expenditure will have to be countered by substantial inflows. The United Kingdom, for instance, has massive foreign investments with substantial revenue potential, which may imply the shortfall will be checked if the economic condition is left to take its own course (Fig 2). According to Kiefer (2008), whereas, governments should not attempt to correct current account shortfalls with demand management practices: policies leaning toward supply have shown better results in regard to the restoration of permanent competitiveness of the economy. According to Froud, Moran, Nilsson and Williams (2010), the most controversial of government objectives is the policy of imposing more taxes on the higher-end population and handing it to the lower-end, in order to bridge the gap between the two economic segments. Kiefer (2000), point out that redistributing revenue from the moneyed to the poor via ...Download file to see next pagesRead More
Share:
Tags
Cite this document
(“Macroeconomics Objectives of Governments Essay Example | Topics and Well Written Essays - 1500 words”, n.d.)
Retrieved from https://studentshare.org/macro-microeconomics/1455684-re-assessment

CHECK THESE SAMPLES OF Macroeconomics Objectives of Governments

We also discovered cases where such cooperation was with governments that were involved with issues that a civilized world would not countenance, such as human rights. In the majority of cases though, we discovered that TNC’s were more likely to actively use their influence to persuade or even reverse government policies.
How do Transnational Corporations co-operate and interact with the governments of the countries where they have a business presence? With the rapid growth of the numbers of such corporations and their impact on the global labor and financial markets, this is becoming one of the key issues of the twenty-first century, both for politicians and increasingly the general public as well. However, informed ob...
11 Pages(2750 words)Research Proposal

Peter Hain, Secretary of State for Wales speaking at Westminster Hall on the Convention on the Future of Europe noted that ‘the protocols envisage a formal role for national parliaments.

A treaty establishing a constitution for Europe was signed on 29 October 2004 in Rome and is required to be ratified by all Member States by November 1, 2006.3 Articles 1-2 of the Constitutional Treaty are consistent with the main goals expressed by the Laeken Declaration. The opening Articles declare that the European Union is founded upon mutual respect for basic human dignity, democracy, equality, human rights and the rule of law in general. The Articles go on to maintain that these goals and values are the mutual concern of al...
12 Pages(3000 words)Term Paper

...CHAPTER 04 (MACROECONOMIC COORDINATION) We know that when GDP, APE & ASF are unequal, than an interplay occurs (Macroeconomic coordination process) which bridges the gap between these variables. If there is a disparity between ADF & ASF, there will be an automatic reaction among money users & suppliers which restores the magnitude of these variables to equality generally known as funding adjustment. Similarly, if there is a difference in the values of GDP & APE, it will trigger the suppliers of goods & services to act together and bring the figure close to equality. This process is called output-price adjustment. The purchasers of the domestic output can be classified into three groups. Group 1 involves individuals having sufficient money...
6 Pages(1500 words)Assignment

... of such pristine places. Limiting the number of people to visit a certain area is not sufficient enough for protecting such areas from the effects of visitation. There are chances that people may buy access considering that most tourists are wealthy and can afford to. Involvement of all the stakeholders in the protection measures of the cultural heritage is key to achieving this objective. The government should invest in public awareness of the importance of conservation of the pristine places. The government should also promote fair use of cultural sites by establishing criteria of use, different from limiting policies (Heidelberg, 2014). Ecotourism principles suggest that a site should have a small number of visitors in order to maintain...
7 Pages(1750 words)Essay
sponsored ads
Save Your Time for More Important Things
Let us write or edit the essay on your topic "Macroeconomics Objectives of Governments" with a personal 20% discount.
GRAB THE BEST PAPER

Let us find you another Essay on topic Macroeconomics Objectives of Governments for FREE!