Comments (0)
Add to wishlistDelete from wishlist
Cite this document
Summary
The author concludes that Oryx Energy Company continues to prove itself worthy among other companies in the petroleum production industry all around the world. The dedication of personnel ensures the organization’s growth through its capitalizing on other ventures. …
Download full paperFile format: .doc, available for editing
HIDE THIS PAPERGRAB THE BEST PAPER92.6% of users find it useful 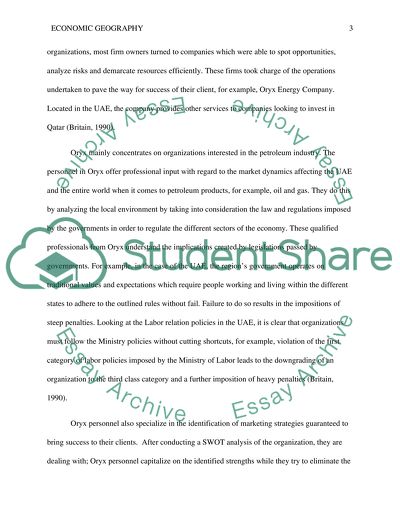 ﻿
Economic geography
Oryx Energy Company; incorporated in 1971; is a company which deals in oil production, around the world. Its main headquarters are in Dallas, Texas, however, throughout the years, the company has expanded providing different services across the globe. When not developing or producing oil products, its subsidiary branches continually provide value added services to other companies in this sector, for example, in the UAE. A brief look at the background history of Oryx Energy Company shows that the company emerged from the Sun Oil Company which underwent reorganization in 1988 (James, 1993). However, before Sun Oil Company, there was a lot of mergers and acquisitions of other smaller companies. Sun Oil concentrated on the rising need of states in the USA to meet their daily petroleum products requirements. The owners, therefore, chose to capitalize on this need by looking for the products needed in the Gulf of Mexico, Ecuador among other places. They then started producing oil and gas products making it available to consumers. With time, the company noted the completion posed by petroleum based companies located in the East; therefore, they decided to venture in similar prospects, within the region. However, since the region already had established companies venturing petroleum prospects necessitated Oryx to provide other services that would give them an added advantage over the established companies. Therefore, they begun to provide value added services.
The unification of the Emirates states to form the United Arab Emirates (UAE) opened the region up to investment opportunities in the different economic sectors. Both internal and external investors grasped these opportunities and embarked on entrepreneurial ventures, which promised substantial returns if proven successful. Therefore, to ensure the success of these organizations, most firm owners turned to companies which were able to spot opportunities, analyze risks and demarcate resources efficiently. These firms took charge of the operations undertaken to pave the way for success of their client, for example, Oryx Energy Company. Located in the UAE, the company provides other services to companies looking to invest in Qatar (Britain, 1990).
Oryx mainly concentrates on organizations interested in the petroleum industry. The personnel in Oryx offer professional input with regard to the market dynamics affecting the UAE and the entire world when it comes to petroleum products, for example, oil and gas. They do this by analyzing the local environment by taking into consideration the law and regulations imposed by the governments in order to regulate the different sectors of the economy. These qualified professionals from Oryx understand the implications created by legislations passed by governments. For example, in the case of the UAE, the region’s government operates on traditional values and expectations which require people working and living within the different states to adhere to the outlined rules without fail. Failure to do so results in the impositions of steep penalties. Looking at the Labor relation policies in the UAE, it is clear that organizations must follow the Ministry policies without cutting shortcuts, for example, violation of the first category of labor policies imposed by the Ministry of Labor leads to the downgrading of an organization to the third class category and a further imposition of heavy penalties (Britain, 1990).
Oryx personnel also specialize in the identification of marketing strategies guaranteed to bring success to their clients. After conducting a SWOT analysis of the organization, they are dealing with; Oryx personnel capitalize on the identified strengths while they try to eliminate the weaknesses and threats identified. This allows for early identification of new marketing strategies that would boost the organization’s income. On the other hand, avoiding the threats and eliminating weaknesses ensures the organization does not expose itself to losses as a result of poor marketing strategies. In the case of companies dealing in petroleum, it would be beneficial to identify the target market in order to know what products to produce (James, 1993).
In conclusion, Oryx Energy Company continues to prove itself worthy among other companies in the petroleum production industry all around the world. The dedication of personnel ensures the organization’s growth through its capitalizing on other ventures; for example provision of value added services in the UAE. Therefore, Oryx involvement with petroleum production ventures and the provision of value added services ensures the generation of more income. The fact that they study the local environment before going into business also ensures their strategies follow the requirements presented. This avoids the organization from getting affected by unforeseen obstacles (Britain, 1990).
References
Britain, E. I. (1990). Country report: United Arab Emirates. London: The Unit .
James, S. (1993, June 11). Oryx Energy Company . Retrieved from Funding Universe: http://www.fundinguniverse.com/company-histories/oryx-energy-company-company-history.html Read More
Share:
Tags
Cite this document
(“Economic Geography: Oryx Energy Company Assignment”, n.d.)
Economic Geography: Oryx Energy Company Assignment. Retrieved from https://studentshare.org/macro-microeconomics/1451241-econmoic-geography

As a principle, HP doesn’t reveal non-public product details, financial information, marketing, R &D, manufacturing, and Personnel Data. We will work on whatever information the company discloses and is available in the common domain of knowledge to assess our strengths, marketing mix, current strategies, current events, and global information and discuss how they can be more streamlined in. In today’s world, no amount of market strategizing is enough, no amount of competitor’s latest strategies and innovation and we have always to remain in an ever-evolving role.
We have chosen our Personal Computer as the product of our current study. Just for sake of recall, we make mention of current product segmenta...
8 Pages(2000 words)Case Study

Let us find you another Assignment on topic Economic Geography: Oryx Energy Company for FREE!