Comments (0)
Add to wishlistDelete from wishlist
Cite this document
Summary
Competitive and Free Markets Name: University: A competitive market is one that has many buyers and sellers in the market hence not one buyer or seller has the power to manipulate price. There are two extremes in a market. At one end there is a perfectly competitive market where there are many firms competing hence each firm is relatively small as compared to the industry and so has no influence on price…
Download full paperFile format: .doc, available for editing
HIDE THIS PAPERGRAB THE BEST PAPER93.5% of users find it useful 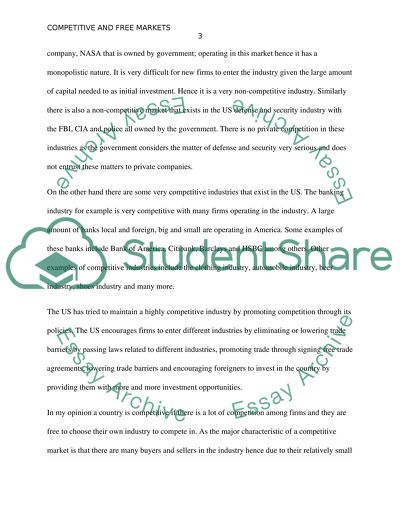 Download file to see previous pages In the real world these four characteristics do not hold true. Products are not homogenous, there are some barriers to entry or exit, there is imperfect information available in the market and sometimes there are significant transaction costs. In 2010 the US dropped from the number one competitive market to the third most competitive market in the world. The number one position was occupied by Switzerland while Hong Kong came in and retained its number two spot (Pravda 2010). Although compared to other countries US is more competitive there are some industries where there is no competition. One example of such an industry is the space industry. There is just one company, NASA that is owned by government; operating in this market hence it has a monopolistic nature. It is very difficult for new firms to enter the industry given the large amount of capital needed to as initial investment. Hence it is a very non-competitive industry. Similarly there is also a non-competitive market that exists in the US defense and security industry with the FBI, CIA and police all owned by the government. There is no private competition in these industries as the government considers the matter of defense and security very serious and does not entrust these matters to private companies. On the other hand there are some very competitive industries that exist in the US. The banking industry for example is very competitive with many firms operating in the industry. A large amount of banks local and foreign, big and small are operating in America. Some examples of these banks include Bank of America, Citibank, Barclays and HSBC among others. Other examples of competitive industries include the clothing industry, automobile industry, beer industry, shoes industry and many more. The US has tried to maintain a highly competitive industry by promoting competition through its policies. The US encourages firms to enter different industries by eliminating or lowering trade barriers by passing laws related to different industries, promoting trade through signing free trade agreements, lowering trade barriers and encouraging foreigners to invest in the country by providing them with more and more investment opportunities. In my opinion a country is competitive if there is a lot of competition among firms and they are free to choose their own industry to compete in. As the major characteristic of a competitive market is that there are many buyers and sellers in the industry hence due to their relatively small size in the market they are not able to influence market factors such as price. Hence if a market has many firms which have a small market share and are not able to influence market price, such markets can be considered as competitive. Similarly the other three characteristics of a competitive market must also be present in the market for such a market to be competitive. For a market to be labeled as a ‘ ...Download file to see next pagesRead More
Share:
Tags
Cite this document
(“Competitive Markets & Free-Market Economies Essay”, n.d.)
Competitive Markets & Free-Market Economies Essay. Retrieved from https://studentshare.org/macro-microeconomics/1439152-competitive-markets-free-market-economies
(Competitive Markets & Free-Market Economies Essay)
Competitive Markets & Free-Market Economies Essay. https://studentshare.org/macro-microeconomics/1439152-competitive-markets-free-market-economies.
“Competitive Markets & Free-Market Economies Essay”, n.d. https://studentshare.org/macro-microeconomics/1439152-competitive-markets-free-market-economies.
Comments (0)
Click to create a comment or rate a document

... which Modelo decided to capture the target market. Gambrinus was also an experienced distributor which was operating in other 25 states in the country. There was huge competition between these two distributors although they were not catering to the same geographical market. According to Modelo’s strategy, distributors were responsible for all activities regarding the transport, custom clearance, insurance, pricing strategy, advertising campaigns and sale of the beer. However Modelo reserved the right of final decision regarding the brand image. Furthermore a subsidiary named Procermex Inc. was set up by Modelo with the purpose of coordinating, supporting and supervising the two distributors of the company. The company maintained a healthy...
7 Pages(1750 words)Assignment
sponsored ads
Save Your Time for More Important Things
Let us write or edit the essay on your topic "Competitive Markets & Free-Market Economies" with a personal 20% discount.
GRAB THE BEST PAPER

Let us find you another Essay on topic Competitive Markets & Free-Market Economies for FREE!