Comments (0)
Add to wishlistDelete from wishlist
Cite this document
Summary
The paper "Asian Tigers: South Korea, Taiwan, Hong Kong, and Singapore" outlines that the Asian tigers were very poor thus labor was cheap and in abundance. They then made educational reforms and coupled this with the cheap labor to establish productive workforces.   …
Download full paperFile format: .doc, available for editing
HIDE THIS PAPERGRAB THE BEST PAPER94.5% of users find it useful 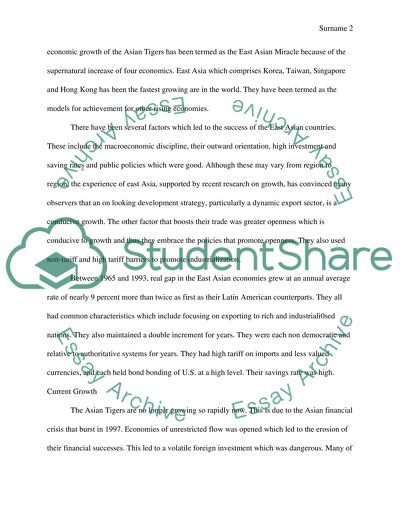 Download file to see previous pages The growth of the ' Asian Tigers' in the 1960s In the 1960s, the Asian tigers were very poor thus labor was cheap, and in abundance. They then made educational reforms and coupled this with the cheap labor to establish productive workforces. In order to improve productivity, they focused on improving education at all levels with more emphasis on elementary education and compulsory high school education. College and university system was also improved by setting aside some money for the same. For economic development, they pursued an export-driven model whereby they focused on the manufacture of goods for export to nations that are highly industrialized. They discouraged domestic consumption through government policies such as high tariffs. The economic growth of the Asian Tigers has been termed as the East Asian Miracle because of the supernatural increase of four economics. East Asia which comprises Korea, Taiwan, Singapore, and Hong Kong has been the fastest growing area in the world. They have been termed as the models for achievement for other rising economies. There have been several factors that led to the success of the East Asian countries. These include the macroeconomic discipline, their outward orientation, high investment and saving rates and public policies which were good. Although these may vary from region to region, the experience of East Asia, supported by recent research on growth, has convinced many observers that an onlooking development strategy, particularly a dynamic export sector, is a conducive growth. The other factor that boosts their trade was greater openness which is conducive to growth and thus they embrace the policies that promote openness. They also used non-tariff and high tariff barriers to promote industrialization. Between 1965 and 1993, the real gap in the East Asian economies grew at an annual average rate of nearly 9 percent more than twice as first as their Latin American counterparts. They all had common characteristics which include focusing on exporting to rich and industriali0sed nations. They also maintained a double increment for years.  ...Download file to see next pagesRead More
Share:
Tags
Cite this document
(“Asian Tigers Essay Example | Topics and Well Written Essays - 1250 words”, n.d.)
Retrieved from https://studentshare.org/macro-microeconomics/1425951-asian-tigers
(Asian Tigers Essay Example | Topics and Well Written Essays - 1250 Words)
https://studentshare.org/macro-microeconomics/1425951-asian-tigers.
“Asian Tigers Essay Example | Topics and Well Written Essays - 1250 Words”, n.d. https://studentshare.org/macro-microeconomics/1425951-asian-tigers.
Comments (0)
Click to create a comment or rate a document

An Asian Miracle - Myth or Reality

To this was added the ‘entered’ Philippines (Billington, 1997). Japan experienced year after year of economic growth for 30 years while the other countries could sustain it only up to the mid-1990s.
Each of these countries had adopted strategic macroeconomic management disciplines. Rather than allow their country to be ‘colonized’, by foreign capital, they preferred to take their own initiative. The state played a key role in each case by way of mobilizing resources, supporting technology transfer, and inviting Foreign Direct Investment from developed countries. South Korea, Taiwan, Thailand, Indonesia, and Malaysia also received support from International economic agencies like the IMF, World Bank, AD...
6 Pages(1500 words)Assignment

Despite the few negative incidences of crime committed by the United States of America’s security troops that were deployed in the country on a peacekeeping mission.
Since the war in Korea began in the early nineteen fifties, the United States has stationed tens of thousands of soldiers, mostly the United States’ army personnel, in South Korea. Through the assistance of the South Korean troops and other neighboring governments, the American troops have been able to guard and offer maximum security to South Korean people. In line with the argument of James (2003), ‘most of the military bases in South Korea are relatively isolated’ thus the need for much attention from the troops so as to ensure maximum...
10 Pages(2500 words)Assignment
sponsored ads
Save Your Time for More Important Things
Let us write or edit the case study on your topic "Asian Tigers: South Korea, Taiwan, Hong Kong and Singapore" with a personal 20% discount.
GRAB THE BEST PAPER

Let us find you another Case Study on topic Asian Tigers: South Korea, Taiwan, Hong Kong and Singapore for FREE!