Comments (0)
Add to wishlist Delete from wishlist
Cite this document
Summary
1. What constitutes a crime varies across people, places and time. You are required to examine different definitions of crime and comment on the function of the criminal law in addressing crime levels in the UK.  One definition of crime defines it as “an act or omission that leads to penal sanction in accordance with the constitutionally valid procedures of that nation state” (Morrison, 16)…
Download full paper File format: .doc, available for editing
HIDE THIS PAPERGRAB THE BEST PAPER95.9% of users find it useful 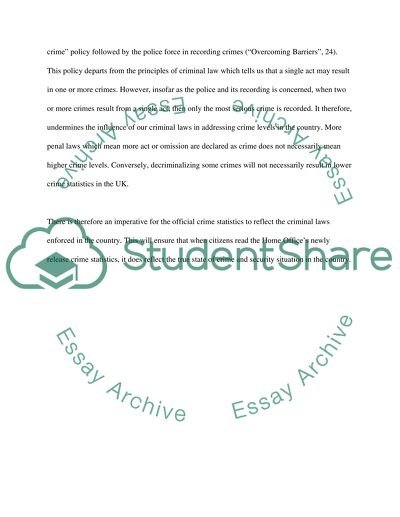 Download file to see previous pages I believe that more than the definition of crime, citizens are more concerned on what makes an act or omission a crime. The latter keeps them out of trouble and out of the ambit of criminal justice system. Crime is relative. An act may be a crime in the UK but is legally permissible in another country. It all depends on the sovereign state’s law-making body whether or not to declare certain actions or inactions as crime. Although there are acts which are declared as crime in all jurisdictions, for instance, murder, there will never be a universal consensus as to what constitutes a crime. As a necessary consequence, there will never be a universal benchmark in measuring crime levels in each country. In the UK, I am of the opinion that our criminal laws and changes thereon does not necessarily result in changes in UK crime levels. This is because the Home Office has developed its own method of counting crimes and arriving at an annual crime statistics which is rather independent of our criminal laws. Noteworthy of this method is the “one crime per victim” and “no victim no crime” policy followed by the police force in recording crimes (“Overcoming Barriers”, 24). This policy departs from the principles of criminal law which tells us that a single act may result in one or more crimes. However, insofar as the police and its recording is concerned, when two or more crimes result from a single act, then only the most serious crime is recorded. It therefore, undermines the influence of our criminal laws in addressing crime levels in the country. More penal laws which mean more act or omission are declared as crime does not necessarily mean higher crime levels. Conversely, decriminalizing some crimes will not necessarily result in lower crime statistics in the UK. There is therefore an imperative for the official crime statistics to reflect the criminal laws enforced in the country. This will ensure that when citizens read the Home Office’s newly release crime statistics, it does reflect the true state of crime and security situation in the country. 2. Criminal offences usually require actus reus and mens rea, although some crimes are crimes of strict liability.  (i) Explain, using examples, the meaning of the term actus reus.  The term actus reus refers to the malfeasance and nonfeasance which must be proved beyond a reasonable doubt in order to convict the accused. Stated otherwise, actus reus means the overt act or the failure to act which when coupled with material circumstances and consequences produces a crime. It may also include a particular state of affairs which may come in combination with the act or omission. Actus reus is a material element of a crime. In order to incur criminal liability, an act must be voluntary. It must not be coerced or performed involuntarily as in the case of being in a state of hypnotism and automatism. However, when the accused came under the aforementioned state of involuntary movements under their own fault or will, these will not serve as exculpatory circumstance in favor of the accused. Needless to state, self-induced intoxication will never be a defense and will never bar prosecution for the crime committed while under the influence of drugs or alcohol. Actus reus as an omission must stem from a lawful duty which may be established from statute, contract or relationship. A concrete example of ...Download file to see next pages Read More
Share:
Tags
Cite this document
(“Criminal law Essay Example | Topics and Well Written Essays - 1500 words”, n.d.)
Retrieved from https://studentshare.org/macro-microeconomics/1423848-criminal-law

CHECK THESE SAMPLES OF Criminal law

New and complex issues have arisen which demanded fresh understanding and handling of cases involved them. This has resulted in the enhanced development of specialized laws e.g. cyber laws and interpretation of those laws. The same is true with Media Laws. Media has developed much in the last half-century. As it evolved as a profession and more people started to join it, there arose the levels of money involved in it. With this grew the contractual obligations on the parts of parties and concerned laws e.g. patent laws, privacy laws, and copyrights laws, etc. also started to play their parts. With these issues, the role of law in the media industry also reached a new height.
Mathew Fisher, the appellant, joined a band with Mr...
6 Pages (1500 words) Assignment
sponsored ads
Save Your Time for More Important Things
Let us write or edit the essay on your topic "Criminal law" with a personal 20% discount.
GRAB THE BEST PAPER

Let us find you another Essay on topic Criminal law for FREE!